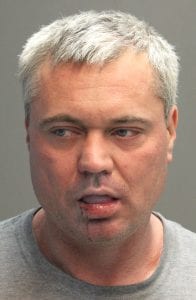 WESTFIELD – A former city man who allegedly assaulted his girlfriend (who is also his cousin) twice in two days has been held pending trial.
City police report in court documents that Mark A. Nikiel, 45, of 51 Hamilton St., Holyoke, was arrested Feb. 7, when police responded a reported domestic dispute at a Franklin Street address.
Officer Steven Wood reports that the alleged victim said that “her head was pushed into the wall of her living room and held down on the ground by the defendant.” She also told Wood that Nikiel broke her dresser and mirror.
Arrested for assault and battery on a family or household member and malicious destruction of property valued less than $1,200, Nikiel was arraigned in Westfield District Court before Judge William O’Grady and released on $5,000 personal surety pending a March 23 hearing.
However, Nikiel was back in court much sooner.
The next evening, police again responded to a report of a domestic disturbance at the victim’s home and Officer Sean Smith reports that Nikiel “did commit Domestic Assault and Battery by shoving the victim, his cousin, with whom he has been involved in a substantial dating relationship, into a wall.”
Smith reports that the victim said that Nikiel has been living at her address since Thanksgiving, 2019.
Arrested again, Nikiel was returned to Westfield District Court Feb. 10 where he was arraigned before Judge William A. Rota who allowed a Commonwealth motion to revoke bail so Nikiel was held pending a March 4 hearing.
Nikiel has a history in the Westfield court but previous charges (when he was living at a Conner Avenue address in Westfield) have not apparently involved violence.
A check of his criminal history reveals about 65 offenses which have sent him to jail on at least six occasions, mostly for narcotics offenses but on two occasions he was jailed after convictions for shoplifting and trespass.
In 2012, Nikiel was arrested while in possession of 213 bags of heroin and that case was heard in Superior Court. His conviction there sent him to state prison.