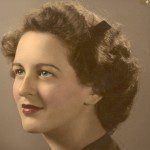 MONTGOMERY – Marguerite F. (Meyer ) Wolcott, 90, of Montgomery died Saturday, February 16, 2013 at home surrounded by her loving family. She was born in Shillong, India daughter of the late Sidney and Dorothy Meyer and was educated in Switzerland at the Convent of the Sacred Heart School ,where she was the captain of the tennis team. Higher education was then completed in England. Marguerite was a Captain in the British Army during World War II, where she met her husband David, who was serving with the U.S Army Remount. After the war they owned a five hundred acre farm in Worthington, and lived in Wyben for many years. She was an avid golfer and longtime member of Blandford Country Club. She spent many winters with her husband at Jekyll Island, Georgia.
Marguerite is survived by her loving husband of sixty-seven years, David; a son, David and his wife Roberta of Montgomery; a daughter, Lindsey and her husband Lee Chappell of Chichester, England; a brother, John and a sister, Daphne, predeceased by brother Hugh all of England. She also leaves ten grandchildren and seven great-grandchildren.
Her funeral will be held on Thursday at 9:00 a.m. from Firtion-Adams Funeral Service, 76 Broad Street, Westfield followed by a Liturgy of Christian Burial in Our Lady of the Blessed Sacrament Parish, 127 Holyoke Road, Westfield at 10:00 a.m. Burial will follow at Pine Hill Cemetery. Calling hours will be held at the funeral home on Wednesday from 4:00 p.m. until 7:00 p.m.
Donations may be made in her memory to the Alzheimer’s Association, 264 Cottage, Springfield, MA 01104.
firtionadams.com