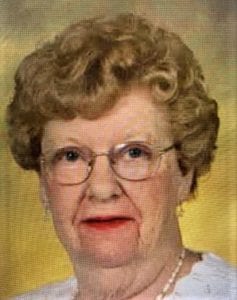 – Marion Elizabeth (Luhn) Whitney passed away peacefully the morning of Sept. 8, 2019 at age 95. Born on March 9, 1924 in Hartford, CT to the late George and Esther (Anderson) Luhn, she graduated from Bulkeley High School in 1942. During World War II, she served in the U.S. Navy WAVES. She was a Past Commander of Jane DeLano Post 7 in Hartford, CT and a member of American Legion Post 124 in Westfield. In her youth, Marion was a Rainbow Girl belonging to Hartford Assembly #9. Years later, Marion helped start Westfield Assembly #96, Order of Rainbow for Girls and served for many years as the Mother Advisor. In the Order of Eastern Star, Marion was a Past Matron and a 50 year member of Golden Chapter #5. She was a former member of the Second Congregational Church, active as the Superintendent of Sunday School, and Church Secretary for 20 years before retiring in 1989. More recently, Marion was a member of the Granville Federated Church of Granville, MA. Predeceased by her beloved husband of 54 years, Charles W. who passed away in 2003, Marion leaves her son Robert G. of West Springfield; Stuart L. and his wife Susanne of Waterbury Center, VT; and Carl W. and his wife Robin of Westfield. She also leaves four grandchildren: Kiera (and Jack) Haley of Burlington, MA; Ryan (and Melissa) Whitney of Westfield; Meredith Whitney of Waterbury Center, VT; and Samuel Whitney of Stowe, VT, as well as two great grandchildren: Gracie Whitney and Walker Haley. The family will welcome friends for a visiting hour on Thursday, September 12 from 1:00 to 2:00 at the United Church of Christ, Second Congregational Church, 487 Western Avenue, Westfield, MA. The funeral service will begin at 2:00 p.m. followed by refreshments in the Founders’ Room of the church. Following the reception, burial will be at Pine Hill Cemetery for all who wish to join the family. Donations may be made in Marion’s memory to the Shriners Hospital for Children – Springfield, 516 Carew Street, Springfield, MA 01104. Firtion-Adams Funeral Home is in charge of the arrangements. firtionadams.com