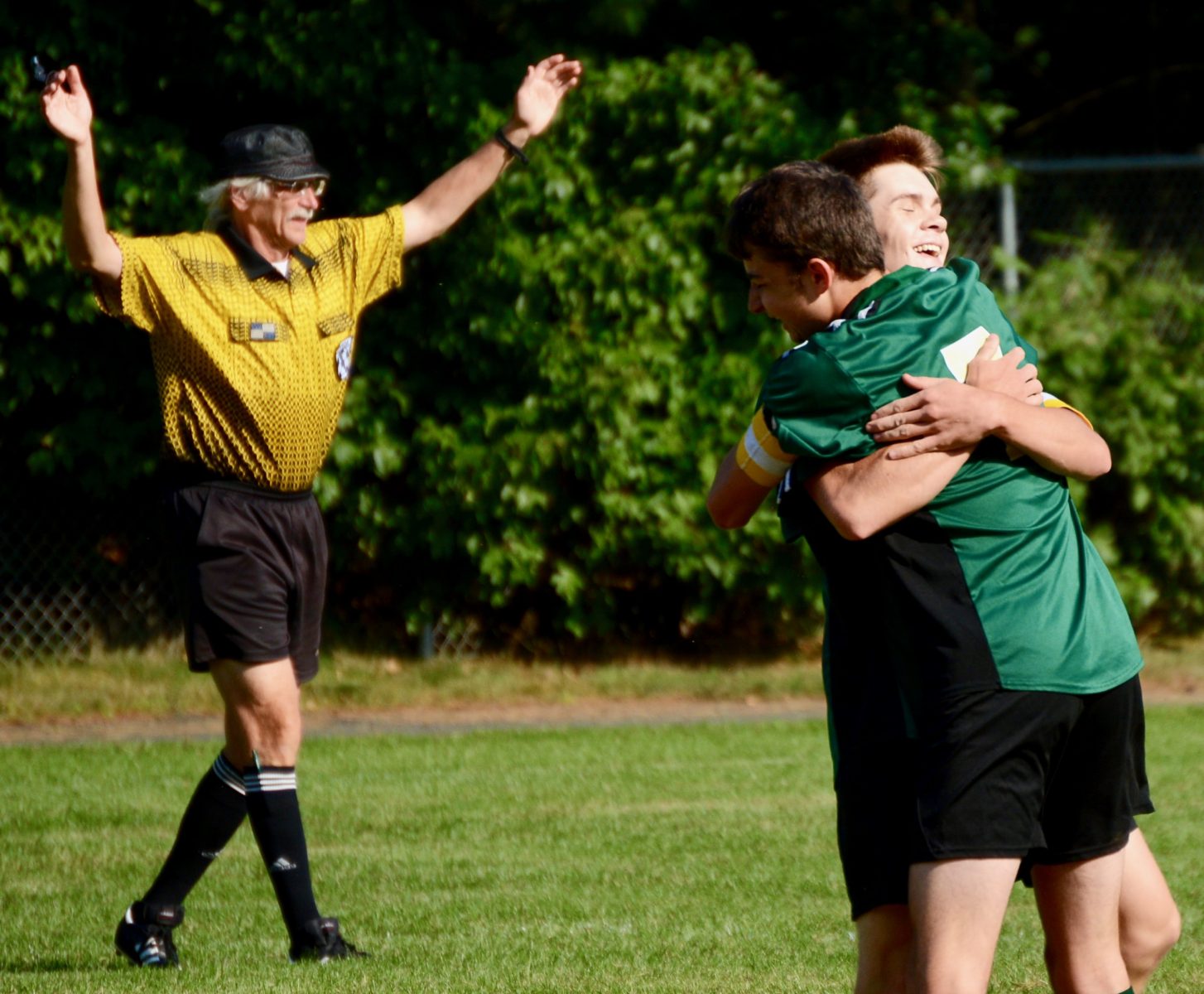 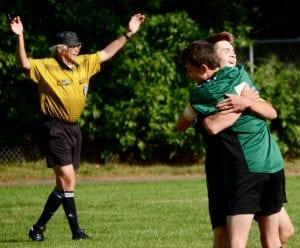 St. Mary’s Jack Lamirande is all smiles after recording the 100th point of his high school career Monday against visiting Mohawk. (Photo by Chris Putz)

WESTFIELD – St. Mary’s Jack Lamirande took a through ball from Everett Stec in the eighth minute of a boys soccer game against Mohawk Monday at Westfield Intermediate School, split the defense and scored the 100th career point of his high school career.
The game was briefly stopped as family, friends, teammates, coaches and fans applauded Lamirande’s feat.
“It means a lot to me personally, said Lamirande, noting that he reached this accomplishment with his brother, Billy, in mind. Lamirande said Billy, a former Saints player, was hampered by injuries during his high school career.
At that time in the game, the goal cut Mohawk’s lead in half.
“Down 2-0, mentally in my head I knew it was the time to get it out there and just go for it,” Lamirande said. “I was thinking right in my head that I need to put this left corner. Right there I just did it.”
It would be the closest Lamirande and his teammates would get to Mohawk though. The Warriors went on to score four more first half goals en route to a 9-5 victory; the St. Mary Saints had just one (Brady Collins from Lamirande). 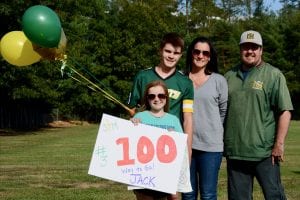 St. Mary’s put forth an even stronger effort in the second half with both teams exchanging three goals. Lamirande had all three. He was assisted by (Collins and Everett Stec). The third Saints’ score of the half was unassisted.
“It was tough coming into the game because we had no knowledge of what this team was like,” Lamirande said of the opposition. “We took it too easy.”
Still, there is a lot of time left to turn things around. It is just the second week of the regular season.
“Our team personally wants to make playoffs,” Lamirande said. “It’s one of our biggest goals right now. I want to get my teammates involved and get my other striker at least 30 points this season.”

East Longmeadow 4, Westfield 0
East Longmeadow scored two goals in each half en route to a road shutout at Westfield High, halting the Bombers’ run at two straight wins.
“The players executed our game plan … but it just didn’t work,” Westfield boys soccer Andrew Joseph said.
It was a stark contrast from Friday when Westfield shut out Palmer 2-0. In that game, Jack Keeney and Shea Drugan scored one goal apiece, their first varsity goals. Nichita Solopa and Mike Grochowski assisted. Bombers’ goalie Aiden VanOostveen (2 saves) recorded a shutout.
After the first three games of the season, Westfield’s record now stands at 1-1-1.

GIRLS SOCCER
St. Mary 5, Duggan Academy 0
Allie Goodreau recorded a hat trick, Emma Goodreau had three points (2 goals, 1 assist) and St. Mary’s goalie Amelia Willenborg (7 saves) notched a shutout in one of the Saints most thoroughly convincing victories in recent memory.
“In my four years of coaching the Lady Saints, as an assistant or head coach, I have never really seen us dominate a top opponent more than we did today,” St. Mary’s girls soccer head coach Patrick Olearcek said.
Erin Olearcek and Chloe Lussier also got in on the act with one assist apiece.
“From the very start of the game we were focused on controlling the play, marking their top players and creating a plethora of scoring chances,” coach Olearcek said. “Every one of the 17 girls who played today contributed.”
St. Mary’s put forth a tremendous defensive effort with stellar play from Macy Woodger, Lussier, Olearcek, Audrey Burke, Paighton Ramos, Jess Crosby, and Caroline Leahy.

Southwick 20.5, Chicopee 3.5
Matthew Garrity shot a match-best 38, and Southwick (2-1) trounced Chicopee Edgewood Golf Course to improve to 1-1.
Jesse Johnson finished with a 45 for Southwick. Rams’ Ben Cleland and Cameron Collins each had a 46.