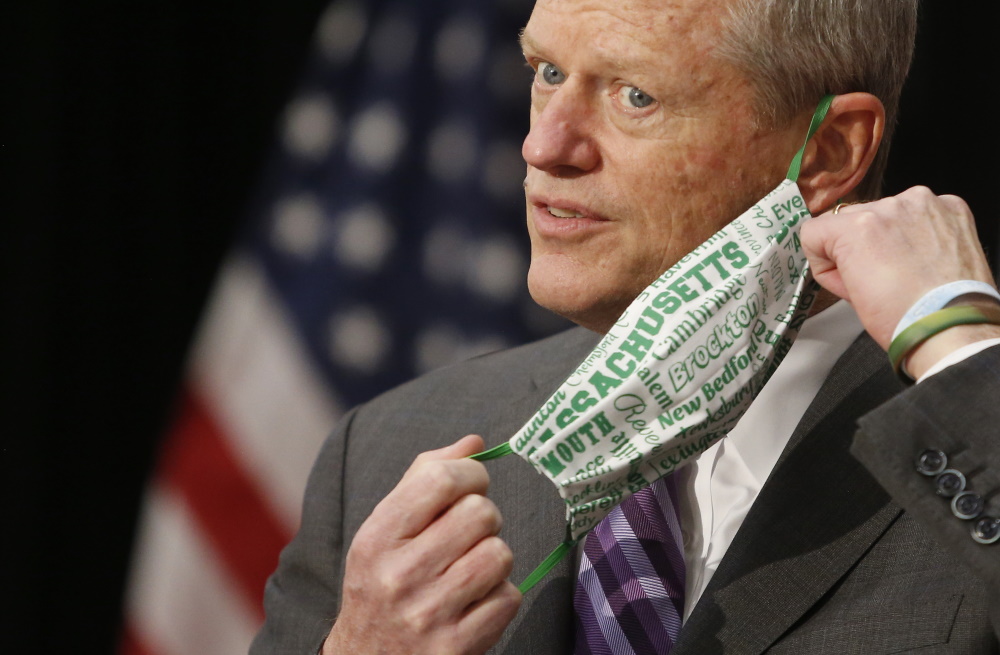 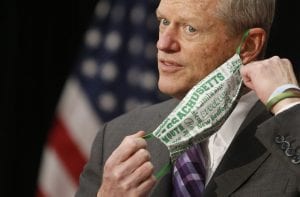 Massachusetts Gov. Charlie Baker removes his mask as he steps to the microphone during a Road Safety Legislation Announcement at the State House. (Jessica Rinaldi/Globe Staff)

Baker said that all industry restrictions will be lifted, capacity will increase to 100 percent across industries and gathering limits will be rescinded Aug. 1.

Westfield Mayor Donald F. Humason Jr. said Tuesday afternoon that he did not have a chance to review the new guidelines in-depth because he was meeting with Lt. Gov. Karyn Polito during the Massachusetts Municipal Association mayor’s meeting. He did say that he expected mixed reaction from residents.

“Changes are happening, not necessarily as fast as some would like, and too fast for others,” Humason said.

No matter what, Humason said he would review and refer to the guidelines leading up to the full opening in August.

Baker made the announcement the day after the Commonwealth’s lowest single-day COVID-19 positive totals – 812 – since November, and the same week that all state residents age 16 and over are eligible for COVID-19 vaccinations. The current seven-day positive test rate is below 2 percent.

“Depending on vaccine distribution and public health data, the Administration may consider re-evaluating the August 1st date,” Baker’s office said in a press release. “The Department of Public Health will also continue to issue guidance as needed, including guidance to still require masks indoors.”

The new relaxed guidelines begin Friday when face coverings will be required outside in public only when it’s not possible to socially distance. Masks will still be required at indoor public spaces and at both indoor and outdoor events.

“The light at the end of the tunnel, thanks to the hard work of so many, is getting closer, and we can start to look ahead with real optimism for the path forward,” Baker said.

The next relaxed guideline will be May 10 when large venues can increase capacity from 12 to 25 percent. Amusement and theme parks that give safety plans to the Department of Public Health can open at 50 percent capacity. Singing indoors and road races will be allowed with precautions.

Gathering limits will increase May 29 to 200 people indoors and 250 outdoors. Bars, wineries and distilleries will reopen at half-capacity under the same restrictions as restaurants, and street festivals, parades and agricultural festivals will be allowed at half-capacity.

Baker said an update to the restaurant guidance that day will allow for an increase in maximum party size from six to 10 and eliminate the requirement that food be served with alcohol.

“We hope that with more vaccines and a continued success in stopping COVID we can take this step earlier, but it will depend on everyone continuing to get vaccinated and doing the right things,” Baker said.

According to State House News Service, Baker did not lay out a timeline for when he might rescind the COVID-19 state of emergency he declared on March 10, 2020. He said Tuesday that is “one of the things that we will continue to review based on” public health data.

Similarly, he said any future decision about changing indoor mask requirements would be “a function of both the public health and vaccination rates and the ongoing research that is continually occurring.”

“We believe the vast majority of the rules that are in place with respect to masks indoors have had a lot to do with helping us manage case counts and hospitalizations, and they’ve been a good thing,” Baker said.