WESTFIELD-What does the metal band Killswitch Engage, composer and virtuoso pianist Frederic Rzewski, and the late Helena Maria Prioretta/Helene Criscio of Helene’s Accordion Studio all have in common?

All of these musicians are part of an ongoing Music in Westfield display now on view at the Westfield Athenaeum – across from the Jasper Rand Art Museum. 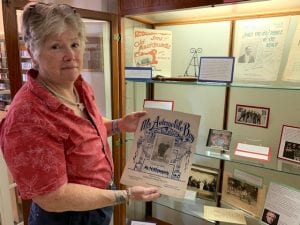 “The Westfield Athenaeum is currently gathering information and items for an exhibition,” said Kate Deviny, archivist and acting director. “If you were part of a band or have any connections with some musical history in Westfield, please let us know.”

Deviny, who has served as the Athenaeum’s archivist for 10 years, notes her role centers on capturing the city’s history and preserving it.

The idea for the music exhibition came to light after the recent display of manufacturing businesses that was highlighted in conjunction with the city’s 350th birthday celebration.

“People who viewed the manufacturing exhibition were surprised at how many industries we had in the city,” said Deviny. “After that feedback, I thought about other areas we could feature.”

Deviny has set her sights on 2020 for a major exhibition in the Jasper Rand Art Museum on Westfield music makers, complemented by a host of concerts and talks.

“We want to keep Westfield’s history so we hope the public is willing to either donate or loan materials and documents that will showcase the talented people who have (or had) a connection to Westfield.”

Materials that are sought are varied, from original photos, music sheets, albums, 45’s, 78’s, and CD’s, to a concert ticket, original poster or T-shirt.

Currently on view in two locked glass cabinets are original items dating back more than a century. Some of Deviny’s favorite pieces include sheet music from Ben Chadwick of the Chadwick Music Publishing Co., based in Westfield, in 1897. In his bio, Chadwick was born in Oldham, England, and moved to Westfield when he was 17. He was appointed as a member of the police force in 1891. While serving as a police officer, he composed “She’s the Only Pebble on the Beach,” which was his first song.  He led minstrel shows, was a dance promoter, and gave concerts. The Athenaeum has 16 of the songs he composed, including “Old Sons of Massachusetts,” the college song of the Massachusetts Agricultural College, now the University of Massachusetts.

Other highlights of the display include a CD from the band Killswitch Engage, which formed in 1999 after the disbanding of Overcast and Aftershock. The band has released seven studio albums and two live performance albums. Their eighth studio album, Atonement, is set for release next month.

Another unique grouping of materials includes sheet music, an album and original photos on Helene Criscio, who was the owner of Helene’s Accordion Studio in Westfield for 55 years. Criscio, who also was a music teacher and composer, published her first composition at age 15. Criscio and her husband Angelo were known as the Venetian Duo who played background music for the silent pictures at the former Strand Theater in Westfield. She was also “famous” for teaching students at Westfield High School how to play the accordion. 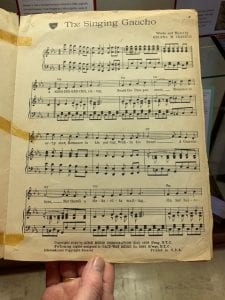 Frederic Rzewski, a Westfield native, also is featured in the current display, with a bio noting his major compositions often incorporate social and political themes. He co-founded Musica Elettronica Viva with Alvin Curran and Richard Teitelbaum, which became known for its pioneering work in live electronics and improvisation. Currently, he is professor of composition at the Conservatoire Royal de Musique in Liege, Belgium.

Deviny said she is hopeful that people will want to share their materials which will showcase how Westfield residents have contributed to the music industry over the years.

“We know how valuable materials can be to people,” said Deviny, adding, “so we also welcome items on loan.”