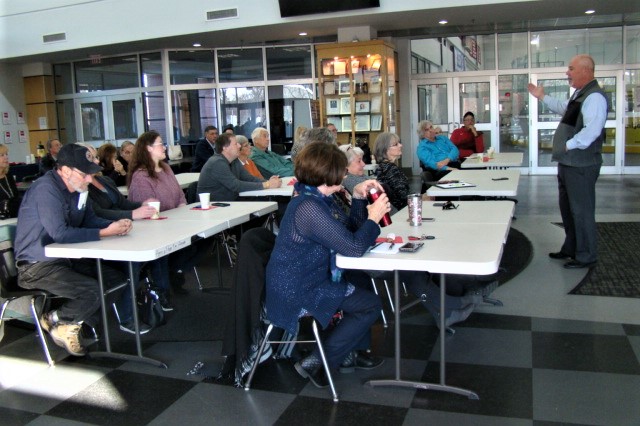 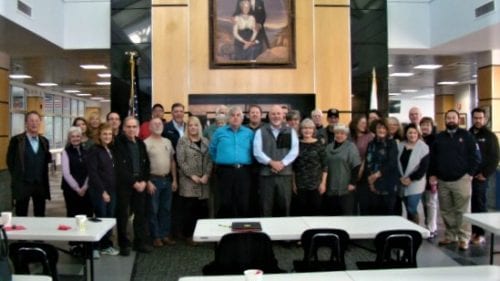 WESTFIELD – Mayor Brian P. Sullivan attended his final Greater Westfield Chamber of Commerce-sponsored Mayor’s Coffee Hour at Amelia Park Skating Rink on Nov. 4. He called it his “swan song,” and thanked the local business representatives for joining him, as they had every month.
Sullivan encouraged them to continue the tradition with the new mayor. He said it had been helpful to him, because he took messages and ideas he heard directly from them to his department heads. “You hear from residents a lot, but not usually businesses, until after something happens,” he said.
Even though it was his last one, the questions didn’t stop, and covered the gamut from Western Avenue, to the lights on Route 20, the Turnpike exit, and to the land clearing on East Mountain Road. He was also asked what the biggest need is for the city moving forward. 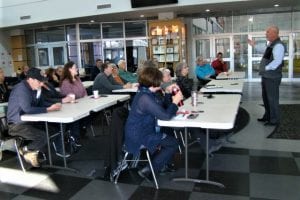 As for Western Avenue, Sullivan said as bad as it looks now, “it is actually a good thing.”
He said City Engineer Mark Cressotti and members of the administration met with MassDOT, and asked them to “button it up” for the winter. That meeting led to them doing additional work digging up the road from Lloyd’s Hill to the second Stanley Park entrance that wasn’t scheduled to be done until spring. The problems came with the heavy rain right after they dug up the roads, which created pools. However, he said the roads will be in better shape for winter, and ready for a top coat in the spring.
“Have patience through November; then they’ll be back in the spring to finish,” Sullivan said, adding that the city will winterize other areas that MassDOT won’t be doing more on this season, such as at the college entrance.
The Mayor also announced that before the winter, the city plans to mill and overlay Root Road and Sackett Road.
The new traffic light on Route 20 in front of Shortstop is another state project that should be ready to go depending on the season lasting. Sullivan said the traffic light at Springdale Road, a city project, is done for the season, after widening Paper Mill and Springdale Roads.
Talking about new business coming into town, Sullivan said the new lights on East Main Street will help bring in more business. Coming in already are Planet Fitness, a new Big Y gas station, Delaney House’s Meals to Go. He said the trampoline business is still planning to open, but was having some difficulties; and a new restaurant is looking at the space next door.
Sullivan said the city received a couple of quotes back from the Urban Renewal Project. He said the new Bentley’s Billiards owner is looking at mixed-use, with a restaurant on the bottom, but he hasn’t heard anything about plans for the Bank of America building, also sold to a private owner.
Sullivan also talked about Myer’s Info Systems opening up, and recommended that business owners take the time to tour the building, which he called “built for millennials, with stand-up offices and lounge chairs.”
Asked about the progress on James Hardie Building Supply, Sullivan said they have all their permitting, but are waiting to get the train track spur.
Sullivan said the city still thinks a potential additional ramp going east bound only onto the turnpike would alleviate some eastbound traffic, and is still on the table, but MassDOT is in charge of that area as it is all state highway. He said they are looking at how to get eastbound traffic to utilize both lanes onto the existing ramp, including better signage.
Sullivan said the city has tried to time the lights around the turnpike exits, but it is still “a work in progress.”
Regarding the problems on East Mountain Road, Sullivan said the cease and desist orders were issued, and the city is going through the legal process now. He said the state agencies are not happy about the environmental impact. “It’s not a good situation,” Sullivan said, adding, “We weren’t against the (hemp) farm itself, that’s not the issue.” He said the hemp farm fits the zoning, but “to destroy what was there to get to your end product, doesn’t make it right.”
Sullivan said the Columbia Greenway project is all paid for, and work will begin in the spring, and last about a year and a half. 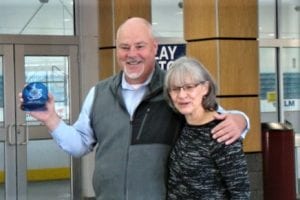 Responding to the question of what is the biggest need in the city moving forward, Sullivan said he is loyal to the School Department, and the elementary school project needs to be done. Once that has been accepted and begun, the city can move on to an addition for the high school that could potentially bring the Technical Academy to that location. He said a school for aviation is another possibility. They had 100 applicants for 14 slots this fall.
Chamber Executive Director Kate Phelon then presented Sullivan with a gift, thanking him for his service.
“I actually look forward to these. You ask some great questions, and I’d rather you hear from me directly,” he said, adding that he told all of the candidates that they should be careful of him now. “Next year, I’ll be a constituent,” Sullivan said.