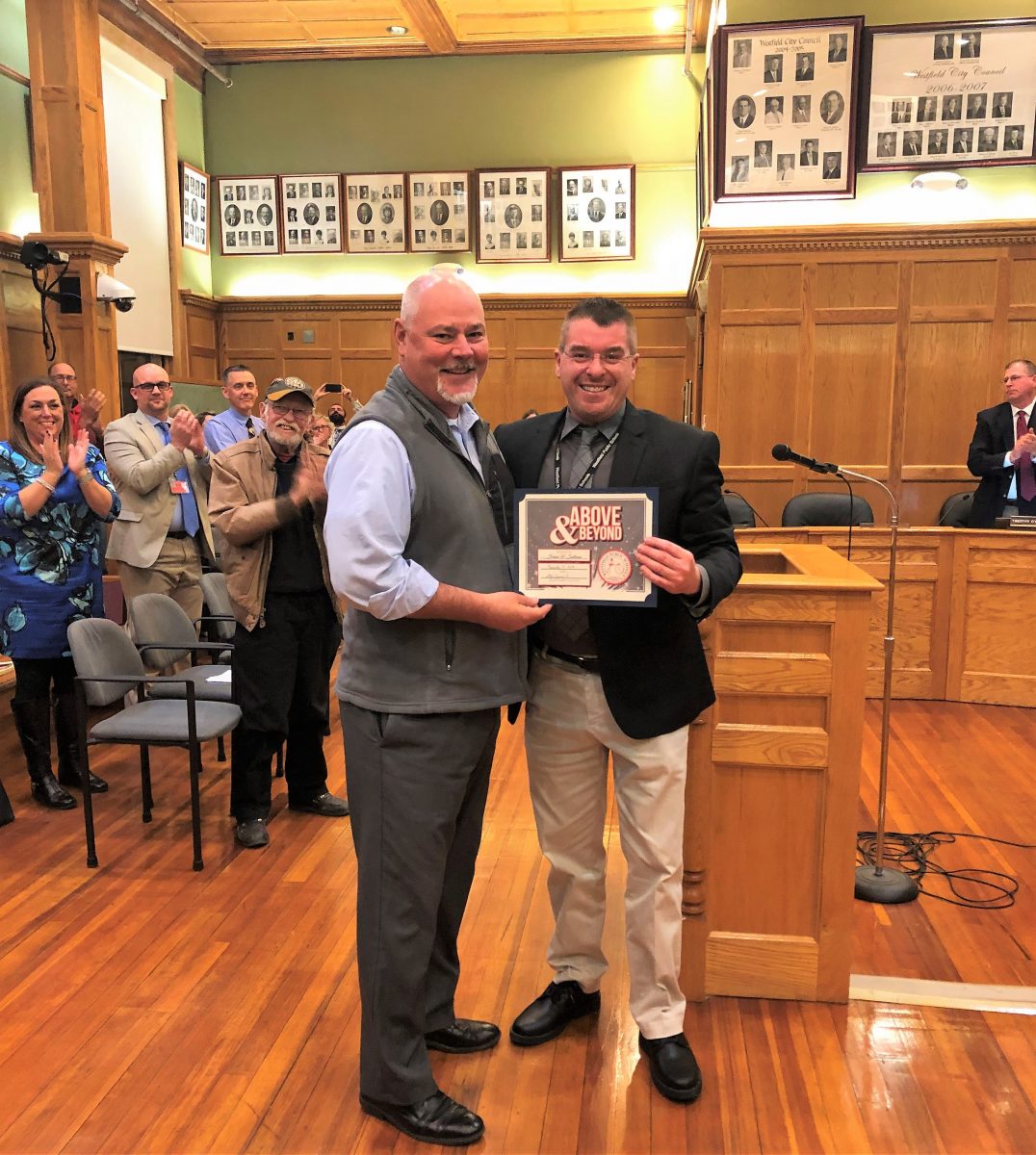 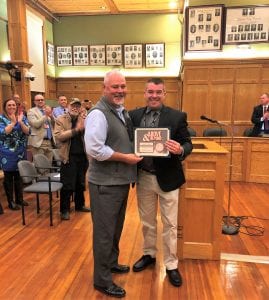 Superintendent Stefan Czaporowski presents Mayor Brian P. Sullivan with an “above and beyond” certificate at his final School Committee meeting Nov. 4. (Photo submitted)

WESTFIELD – Westfield Public Schools Superintendent Stefan Czaporowski presented an “Above and Beyond” certificate and the gift of a clock to Mayor Brian P. Sullivan during his last School Committee meeting as chair on Monday.
The superintendent and each member in turn took a few minutes to tell Sullivan what his service has meant to the committee and the schools.
Czaporowski cited Sullivan’s student-centered approach to education and his constant presence at school functions, including pulling an airplane through downtown for the opening of the Westfield Technical Academy aviation program, and most recently high-fiving elementary school kids on their way in to school in the morning.
“I will miss 4 a.m. texts when we pretend calling school is up to us, when we both know it’s up to Pam (Kotarski, transportation director),” Czaporowski said, adding, “The students have been fortunate to have tonight’s recipient as chair of the School Committee.”
Vice-chair Ramon Diaz, Jr. said he appreciated all the work that Sullivan has done for the students and for them, “not just on the committee, but for us personally.”
School Committee member Cindy Sullivan, no relation, pointed out that before Brian Sullivan became mayor, he was president of the City Council, and he always advocated for the schools. “Thank you so much for all you’ve done,” she said.
Diane Mayhew said the mayor has been dependable, supportive, encouraging, and his decision-making skills have been an asset. She said it has been an honor to work with him.
Timothy O’Connor said he made the body a better group of people with his leadership, and never took credit for it.
The Mayor’s brother, Bo Sullivan, said he had always followed the legacy of his brothers and sister in school. “Always that goal to get to; it wasn’t easy following the four of them, especially Brian’s 18 years on the City Council, and four years as Mayor.”
Bo Sullivan said he had only been there a year, and there is only one reasons that he is there. He said his brother Kevin is looking down saying, “I miss these members, I miss my friends, but job well done, Brian.”

Bo Sullivan was appointed to take the place of his brother Kevin Sullivan, who passed away unexpectedly a year ago in September.
“It’s all about the kids, don’t lose that,” said Brian Sullivan, adding that there’s no better way to start the day than to meet the kids at the bus and high five them as they walk in.
He also said he wants to see the new elementary school come in, and hopes to get on a building committee to help. “Thank you from the bottom of my heart,” the mayor said.