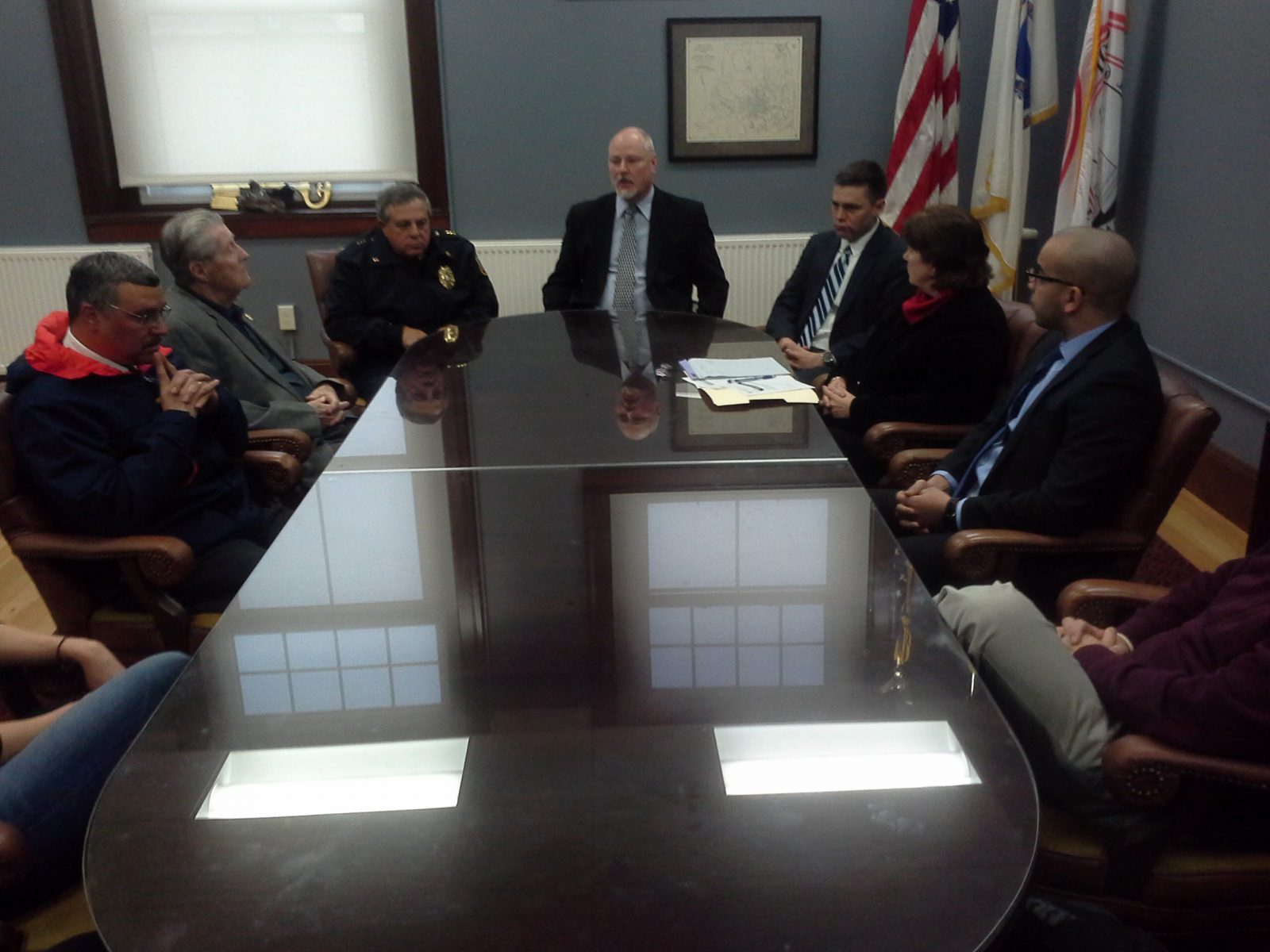 WESTFIELD – Mayor Brian P. Sullivan convened a summit Wednesday afternoon about the spike of heroin and opioid deaths in the past week, including the death of a 16-year-old high school girl.
Sullivan invited law enforcement, first responders, school and state officials, and educators to his City Hall office to strategize about the ongoing opioid epidemic, which continues to devastate communities across the Pioneer Valley and around the nation.
Fire and medical crews treated at least a dozen known overdose victims in the past week alone. Three of the overdoses were fatal.
“Westfield has been hit rather hard in the last week or so,” said Sullivan, who was joined by Police Chief John Camerota, State Rep. John Velis (D-Westfield,) School Superintendent Dr. Suzanne Scallion, fire department officials and police commission members.
He called the 12 overdoses a “soft number” as not all overdoses are reported to authorities or health officials.
“We have a problem here and I wanted the community to know that the decision-makers and the people responding to this are all talking with each other and on the same page,” he said. “And finding ways to combat the problem, address the problem.”
Sullivan called for more open communication about the escalating epidemic.
“We have people in the room who are leaders in the community in regards to this,” he said. “To get a group together like this should show people that we understand the problem.”
Scallion said “prevention is our greatest defense” to combat the epidemic.
“What we have in our mayor and chief of police is a team approach, that this is a community problem and we’re going to have to find a solution as a community,” she said. “We are all stunned and saddened by the loss of a 16-year-old, but this is happening all over the Commonwealth, it is happening all across the country. We’re not going to put our heads in the sand. We’re going to use this as a rallying point and we’re going to look at every possible scenario that we can.”
The Westfield School Department’s website now includes links to the Anonymous Alert System and a link educating the community about the signs and symptoms of opioid abuse, including prescription and illegal drugs.
The alert system has garnered over 100 alerts from parents and students who are concerned about a loved one or classmate.
“We ask that parents take a look at it not only for their own child but for friends of their children,” said Scallion.
Past alerts informed school officials about bullying incidents or suspected substance abuse.
Scallion said the school department will conduct an “information blitz.”
A series of forums will be held on the subject of drug abuse and the impact it has on the community.
Velis said treatment facilities in western Mass., including Providence Behavioral Health in Holyoke, lack beds to treat the growing number of addicts. Gov. Charlie Baker recently signed legislation that increases funding for in-patient treatment.
While communities tackle the prevention aspect, more must be done in treating addiction, Velis said.
In a recent conversation with administrators at Providence Behavioral, Velis said hundreds of people seek in-patient treatment at the facility but are turned away.