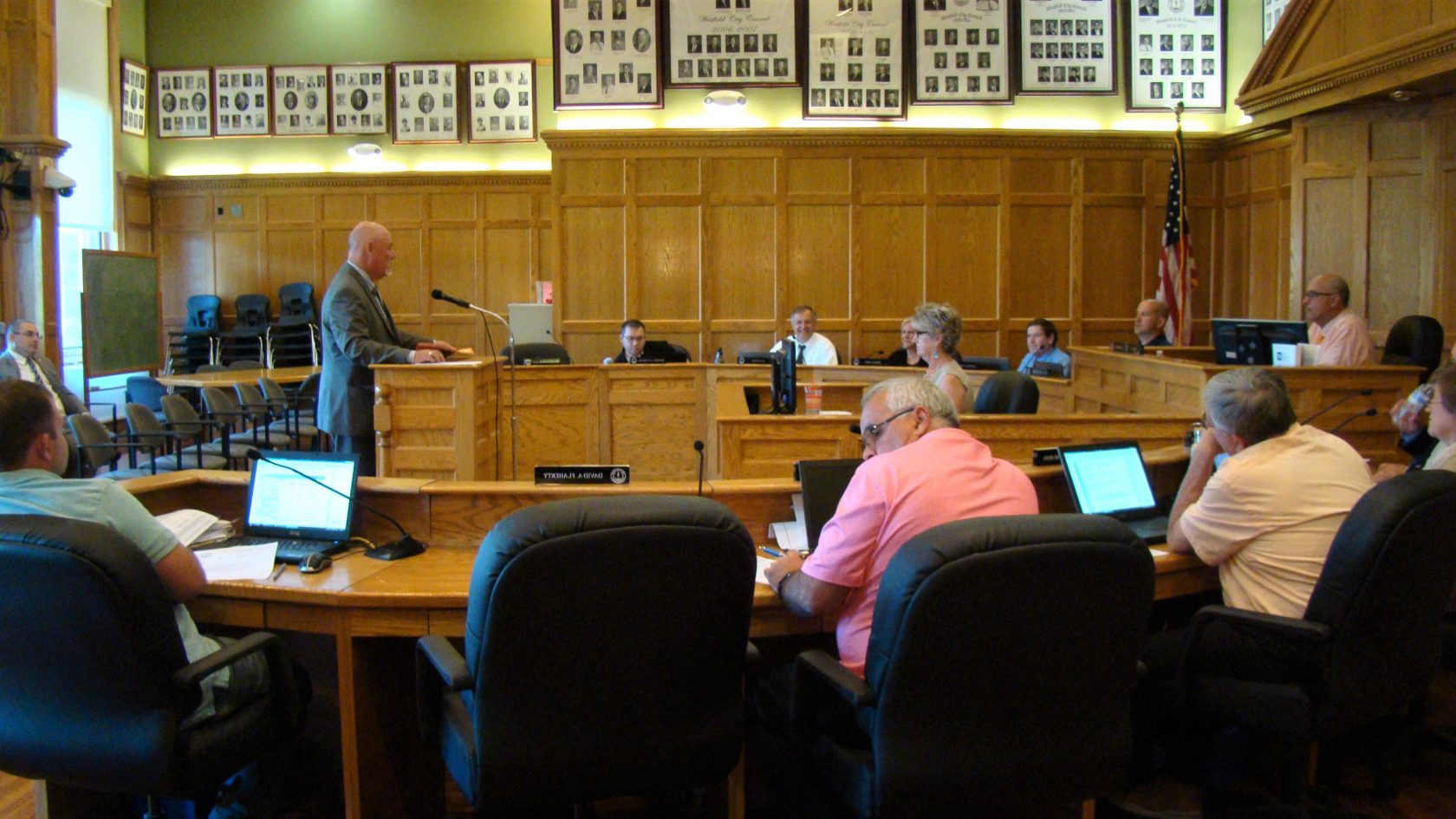 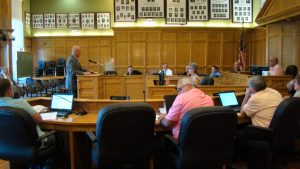 Mayor Brian P. Sullivan presents the city budget to the City Council at a special meeting on Wednesday. (Photo by Amy Porter)

WESTFIELD – Mayor Brian P. Sullivan, in presenting the city’s budget at a Special City Council meeting on Wednesday, gave an overview of the process to the councilors without getting into a lot of detail. The city’s budget request, minus the schools, totals $69,158,252.
“This is my fourth consecutive year of presenting a balanced budget,” he said, adding that this year he is working with a new finance team in City Auditor Christopher Caputo and Treasurer Matthew Barnes. He said the process involved a lot of fact finding and questions and answers.
Sullivan said in the process of building the budget, he met individually with department heads and asked for level funded budgets from them. He said it was difficult with contract negotiations going on. Four unions have been ratified, with five more on the city-side, plus all of the school unions left to go, which he said is one reason that the budget was delayed.
He also said that he would be available to attend any Finance committee review meetings that make sense.
Sullivan added that on the agenda at the meeting are requests for allocations to the health insurance premium account for employees. He said last year, they cut $1 million out of the account after several good years, but now they are putting it back in.

“We’ve had good years. This year, not so much,” he said, adding that there have been a couple of large health insurance claims recently.
“The auditor brought it to our attention that some of the employees leaving weren’t on insurance, while new employees coming in are getting insurance,” Sullivan said. But, he added that last year the $1 million that was cut was in taxable money, while the requests, which were referred to the Finance Committee, are from swept accounts and Free Cash.
Going back to the budget sheet, Sullivan said it showed where the city started with requests from departments, and what he cut. He said the departments are below last year’s budget, with the exception of the Department of Public Works and Engineering. The sheet showed a total of $320,280 in cuts by the Mayor to the department requests.
The schools did not need any additional funding from the city, even though they are up 3.1%, due to additional funds coming from the state, Sullivan said. He said the additional funds will be spent on state priorities, such as reducing classroom size and special education, as well as priority items for what he called “the superintendent’s vision.”
“A year where the school district doesn’t ask for an increase from the city side is impressive,” Sullivan said.
Sullivan said he also added $150,000 on the expense side to cover possible union contract increases.
Additionally, he pointed to the city’s Bond AA+ rating, which he said “basically means they agree with us that we’re in good shape.” He said there is just under $800,000 in the Other Post Employees Benefit (OPEB) account, $700,000 more than when he started as Mayor.
Sullivan said some of the cuts he made were simple, such as purchase of services accounts and in-state travel, especially when the line item hadn’t been used in three years.
He said big cuts included items that the DPW wanted that will have to wait, including a wash rack for trucks, and a fire suppression system in the DPW garage, which doesn’t have one. In the next round of Free Cash spending, he said he would suggest that for one-time use.
He said he also cut requests for two pickup trucks and a log truck from the DPW. “There are some vehicles in the budget. We bought the excavator, now we need a trailer around it,” he said, because they are doing more work in-house.
Sullivan said he would let DPW Director David Billips explain the plan for trash trucks regarding rentals versus leases versus outright buys.
He said they also cut a couple of requests from Engineering, which they physically won’t get to this year.
Sullivan said he also cut a total of three police vehicles, but with the Council’s support, recently purchased two of them with swept accounts. “The wanted six; they’ll have five,” he said.
He said there is a big number in the Internet Technology account in the budget, which reflects the cost of putting in Whip City Fiber. However, he said that cost will be paid for from the PEG account.
The Mayor said he did not send the cut sheet that showed where the last round of cuts came from, which he said are mostly from one-time purchases, or in-state travel. Finance committee chair Brent B. Bean, II suggested that he send it in with the budget. Bean said the Finance committee reviews will begin next week.