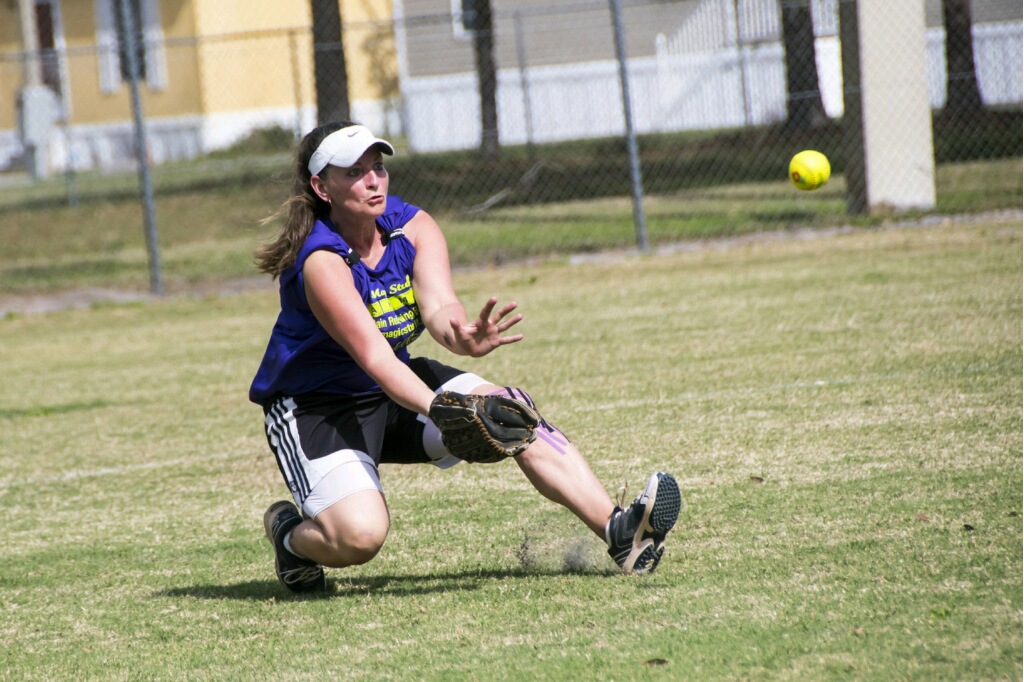 WESTFIELD-Softball has been a lifelong passion for Westfield native Donna McLean – and her dedication to the sport will be recognized when she is inducted into the Connecticut ASA Hall of Fame later this year.
“I was very honored when I received the call,” said McLean during a recent phone interview from her home in Connecticut. 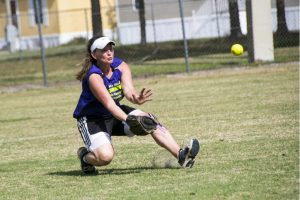 Former Westfield resident Donna McLean catches a ball during the recent Senior Softball – USA 12th Annual Tournament of Champions in Florida. She will be inducted into the Connecticut ASA Hall of Fame this fall.  (Submitted photo).

McLean was nominated by John Stratton, field manager for the Brakettes of Stratford, Conn., for her years on the women’s major fast pitch team.
“Donna had a fantastic record with the Brakettes and played for the team for years,” said Stratton, adding she knocked in the winning run to win the national title in 2004.
For fast pitch nominees like McLean, any individual who had an outstanding softball career in Connecticut is eligible, with an emphasis on state, regional and national tournament play as one of the important criteria for Connecticut Amateur Softball Association Hall of Fame consideration. McLean will be inducted along with several other state residents in the areas of fast pitch play, as well as umpires, coaches and sponsors.
“The Brakettes are the finest and most recognized team in women’s softball,” said McLean, who played for the team during the 1987-89 and 1996-2005 summer seasons. “I am proud of the many years of dedicated play I had with the Brakettes which has come full circle in a very special way.”
The induction ceremony is slated Oct. 20 at the Costa Azzurra restaurant in Milford, Conn. A reception is scheduled from 4 to 5 p.m. to meet the inductees, followed by dinner and the induction program. For details, visit www.connecticutasa.com.
Her love of the game over a span of 43 years remains constant – especially in light of her recent return from the Senior Softball – USA 12th Annual Tournament of Champions in Lakeland, Fl. from Feb. 9-11— the team she plays on – the Twisted Fossils/Magic Stuff – placed second in the 50’s Division. The competition is billed as “the only tournament in the sport pitting the best of the best on the softball diamond.”
The Twisted Fossils/Magic Stuff, based in Massachusetts, has players across the state as well as from Connecticut and New York. McLean noted that the team was invited to play in the Tournament of Champions because they won the 50’s Division last summer at the Senior Softball – USA Rock ’n Reno (Nevada) Tournament.
“It still feels the same playing softball from Little League to now but at an older age,” said McLean.
McLean’s story begins in 1975 when she made history in Westfield for being the first girl to play baseball in Westfield’s Little League. She played left field for the Moose Club for four years and was named to the Little League’s All-Star Team during her second year of play.
Then, fast forward to Westfield High School where McLean made varsity softball playing center field during her freshman year. During her sophomore year, she learned how to pitch and was one of the team’s pitchers for her sophomore, junior and senior years. During her high school career, McLean received three MVP awards for softball and two MVP awards for basketball.
While at Westfield State, she played center field during her freshman year and came in for relief pitching. For her last three years, she pitched. She was named an All-American and All New England softball player from 1984-87. Also, McLean was a four-time all-conference and All New England selection, and led the Owls to an NCAA Tournament berth in 1985 and the 1987 ECAC championship. She was inducted into Westfield State’s Athletics Hall of Fame in 2005.
After college, she joined the Brakettes and played in the outfield. During her time with the team, the Brakettes won four national titles in 1988, 2002, 2003 and 2004.
While McLean “retired” from the Brakettes in 2005, she has since played on numerous women’s softball teams over the years – including the last few years with the Twisted Fossils/Magic Stuff.
“I love the game of softball,” said McLean, adding that “love” extends to her teammates and the fans who are part of her extended family.
McLean, who has her own business, Donna’s Critter Sitter Pet Service, LLC, in the Litchfield County region, is now gearing up for the Twisted Fossils/Magic Stuff summer season since that means more time – playing left field – where she is most at home.
“I play softball to keep in shape, to meet new teammates and reconnect with old teammates,” said McLean, adding, “Softball keeps me feeling young.”
Young at heart is how you can describe McLean who has no plans to retire from the sport any time soon.
“I will continue to play until I can no longer throw, bat or play the outfield,” she said.
McLean’s message to young girls who are passionate about any sport is simply to “work, practice, play hard and follow your dreams. Your dreams will come true.”