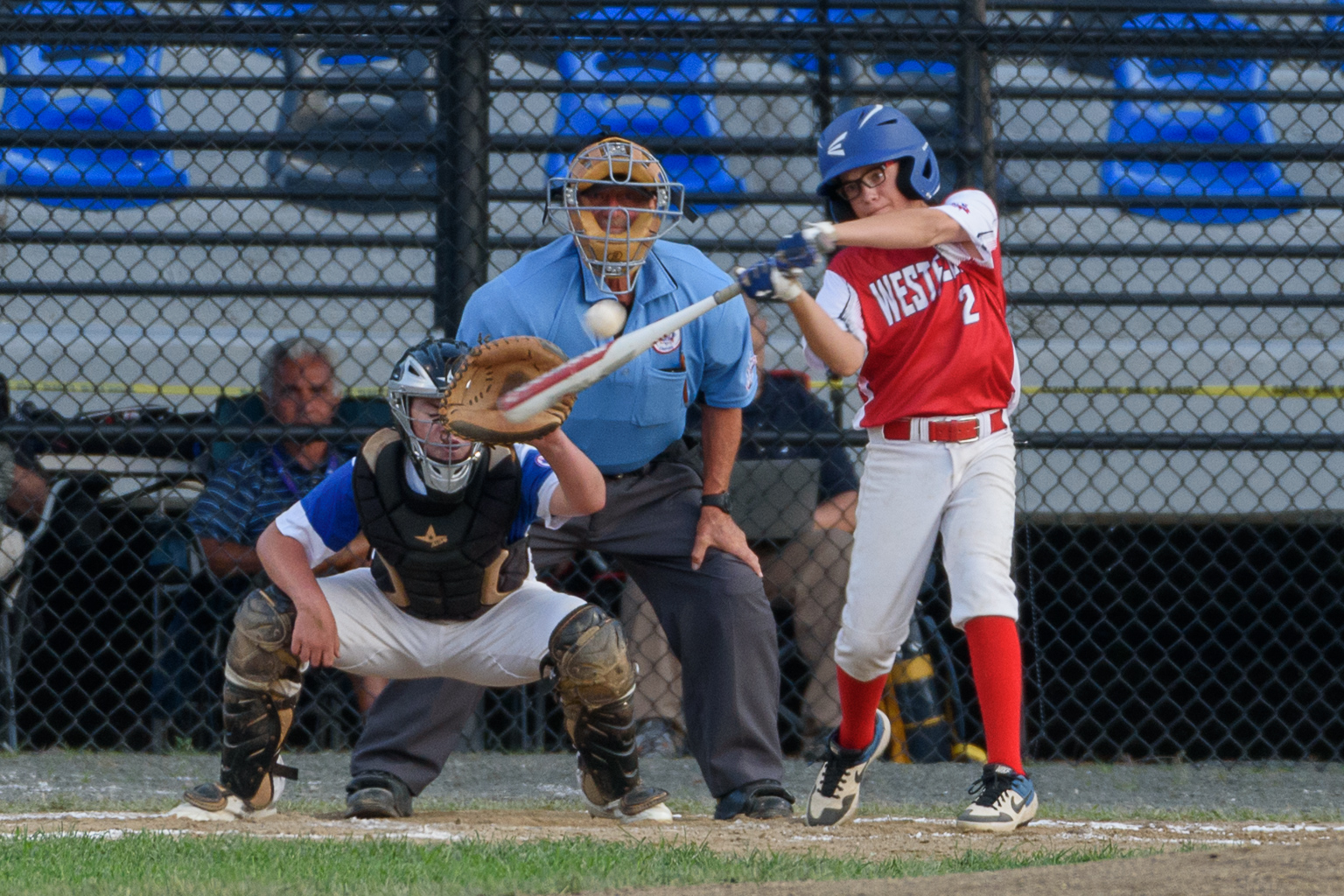 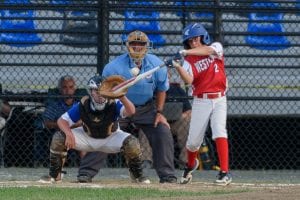 WESTFIELD – It is apparent that Meridian, Mississippi boasts as many talented 13-year-old sluggers as the letter S’s and I’s in their state name.
Meridian won their second game in as many days, building a seven-run lead against Westfield with some big hits en route to a 9-7 victory on Day 2 of the Babe Ruth Baseball 13-Year-Old World Series Friday night at Bullens Field.
Mitchell Butler led the way, going 3-for-3 with a double, two runs, two RBIs and a walk for Meridian.
Meridian came out slugging.
Lead-off batter Brett Busbea hit a booming double to left-center field for the Southwest champs. Fred Liddell walked. Butler followed with a towering double to left field, scoring one. Jake Shelby cracked a RBI single to center field, and stole second. In the next at-bat, Westfield turned a double play as the second baseman snared a quick-sinking hit and picked off the base-runner caught leading at second base. A wild pitch made it 3-0.
Westfield had a chance to put a dent in their deficit right from the get-go in the bottom half of the inning. Colby LaPoint and Nick Lenfest started off the first with back-to-back walks. Jacob Mello loaded the bases with a single to right field. Meridian pitcher Jake Shelby forced a fly out and a double play as the third baseman corralled a ball at third base, stepped on the bag, and fired to first base to complete the play.
Meridian kept at it. In the second inning, Busbea drove in a run with a hit to right field. A Butler line drive single up the middle made it 5-0.
Westfield got on the board in the bottom of the second, cutting into Meridian’s lead. Emmett Garfield walked. Patrick Moore singled up the middle. Zach Olsen followed with a run-scoring single to right field. Another run scored on a wild pitch.
The two teams exchanged one run apiece in the third. Meridian scored on an obstruction play to take a 6-2 lead. Westfield came back in the bottom half of the inning. LaPoint singled. Pinch-runner Dylan Gibson advanced to second base on a wild pitch and soon scored on an infield error to make it 6-3.
Meridian tacked on another run in the fifth on a Chance Guisgond RBI single. In the home half of the inning, Westfield managed to get two runners in scoring position with one out, but Mississippi reliever Demarrion Terrell came back to force a ground out and strikeout to end the threat.
Meridian increased its lead even further in the sixth with two more runs. The big hits in the inning included a double from Cannon Graham, and a RBI single from Braxton Cornish.
In the bottom of the sixth, Westfield struck back with a vengeance. Paul Lawry singled. With one out, Moore singled. Evan Grant drilled a ball down the third base line for a run-scoring base hit. A wild pitch resulted in another run. Heeter drove a ball up the middle for a RBI single. A balk made it 9-6. Consecutive walks from Andre Phaneuf and LaPoint loaded the bases. The home team hit into a 1-2-3 double play though to end the inning.
Westfield made things even more interesting in the seventh with singles from Mello and Lawry. A fielder’s choice made it 9-7, but reliever Mitchell Butler forced a ground out to end the game.
Westfield returns to action against Janesville (Wisconsin) Saturday night at Bullens Field at 7.
Saturday gets started with Fargo (ND)-Calgary (Alberta, Canada) at 10 a.m., followed by Spokane (Wash.)-Centre County (Penn.) at 1 p.m., and Pittsfield-Hawaii Kai at 4.
Notes: A pregame ceremony honoring Kevin Sullivan was held before the Westfield-Meridian game Friday night. Sullivan was a longtime school committee member, civic leader, as well as a former coach and player who passed away suddenly last year. Family members, city officials, and friends were on hand for the special tribute.

Ohio Valley (Janesville, WI) 8, Calgary, Alberta Canada 0
The first game of the day (game 5 of the tournament) started off with blue skies and a nice breeze to keep the temperature low for fans in attendance. The Janesville pitcher, Josh Knuth, was lights-out on the mound, throwing a complete game- giving up only four hits and striking out four, while allowing no runs across the plate. Tre Miller led the way offensively for Janesville, going 2-for-3 and knocking in two runs. Aiden Schenk was right behind him, also bringing in a run and hitting a booming double to right center field. Tyler Horkan brought in another run for Janesville, going 1-for-3 in the process. Lucas Labuguen was dominant at third base for Janesville, eating balls up left and right at the hot corner. For Calgary, Joshua Shanks took the lead on offense, going 2-for-3, with Jackson Trca and Herman Figueroa both going 1-for-3 as well. Combined, Canadian pitchers, Herman Figueroa, Quaid Powers, Aeden Wheeler-Mislang, and Brendan Churchill, only let up five hits for the Janesville offense. At the end of the game, one player from each team is selected as the Ron Tellefson “Player of the Game” based on skills and sportsmanship. For Calgary, the winner was Cody Florendine and for Janesville, Josh Knuth was chosen.

Pacific Northwest (Spokane, WA) 3, Southeast (Greenville, NC) 2
Another fantastic game in the 2019 13-year-old World Series at Bullens Field. Final score ended up 3-2 Washington over North Carolina, but both teams put up one heck of a fight and put on a great show for the fans in attendance and watching back home using the live simulcast. For the winning, Washington team, Nate Fitzpatrick pitched a great game — going six full innings only allowing one earned run, striking out three and giving up six hits. Offensively for Washington, Kole LeGrant, Tanner Smith, Xavier Hattenburg, Henry Sandberg, Drew Rayment, Nate Fitzpatrick, and Tucker Stocum all contributed with hits for a true team effort on offense. Fitzpatrick, Sandberg, and Stocum also contributed by knocking in the three Washington runs. Greenville showed true grit by staying in the game the entire time, rallying to score two runs in the top of the seventh. Aaron Holly started on the mound, followed by Cole Smith who through 2 1/3 innings, giving up no earned runs and striking out one. Caleb Overby, Davis Hathaway, JJ Myrick, Colin Woolard, Cole Smith and Alex Popovich all contributed with hits for the Greenville offense, with Myrick and Overby knocking in the two runs. Both teams showed what it meant to have a nail-biting game as Greenville was close to coming back multiple times throughout. At the end of the game, one player from each team is selected as the Ron Tellefson “Player of the Game” based on skills and sportsmanship. For Greenville, the winner was Jay Clemmons and for Washington, Nate Fitzpatrick was selected as the winner.

Pacific Southwest (Hawaii Kai, HI) 14, Mid Atlantic (Centre County, PA) 1
Game 7 of the 2019 World Series was an offensive showing from the Hawaii team. They combined for 11 hits, spread out between nine players. Taylin Oana led the way, going 3-for-4 and knocking in a RBI. Kapiko Are, Mana Lau Kong , Chandler Murray, and Nainoa de la Cruz each had two RBIs, with Jace Souza, Noah Paiva, and Ryden Dacosin each chipping in with a RBI. Offensively for Hawaii, it was a total team effort to combine for their 14 runs — long balls and line drives to maximize the number of runs. Nainoa de la Cruz pitched five strong innings on the mound, only letting up one earned run from the Pennsylvania offense. Pennsylvania played solid defense, but struggled to get the bat on the ball and get the ball where the quick Hawaii defense was not playing. They were limited to four hits but only struck out twice. At the end of the game, one player from each team is selected as the Ron Tellefson “Player of the Game” based on skills and sportsmanship. For Hawaii, the winner was Taylin Oana and for Pennsylvannia, Brayden Kormanic was selected as the winner. – Additional game reports courtesy of Annalise Eak