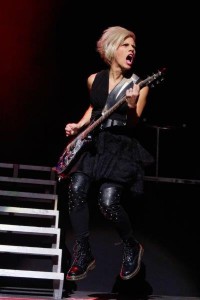 UNCASVILLE – A light version of the Rockstar Uproar festival made its way to the Mohegan Sun Arena this past Wednesday night. The Uproar Fest usually travels with ten or more bands, has multiple stages and is an all-day event. This show had four bands and lasted a couple of hours… but was worth every minute of it.
Show openers 3 Years Hollow were a late addition to the evening as two bands from Canada were unable to get their passports straightened out to make the show on time. What a lucky break for 3YH. Touring in support of their recent release, The Crack, 3YH played a 30-minute set of flat out rawk tunes. These guys are starting to get some steady radio play and look and sound like they belong playing some bigger stages… more to come on 3 Years Hollow. 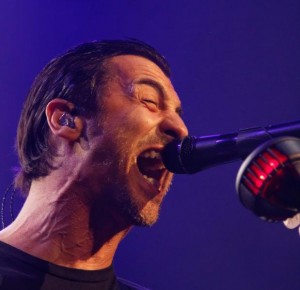 Hard rawkers Pop Evil took the stage next with a very explosive 35-minute set. Lead singer Leigh Kakaty had the crowd involved from start to finish with some catchy choruses and rawk star moves. Although the band has three releases, most of the material played was from their 2013 release, Onyx. Onyx charted as high as 39 on the Billboard top 200 and also saw the band have two number one songs hit the hard rawk charts. The band was solid on Sick Sense, Trenches and Deal With the Devil. They had the entire crowd singing along on their most recent hit, Torn to Pieces. I could easily see this band headlining arenas at some point. Another album with some big hits will make that happen.
Christian Rawkers Skillet had a huge fan base show up for this show. The band came out to a roar from the crowd and they didn’t let them down. Skillet has been around since 1996 but has just recently gained a large following by putting out successive releases with some big hits on them. Skillet was given the luxury of an hour-long set that included tunes from most of their releases and really focused on the last three. The band’s sound has definitely changed over time and with each release they seem to get a little edgier and harder with their songs. Whispers in the Dark, Sick of It, Awake and Alive, Rise and Comatose had the band sounding their best. They ended their set with the rawkers Monster and Rebirthing. This band is all about the fans. If you follow them on Facebook they will generally announce a time and place to meet with fans before or after the show.
Boston mega stars Godsmack headlined this show and are the headliner on the entire Uproar fest tour. As the headliner Godsmack had the biggest stage and the best sound of the night (except for the end… but I’ll get to that). Given the chance to headline this festival, Godsmack jumped at it, especially with the release of their latest, 1000hp. The band opened with Generation Day before moving right into their classic Cryin’ Like a Bitch. Locked and Loaded, Keep Away and The Enemy followed before Godsmack played a something off the new one. Lead singer Sully Erna encouraged the fans to continue banging into one another and to make the entire floor a mosh pit as his way of introducing the new tune Something Different. The first single off the new release, 1000hp, came next with a full pyrotechnic display throughout the song. The band played most of their hits like Straight Out of Line, Awake, Speak and Voodoo. The set actually ended on what is normally their second to last song of the night. As the band finished playing the song Whatever, singer Erna, in supposed disgust of the sound quality the band was getting, threw the mic stand down and walked off the stage. The band never came back to finish with what was supposed to be their encore, I Stand Alone.
From a fan’s standpoint, overall this was a very good show. All the bands tonight were great and seem to give their all. Godsmack disappointed a little with what seemed like an uninterested attitude in playing the Mohegan Sun arena, walking off the stage in disgust and not finishing out their set. I can’t say I heard anything really wrong with their sound, but clearly Sully Erna did and made a visual point of letting everyone know about it. I will definitely check out 3 Years Hollow, Pop Evil and Skillet when the opportunity arises in the future.
Mike Augusti’s Rawk Report provides live reviews of local concerts in Connecticut and Massachusetts. The Rawk Report also includes new music releases and upcoming concerts to the area. [email protected] for any questions or comments.