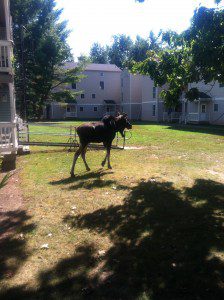 WESTFIELD – A moose drew crowds and led police and animal control officers on a chase on the north side of the city yesterday. The moose was first reported to police at 7:54 a.m. on Holyoke Road and was tracked by officers as it made its way over the bluff to Union Street where it drew so much interest in the Union Street area that officers took action to disperse the crowd to ensure nobody was hurt as it moved through the neighborhood. Police attempted to track the moose which was later reported to be in a gully at the end of Carpenter Avenue. At 3:15 p.m., a Carpenter Street resident reported that the moose was near her driveway and she was concerned for the safety of children returning home from school. Environmental police responded and Ken Frazer, the director of animal control operations, reports environmental police officials decided to dispatch the moose as there was no safe way to get it away from the residential area to the river. Frazer said that tranquilizing the animal was not an option as the tranquilizing medication is toxic to humans and remains in the animal’s system for 30 days so, if the moose were to move to a neighboring state where it could be hunted, anybody who ate the moose would be at risk.