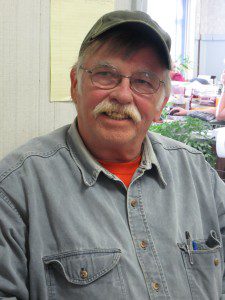 WESTFIELD – Despite the fact that he has no opponent, City Council Ward 3 candidate Brian Hoose is working for your vote.
“I’m not taking anything for granted,” the Arnold Street resident said.
Hoose, currently the chairman of the Off Street Parking Commission, can often be seen walking through his ward with his trusty sidekick – his dog.
“I don’t have to knock on too many doors because I’m always out with my dog,” Hoose said. “I was out campaigning one day and I was dressed up and people didn’t recognize me without my dog!”
It’s not easy to forget Hoose’s dog, a Louisiana Catahoula Leopard Dog he adopted from Southwick.
Born and raised in Holyoke, Hoose learned at a young age that involvement in your community pays off.
“I’ve been involved in politics since I was 14,” he said. “I worked on Ted Kennedy’s first campaign.”
Hoose said he was inspired by President John F. Kennedy’s call for Americans to ask not what their country could do for them, but what they could do for their country. Hoose decided early on that what he could do was try to make a difference.
“I grew up poor in South Holyoke to a single mom who worked in factories,” he said. “I became involved in civil rights and youth programs and community service.  I was able to – as a kid – have an impact.”
Hoose hopes to have a positive impact on Ward 3. He listed improvements at Whitney Park, Allen Park and Grandmother’s Garden, as well as downtown parking, as priorities.
“There had been a Whitney Park Neighborhood Association and I’d really like to bring that back and get more neighbors involved,” he said.
Hoose said he believes the park itself needs some improvements and additions, such as a water fountain and maybe even a dog park. He said he believes there are grants available to help cover costs.
Hoose cited concerns about vandalism on Holland Avenue as another priority.
“I’ve spoken to residents there who said they have problems with kids running through the yards and vandalism,” said Hoose. “There are some beautiful old homes there. One woman had her stained glass windows smashed and you just can’t replace something like that easily.”
As far as the revitalization of downtown, Hoose has long been a proponent of adding parking and looks forward to the parking garage.
“You can’t expect businesses to locate downtown when there is no parking,” he said, adding it is “a work in progress.”
Hoose is a manager at a group home in Greenfield and has made social service his career since he was discharged from the United States Army in 1971.