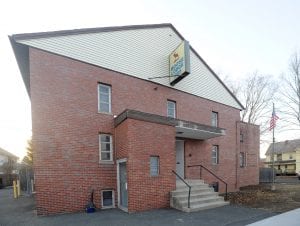 The members of the Loyal Order 0f the Moose in Westfield will serve corned beef and cabbage on Wednesday at their lodge on Washington Street. (PHOTO BY CARL E. HARTDEGEN)

WESTFIELD – The COVID-19 pandemic has been a blow to the city’s fraternal and social organizations and most were forced to close but the Loyal Order of the Moose plans to reopen — just in time for St.Patrick’s Day.
Most of the clubs in the city which maintain social quarters had to close due to the COVID crisis but, as residents start to get vaccination protection, some of the struggling clubs have acquired restaurant licenses from the city and are re-opening on a limited basis. Opening as licensed restaurants, the clubs will be required to be open to the public.
The Moose lodge on Washington Street has committed to reopen and will host a corned beef and cabbage dinner on St. Patrick’s Day, March 17.
Mark Balydyga, a former Governor of the Moose Lodge, said recently the lodge will actually open the day before St.Patrick’s Day and the menu that day will feature corned beef sandwiches (with Swiss cheese and sauerkraut) with chicken salad sandwiches as an alternative “in case anyone doesn’t want corned beef.”
But on St.Patrick’s Day, Baldyga said he will offer a typical Irish boiled dinner – -corned beef, cabbage, potatoes and carrots with rye bread on the side – with beverages available at the bar. The meal will be offered from 3-8 p.m. at a cost of $7,  but “if they come a little later, we’ll stay” he said.
Persons who want to pick up dinner to take home, Baldyga said, can call the lodge at 568 2795 “and I’ll have it ready.”
Going forward, the lodge will be open to the public Tuesday through Friday, 3-8 p.m.. Baldyga said the staples of the menu will include hot dogs, chili, chili dogs and chicken salad sandwiches “but it’ll change.” He said “One day it may be goulash, with bread, but another day it may be beef stew” but he plans to always have the staples available.
He also said that, since the lodge will be open to the public, he hopes that visitors will look around and “maybe they’ll get to see what the place is like, what we’re like as individuals and maybe they’ll want to join.”