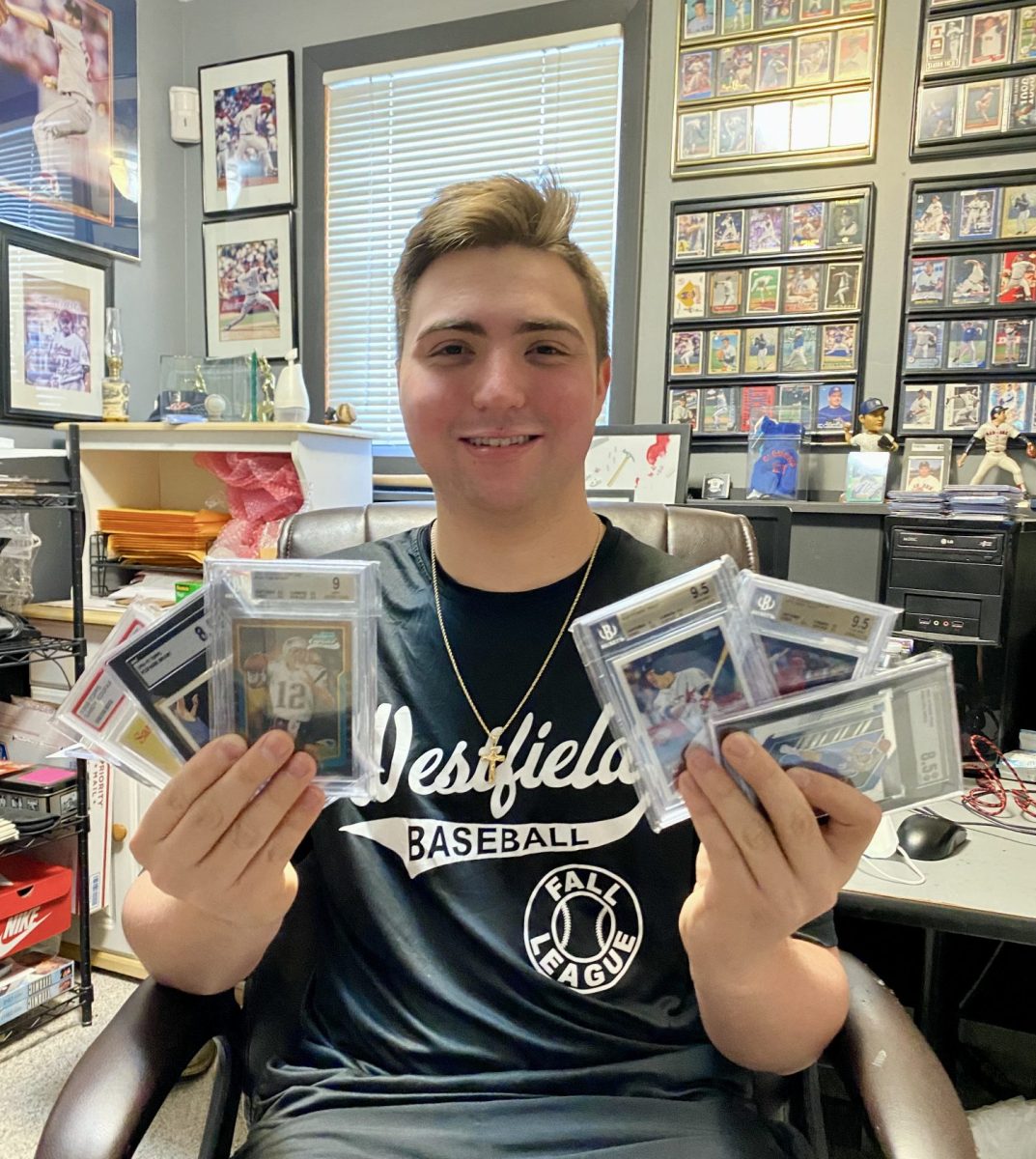 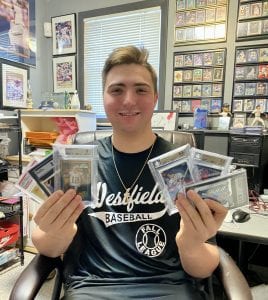 Troy Hevey, 16, of Westfield displays some of his most treasured sports cards. (CHRIS PUTZ/THE WESTFIELD NEWS)

WESTFIELD – The start of the high school baseball season is several weeks off, but Westfield High School junior shortstop Troy Hevey is busy racking up hits.
Hevey, who is also expected to be part of a pitching rotation which includes ace Brian Strange, has been buying and selling sports cards. For four years now, Hevey has received several hits on e-bay, turning a profit of more than $15,000 flipping baseball and basketball cards.
“It’s something fun to do,” Hevey said. “I like to hang out with my friends on the field, but business is my passion.”
Although it may have started as a single idea, Hevey is now sharing that enthusiasm and knowledge of the business with teammates, some of whom are good friends.
A YouTube video of people opening packs of sports cards peaked Hevey’s interest four years ago. With just $50 in his bank account, Hevey managed to secure a PSA7 Bowman Chrome Mike Trout for $60. He sold it a week later for $100. Card pack opening Friday nights followed.
Hevey continued to flip Mike Trout rookie cards and began buying and selling basketball cards. At one point, he had eight Kobe Bryant rookie cards. After Bryant’s death, each of those cards skyrocketed in value from $20 apiece to $450 for just one. He sold them for a profit.
The financial windfall from a profitable market is just one of the major draws though. There’s something else that lured in this energetic, enthusiastic 16-year-old.
“It’s a business I can run on my own without a boss telling me what to do,” Hevey said.
While the coronavirus has negatively impacted a lot of this nation’s youths with school schedules thrown into a constant state of chaos, isolation and angst at all-time highs, Hevey acknowledged that “the pandemic has affected me in a good way. The (sports card) industry is booming.” 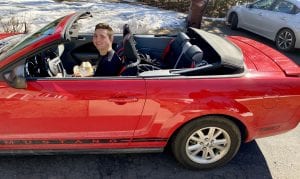 Troy Hevey, 16, of Westfield, sits behind the wheel of his 2009 Mustang, which he purchased with the profits from his expanding sports card business. (CHRIS PUTZ/THE WESTFIELD NEWS)

Hevey has pulled an Alex Bregman autographed rookie card, valued at approximately $1,400 out of a $20 pack of Bowman Chrome baseball cards. His favorite possession includes a Topps Mike Trout rookie card which one day is likely to surpass even some of the best stocks on Wall Street, and a Bowman Chrome Tom Brady rookie card, estimated to be worth about $7,500.
Hevey estimates he has flipped some 300-400 sports cards – – several of which recently have included star forward-guard Luka Doncic rookies – – worth nearly $30,000. As his business has grown, he has learned how to grade a card, what cards sell beller, and has become a top-rated buyer.
But that is not all.
This savvy investor bought a pair of Gucci handcrafted leather shoes for $8 and sold them for $280. After some Dr. Seuss books were just pulled off shelves due to claims of racist overtones, he sold one for more than $100.
All of this led to his purchase of a 2009 Mustang for $10,000. With the help of YouTube videos and a little help from Dad, Hevey is likely to boost the value of this sports car in no time at all with constant upgrades.
It is not all business for the budding businessman though.
Hevey serves as a Westfield Police Cadet, having helped out at the homeless shelter, aided with the Christmas Toy Drive, and performed traffic duty during a 5K race. He also currently plays for the North-East Dragons Baseball team out of Southwick.
Hevey plans to attend trade shows in the future, and continue to expand his card business.
To follow Troy Hevey on Instagram or Ebay visit whipcityshop.