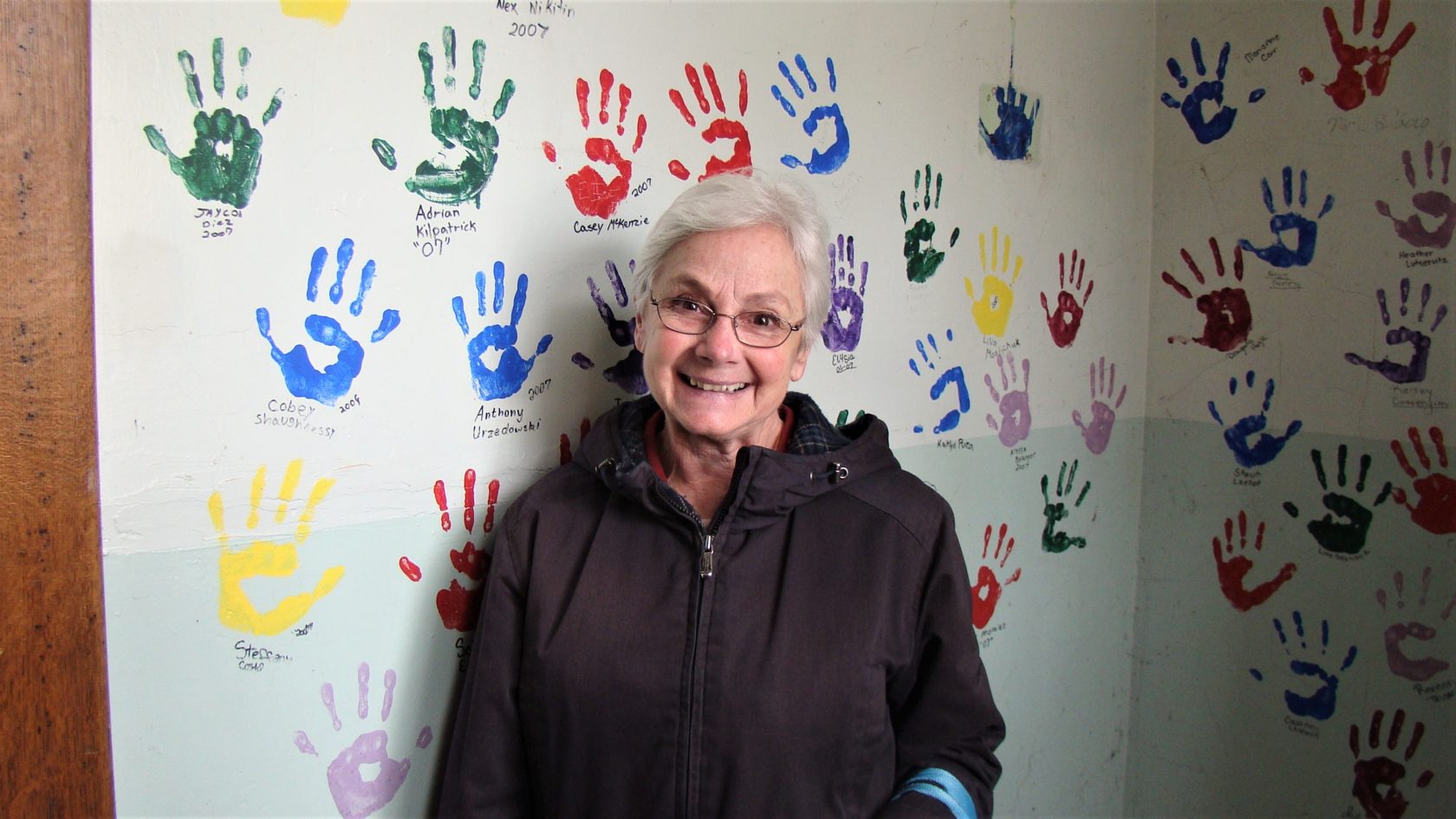 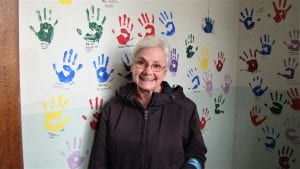 WESTFIELD – As she always does, DOMUS Inc. Executive Director Ann D. Lentini is preserving the historic features of the Moseley Elementary School on 25 Dartmouth St., as she works to turn it into 23 affordable housing units.
Lentini said Moseley, which was built in 1914 and added onto in 1922, is the eleventh historic building that she has repurposed for housing. “It keeps history,” she said.
One of the features being kept are the student handprints on the walls inside one of the entrances to the old school. Although not as old, dating back to the early 2000’s, Lentini said they are a part of the history of the school. She said they plan to patch the walls, then cover the handprints with plastic laminate and frame them. “They are unique,” she said.
Quickly walking through the huge three story edifice, Lentini points out other features being maintained. She said in the 1914 section, they are preserving all of the granite and brick that frame windows and doors and line the walls. 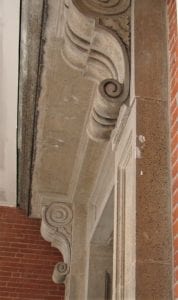 A formerly exterior granite door will be preserved in the new addition. (Photo by Amy Porter)

Inside the new addition on the side of the building which will house the elevator, she marvels at an existing granite columnar doorway, which she called “so fabulous,” and will be kept as well, along with the exterior granite doorways.
The basement, which has also been extended, will have seven apartments as well as a craft room and a library for the kids in the building. Looking at the framing for the craft room, Lentini doesn’t see the work under construction, but the finished product, with children working on arts and crafts and puzzles with volunteers.
The Westfield Athenaeum has donated tables and chairs, desks, books and bookcases for the craft room and library, Lentini said. She will also set up computer stations in the library, with extra computers from her GED classes. Everything gets repurposed, she said. 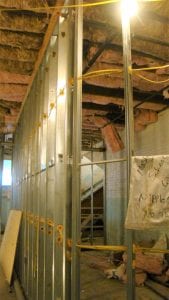 Under construction in the basement, Lentini can visualize the children’s arts and crafts toom that will go there. (Photo by Amy Porter)

Lentini said the building will be supervised and also have camera surveillance on the common rooms, as well as the playground which will go on one side of the building, and a half basketball court on the other. She said the playgrounds will be open to the community, at certain hours.
Other interior features being rehabilitated and kept are the tin ceilings in the 1922 section. The work is being done by Saloomey Construction, the contractor for all DOMUS buildings. As Lentini went from room to room, she was greeted by and greeted all of the workers in the building.
Upstairs, the former stage area for the school presented a challenge for Lentini. She said she tried to incorporate it into one of the apartments, but was not able to. The stage is next to three ceiling high windows, and too dangerous she feels for the children she expects to inhabit the one, two and three bedroom apartments. The solution she found was to put a glass wall on the stage area, and use the space inside for holiday and other exhibits for the residents to enjoy, but not enter. 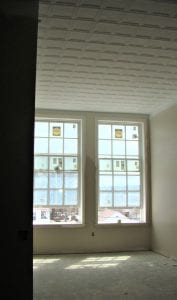 With their high tin ceilings and tall windows, the apartments on the upper floors, which are furthest along, are shaping up into beautiful spaces. Lentini said she expects the work to be finished by the end of August or beginning of September of this year.

Also being preserved are the wood floors and wooden staircases, which will be stripped and cleaned. 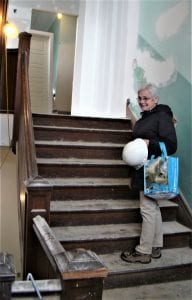 DOMUS Executive Director Ann D. Lentini on a wooden staircase to be preserved along with the wood floors. (Photo by Amy Porter)

Lentini said DOMUS will be starting in a few months to take applications for the apartments, six of which will be subsidized, at its main location on 4 School Street. Connie Maryea is the tenant selector for DOMUS, and may be reached at 413 568-4494.

Lentini doesn’t get involved in that aspect of the project. Her work is rehabilitation. “It will be really neat,” she said.