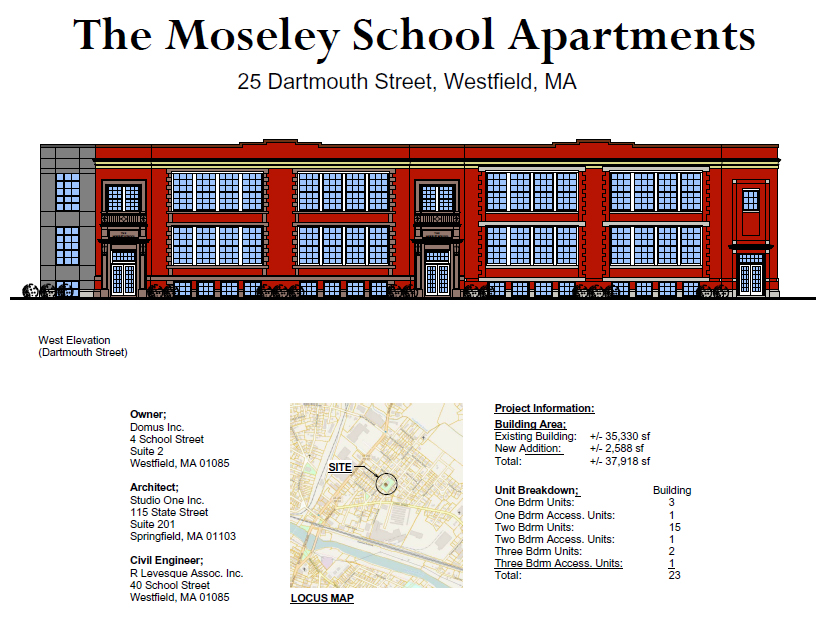 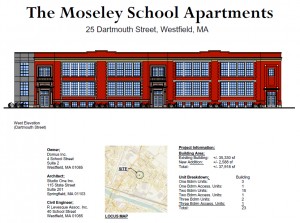 WESTFIELD – Reconstruction has begun on the Moseley School Apartments on Dartmouth Street, after closing on the building in July, according to Ann D. Lentini, Executive Director of Domus, Inc. which is renovating the former Moseley School for affordable apartments.
“We’ve already started reconstruction,” Lentini said, adding that they are expanding the elevator and adding an entire section for all three floors, along with a laundry room and mechanical rooms.
Lentini said the building will hold 23 rental units of 1, 2 and 3 bedroom apartments for low to moderate income households. The project, which Domus introduced to the neighborhood in 2016, took longer to close than originally anticipated, and construction on the addition started slowly due to the rain. She said the construction is now “full steam ahead,” and expects the project to be “realistically” completed by August, 2019.
“We are working with the Historic Commission,” she said, adding that the brick and structures will be matched for the new addition. “It will be quite a beautiful building,” Lentini said. They are also planning a playground on one side, and a half basketball court on the other. While the front of the building is on Dartmouth Street, parking and entrances will be on Woodmont Street. 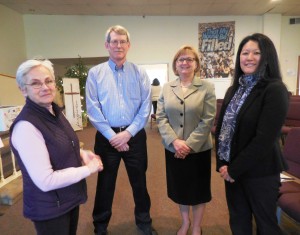 Lentini said applications for apartments in the building will be available in January or February, and according to state regulations, there will be a lottery for apartments. “We don’t have any problems in getting people,” Lentini said, adding, “We’re still not up to our 10% affordability with the city.”
The project received $200,000 in Community Preservation Act (CPA) funds from the Community Preservation Committee, along with state and federal funding.
This is the eleventh project for Domus in Westfield. Domus also rebuilt Prospect Hill apartments at 33 Montgomery Street, and more recently completed “Our House,” a house for homeless teenagers in the old Red Cross building at 48 Broad Street. Lentini said the Moseley School apartments will be “similar to the Prospect Hill apartments.”
“I don’t do huge complexes. I renovate historic buildings to repurpose them and maintain them within the community,” Lentini said. “It makes you feel like you’re a part of the history. We retain a lot of the features of the buildings,” she said, adding that she is always looking for older buildings that need to be renovated.
Lentini said they oversee all of the apartments so “folks” can feel comfortable and be happy, and want to get involved and give back to the community. “Creating communities within our community, that’s what DOMUS does,” she said.