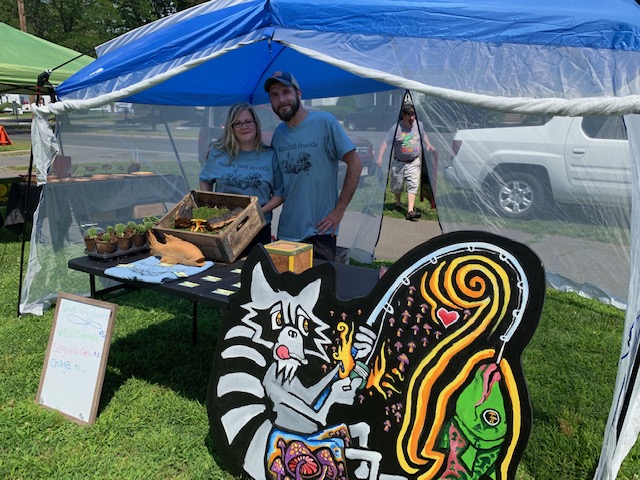 WESTFIELD-Brent Puza and Alyssa Serrenho enjoy the great outdoors and are sharing their enthusiasm – and foraging skills – with area residents through a unique business, Nature Will Provide.

Puza, an avid hunter, fisherman and forager, introduced Serrenho to his hobbies more than a year ago and soon she was hooked. 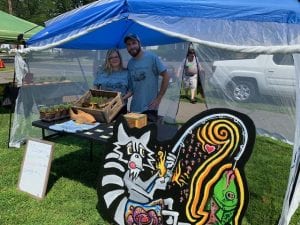 Alyssa Serrenho and Brent Puza are eager to share the mushrooms they forage in the hilltowns. (Lori Szepelak photo)

“I grew up in Southwick and Belchertown,” said Serrenho. “When we were kids we were always outside playing in the woods.”

Puza, a lab technician at Mestek in Westfield, launched Nature Will Provide in 2010 and enjoys taking people of all ages into nature to expose them to the bounty that awaits – on land and water.

On Thursdays this summer and fall, the couple will sell a variety of wild foraged mushrooms that they harvested from select areas in the hilltowns at the Westfield Farmers’ Market. The market is conducted from 12 – 6 p.m. on the front lawn of the Episcopal Church of the Atonement. 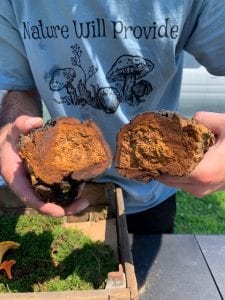 Brent Puza of Nature Will Provide displays one of the offerings – Chaga. (Lori Szepelak photo)

“Chaga is a medicinal mushroom that we find on birch trees,” said Puza.

“My mom has had a Saguaro cacti for 70 years and once a year it blooms,” said Puza, adding over the years the family has pruned the cacti and some of the offshoots are now for sale.

One element that is needed for the couple to bring the bounty to the market each week is water.

“Our bounty all depends on Mother Nature,” said Puza, adding, “We need rain.”

Serrenho, a hairdresser, notes before she goes to work she is out foraging for mushrooms from the knowledge she has gained from Puza.

“I teach others how to open their eyes to nature,” he said, noting most days after work he is out scourging favorite areas for a variety of mushrooms. “Ultimately, we want to grow the business by teaching people tricks of the trade.”

One of the ways that the couple expects to expand its business model is through a “hook and look” excursion.

Puza, a professed “big fisherman,” said he enjoys taking people of all ages out fishing at scenic fishing spots and state parks, however, each individual must have a valid fishing license.

“If someone is just getting started fishing, I can help them feel comfortable and confident,” said Puza. “Through college ecology classes and extensive research, I can also assure everyone we will find edible mushrooms during the day’s trip.” 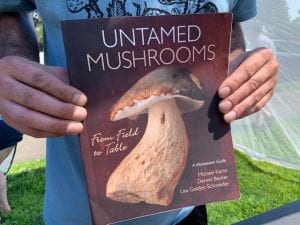 Puza also enjoys explaining the importance of picking mushrooms correctly while in the woods.

“You are helping the plant when you pick it correctly,” said Puza, adding, “it’s like clipping a rose bush.”

For more information on Nature Will Provide offerings, call Puza at (413) 563-3479 or send an email to him at [email protected].

“I love the aspect of this business that we can be outside, it’s fun and we can do it together,” said Serrenho.