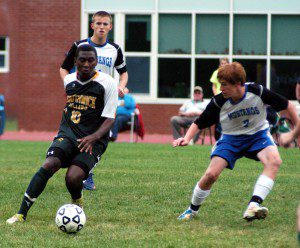 MONSON – The Southwick High School boys’ soccer team ran into a buzzsaw on the road at Monson Thursday.
Liam Christian scored one goal in each half as Monson took a 3-0 lead en route to a 3-1 win over Southwick. Rams’ Ryan Harper headed in a ball off a deep kick from Andrae Campbell for the team’s only goal with 22:39 remaining.
Monson’s first goal came in the 13th minute, when Christian went top shelf, squeezing a rising shot inside the near post from about 20 yards out.
The Mustangs (7-1-1) added their second goal less than three minutes into the second half from Pat Murphy.
“Other than Belchertown, it’s probably one of the more skilled teams we’ve played this season,” said Southwick coach Frank Montagna, whose Rams fell to 4-3-3. “They’re tactically sound. They have good technique.”
Campbell did all he could to try and keep Southwick active offensively and defensively. The senior forward, when not double-teamed, attempted to set up teammates, broke up passing plays from Monson, and even slid in to help out his goalie by kicking away another potential Mustangs score on a ball in the box in the second half.
“Andrae played well in the middle,” coach Montagna said. “He had some energy.”
Montagna said his team has taken care of business against lesser foes this season, but is still trying to chop down stiffer competition.
“Right now we’re battling to be able to play against some of the good teams,” the Rams’ head coach explained. “The last 20 minutes, we picked it up (today).”
Tim Reardon (2 saves) and Patrick King (5 saves) split time in goal. King made a diving save in the second half, which prevented yet another Monson goal.
Granby 2, Gateway 1
Curtis Dowers scored the lone goal for Gateway, who fell to 3-3-3. Ben VanHeynegen assisted on the play.
Granby tied the game on an own goal and notched the game-winner in the second half.
JV BOYS’ SOCCER
Southwick 1, Monson 0
Dylan Buscemi scored on a pass from Liam Jackson for Southick’s lone goal, the game-winner. Danny Sullivan and Adam Jensen provided great goaltending in the Rams’ shutout.