I’m not entirely sure how it happened. It seems like all of the sudden, there they were. Seventeen indoor potted plants. Maybe that seems way overboard to some while others would say I have not scratched the crazy surface yet.

Is it COVID? Did it make me seek out something to care for? I mean, I have kids so that can’t be it.

Is it the influence of my preteen daughter who developed her own “aesthetic” as she calls it, which included a Boho-Harry-Potter bedroom makeover complete with macrame wall hangings, faux plants and vines?

I think it may be a bit of genetics. I come from a line of crazy plant people. My grandparents had many plants indoors and out while I was growing up. My grandfather was more interested in the outdoor plants. We had a tiered rock garden filled with many varieties of perennials and annual blooms as well as vegetable gardens. We annually visited Pat’s Greenhouse in Granville to add to the garden, a trip I always enjoyed.

My grandmother was more interested in indoor plants, especially cacti. 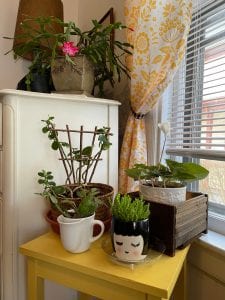 A few of Hope’s indoor plants.

My mother and aunt and cousin also qualify as crazy plant ladies (my aunt has the mug — and plants – to prove it), I just never thought I’d join this club.

As a kid, one of my chores was weeding the aforementioned garden. It was probably only four tiers, but in my mind, it rivaled the Royal Botanic Gardens. It was definitely large, but as a 12-year-old who wanted to earn money for the latest Duran Duran 45 record, it felt like I was groundskeeper at Versailles. Or at least Stanley Park. It was hard work and it was hot and sweaty and there were bugs. And sometimes snakes. It was not my favorite chore by any means and until many years later I had no desire to garden indoors or out.

But that definitely changed, and I like gardening. Pulling weeds to reveal a beautiful bloom gives me great satisfaction and has for many years now. But being a crazy plant lady is new.

I’ve always had a few plants but nothing “crazy.” My most treasured plant is a peace lily I received when my Pop died in 1999. It was a gift from my male housemates and it continues to bloom and grow nearly 22 years later. Last summer I split it into three, which greatly upped by plant lady status. Also last year, I took over the care of several of my mother’s plants, including a Jade plant and a Wandering Jew, among others. My daughter inherited my grandmother’s affinity for cacti, but not her green thumb, so I now count her plants among those I water weekly.

I admit I’d probably have more plants if I had a few more sunny windows, but I am already thinking ahead to my outdoor plantings and will be starting some seeds indoors. I also have plans for a bigger herb garden this year that involves wine crates and a wood frame. Did I just write that? Apparently, I really AM a crazy plant lady, but I’m owning it.

Feel free to send me your plant and gardening tips to [email protected] newsgroup.com.