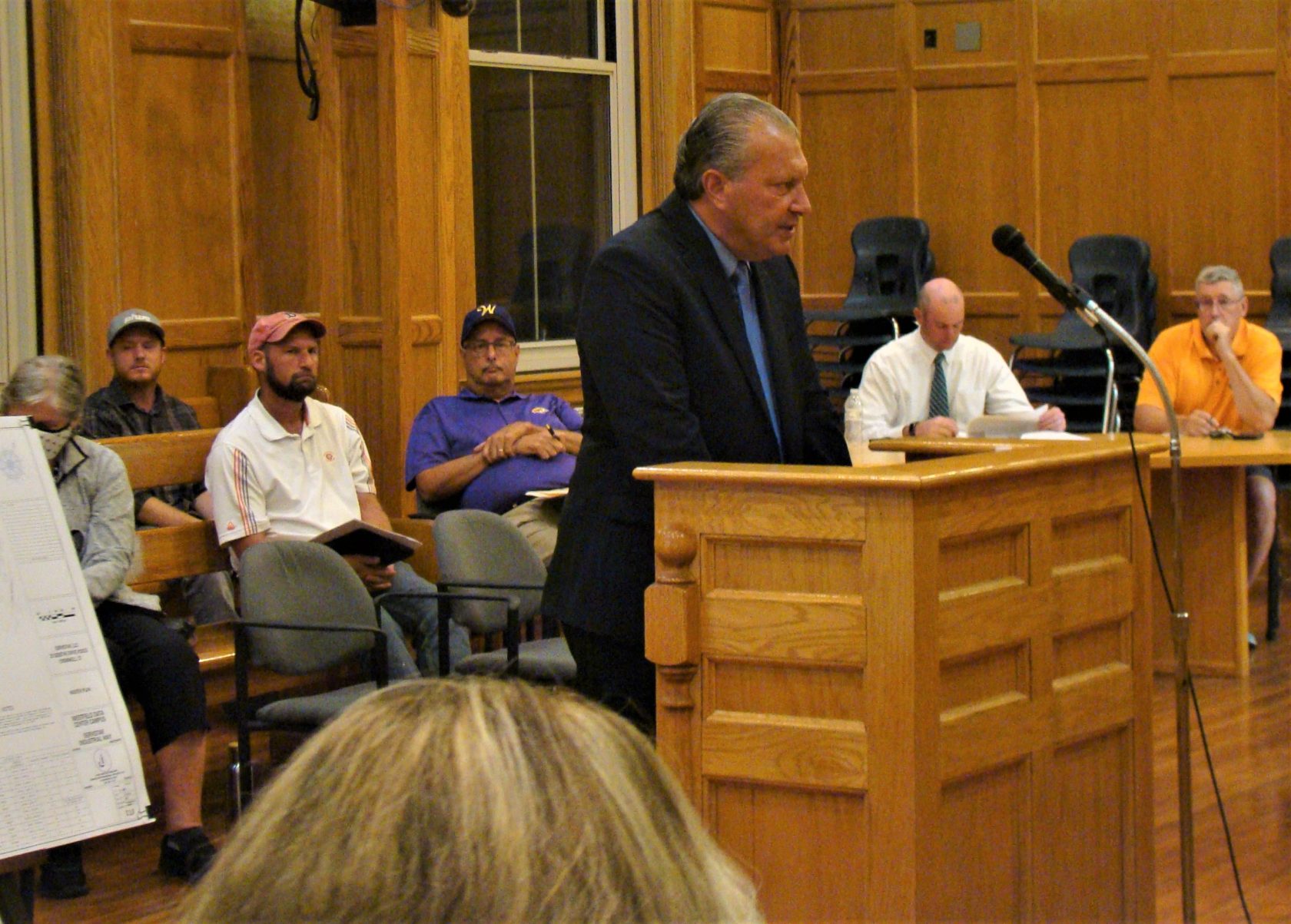 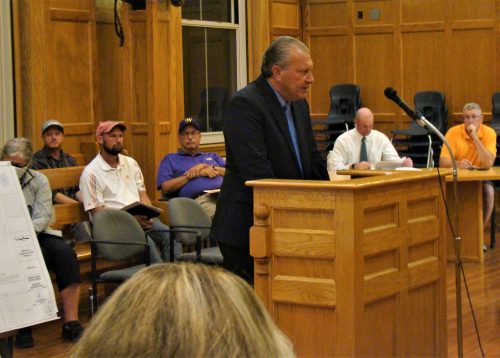 WESTFIELD — In the second straight night of discussions about the Westfield Data Center proposal, the Planning Board on Tuesday questioned how much water the massive development will use, potential air pollution, and its impact on wildlife.

Several Ward 1 residents expressed concern about the loss of open space and wildlife habitat, and the impact that removing trees would have on air quality.

“I walk and run up there. I don’t think people spend a lot of time outdoors … observing how beautiful this site is,” said Joshua Ouellette of Meadowbrook Lane, calling it the loss of a way of life. “We live in Western Mass. for a reason. We don’t live in Boston.”

The $2.7 billion Data Center would consist of 10 buildings on a site of 162 acres off Servistar Industrial Way and Ampad Road. At an Oct. 4 meeting, Paul Corey of Servistar said 53 acres of the site will be protected.

Ouellette was allowed to show a brief presentation, listing the wildlife in the area, including bees, butterflies, hummingbirds, black bears, coyotes and bobcats, fox and raccoons. He said at one time there were turkeys and pink lady slippers, which are gone.

“These things don’t just live on little patches,” he said, adding that it’s a misconception that the area is blighted.

At Tuesday’s meeting, former Ward 1 resident Mary Ann Babinski asked developers to consider greener solutions in the design of building systems, such as heating and cooling.

Barbara Rokus of Lockhouse Road said the project is right in the middle of three properties that serve diesel trucks — Duie Pyle, Lowes and Home Depot.

“Right now, those trees are the only protection against air pollution,” she said.

Rokus quoted Rachel Carson in saying, “In nature, nothing exists alone.” She said one tree that is removed impacts 47 forms of life.

Also discussed was habitat for the Eastern box turtle, which is listed as a species of special concern in Massachusetts.

Eric Bartone, the principal of Servistar Realties, said a 13-acre parcel by Lowes Home Improvement was identified as core habitat for the turtles. He said Servistar removed plans for an 11th data center building in order to make a gateway from the Lowes site to an adjacent parcel.

The Planning Board continued its public hearing on a special permit, site plan, and stormwater permit to its Oct. 19 meeting.

At the Oct. 5 meeting, civil engineer Michael Lambert, project manager with Curtis Jones and Associates, said of the Westfield Data Center’s total project area of 162 acres, 35 percent will be impervious, with a 58-acre disturbance.

For Data Center 1, the first of 10 buildings to be constructed over 12 to 18 years, 10 acres of trees will be cleared, Lambert said. Water usage is projected at 10 gallons for each of the 40 employees working in three shifts in each data center, using 400 gallons per day per building. There is a water main off Servistar which will meet the demand of the project, he said.

Planning Board member Robert Goyette asked if cooling is included in the projected water usage.

Corey since most of the HVAC water is in a closed system, with only a little water needed to replace evaporation in the pressurized plumbing line. He said glycol, a biodegradable product, will likely be used to prevent freezing.

Planning Board Member Philip McEwan asked whether the technology has changed in the past few years.

“What I read online is that data centers are water guzzlers,” he said.

Corey said they are evolving. Whereas old systems would rely on cooling towers, which require a lot of water, the new systems use air cooling.

McEwan asked if they could commit to using a certain amount of water, saying that a current industry newsletter talks about a data center using the equivalent of 13,000 households of water. Corey said they can’t commit, but engineers are going to design systems with the current technology.

“Water is very expensive,” Corey said, adding that the industry’s interest is to move away from water usage for cost-efficiency reasons.

Bartone said engineers will design the HVAC, but he doesn’t have the designs yet.

“We’re not going to design buildings and spend money without having approvals,” he said.

Planning Board Chair William Carellas asked Bartone if he had designed a similar building in the past. Not directly responding, Bartone said the buildings are moving to air-cooled systems in areas where water is expensive, and in the north where they can be air-cooled. He said the data centers will be served from the water main, and no wells are going to be drilled.

Planning Board member Jane Magarian asked if there are any ways to use recycled stormwater in the cooling systems. Bartone called it “a novel idea.”

Asked about noise levels, Corey said a sound study which was filed with the Planning Board took into account all the potential noise from the project — rooftop chillers, onsite generators (12 plus one backup per building), and the onsite substation.

“The results were very good for the output on noise,” he said, adding that it would meet state and city regulations.

Bartone said the 3- to 3.5-megawatt generators are pre-packaged in a unit that sits on a concrete pad, and under the unit is the fuel storage of 6,500 to 13,000 gallons per generator. No storage tank would be anywhere else on site, he said, and the generators would be located in the rear of the buildings. They will be double-walled, double-lined and baffled.

“We’re going above and beyond and taking extra measures,” he said, adding that the diesel generators can only be used for emergencies, and will not run otherwise except for an hour a week to exercise them.

Asked whether any other hazardous chemicals would be stored on site, Bartone said other than glycol for HVAC maintenance, “nothing of any significance.”

One innovative proposal the company is exploring is using the heat from the underground heating systems for snow removal. Bartone said 10 acres of roadway will be very expensive for snow removal, and they are looking to find creative ways to use the heating as a cost savings potential. “We’re looking at it. The infrastructure cost is relatively small,” he said.

The Planning Board also voted 6-1 to recommend approval of a Chapter 161A agreement for the site, which would allow the Data Center to make payments in lieu of taxes instead of paying the standard rates for real estate and personal property taxes. Chapter 161A of state law allows cities to negotiate PILOT agreements to encourage development of industrial properties considered substandard or blighted. The agreement negotiated between Servistar Realties and Mayor Donald Humason Jr. is expected to bring $350 million to $360 million in revenues over a 40-year period.

Planning Board member John Bowen, the lone vote against the agreement, and alternate Richard Salois, who did not vote, questioned whether Servistar had met the requirements of the state law.

The City Council will vote on whether to approve the agreement. It is expected the council will receive the recommendation at its Oct. 7 meeting, and refer the matter to its Finance Committee for study.