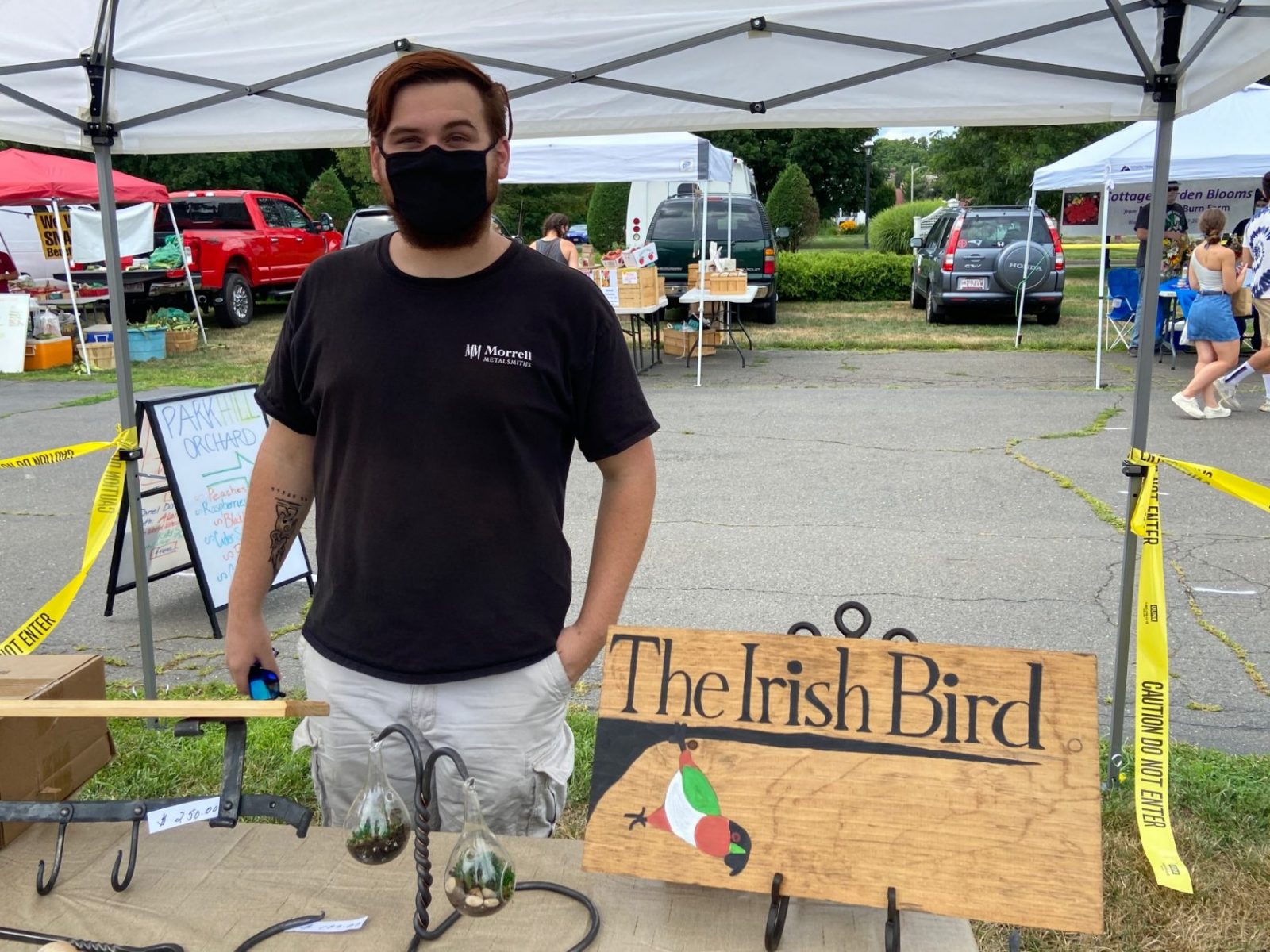 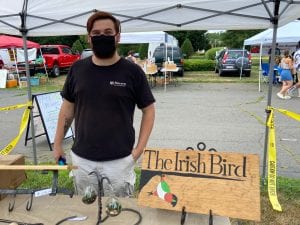 WESTFIELD-Sean Berube is forging a new career path – setting his sights on blacksmithing.

“I would have been going into my senior year at Westfield State University,” said Berube, noting he had originally planned one day to work in the psychology field. “When my dad recently passed, I knew I needed to follow instead what I am most passionate about.”

Berube, at 22, said blacksmithing “has made me find a purpose.”

While Berube has spent close to two years creating custom work in a shed in the backyard, he is eager to learn from the masters of the trade when he enrolls this fall in a bachelor of applied science program at the American College of the Building Arts in Charleston, S.C.

“I was just accepted two months ago and I couldn’t pass that opportunity up,” he said.

Berube said he has always found blacksmithing “interesting,” and noting throughout history, the blacksmith always played a central role in a town setting. 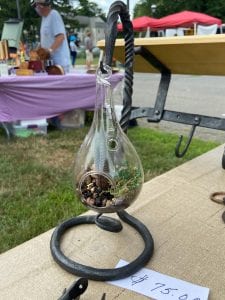 This terrarium is one of the unique items offerded by the Irish Bird at the Westfield Farmers’ Market. (HOPE E. TREMBLAY/THE WESTFIELD NEWS)

“The blacksmith was always using cutting-edge technology for the time,” said Berube, adding after he had taken a six-week program at Morrell Metalsmiths in Colrain, he was “hooked.”

As noted on the American College of the Building Arts website, a skilled metal artisan is able to “forge, join, and weld materials to create unique objects of utility and beauty.”

For Berube, his first two years will concentrate on traditional forging, then in the third year, he will be introduced to contemporary welding tools and techniques, as well as working with steel and bronze. In his fourth year, Berube will integrate the traditional with the contemporary to complete a series of difficult projects.

“While I’m happy with my growth this year forging items to sell, I am still working on my style,” said Berube, noting his ultimate goal is to create sculptural art. “I want to make art; it doesn’t have to have a function but I want to be very proud of it.”

On July 30, Berube was selling some of his latest creations to visitors at the Westfield Farmers’ Market on the grounds of the Episcopal Church of the Atonement. From hook racks, small hooks and bottle openers, to small figurines of snakes and whales, Berube was eager to gain input from local residents stopping by his tent.

His business is “The Irish Bird,” and his mascot is Conroy, a black-headed caique who he has had for three years.

“I am at the point where my skills are progressing to sell items and I wanted to continue to have a reason to make new things,” said Berube, noting his decision to participate in the farmers’ market.

He also has an Etsy page with a sampling of his blacksmithing and woodworking pieces that can be found at https://www.etsy.com/shop/IrishBirdForging. 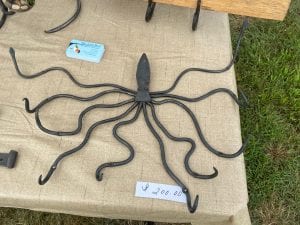 An iron octopus made by the Irish Bird. (HOPE E. TREMBLAY/THE WESTFIELD NEWS)

Berube noted that having a place like the farmers’ market will also make him “keep pushing” to experiment and create new works.

“Having a place to see if people have an interest in my work will keep pushing me,” he said, adding, “I also want to talk to people who are passionate about blacksmithing since I don’t have many people to talk to about the field.”

Berube will be back at the Westfield Farmers’ Market on Aug. 6 before he packs up and heads to South Carolina to pursue his dream. In the meantime, he will be discussing with volunteers how to move forward with the organization his father, Steven, started and which has also been a big part of his life for years.

“I run the Ultimate Sports Program and will continue to run it,” said Berube, noting the organization brings together children of all abilities to instill a message that anyone can accomplish anything when they set their mind to it. “It will be tough moving forward since my dad did the background stuff, however, we are definitely going to move ahead and I am thankful for our core group who will be helping out.”

As Berube gears up for a new chapter in his life, joy fills his heart as a “new blacksmith” who is eager to continue learning all of the aspects of the craft.

“I’ve lived in Westfield 17 years now,” said Berube. “I am leaving it behind which is bittersweet but I am also looking forward to exploring a new part of my life.”