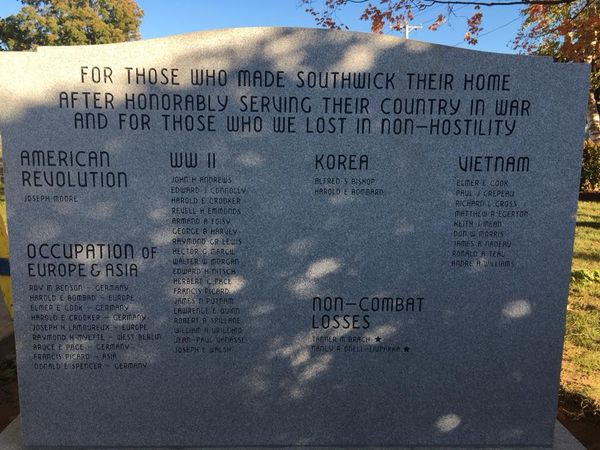 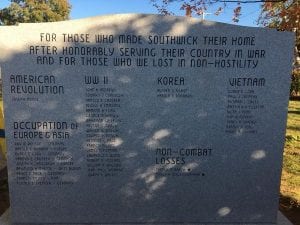 The War Memorial monument in Southwick

SOUTHWICK – The new installation on the town War Memorial monument is complete.

Veterans of Foreign Wars Post 872 and American Legion Post 338 partnered on the project, which was a year in the making. The new portion honors veterans who are longtime residents of Southwick, but who are not from Southwick and began their military journey from another community.

“There are many names on this monument who people will recognize as town fathers and old pillars of the community, and they may well be a bit surprised that we haven’t been able to honor them in this way until now,” said Troy Henke of VFW Post 872.

In order to be on the monument, a person who enlisted in another community must have lived in Southwick a minimum of 40 years after their service. Selectman Joseph Deedy said last spring he was very surprised to learn that some of those recognized were not Southwick natives because they had been part of the fabric of the community.

Henke set out to recruit anyone whose name should appear on the monument wo fit the criteria and said he knew of a few  at the start of the process, which he said took a while.

“The process to erect a monument of this type and to properly vet all names of those who should be engraved is a very patient and meticulous process by all those involved,” Henke said. “The VFW and the American Legion were happy to collaborate on this project together, and we achieved an excellent result. Special mention and thanks to Rick Marcoullier of American Legion Post 338, Selectman Joe Deedy and the Southwick Civic Fund, the Southwick Select Board, Karl Steinhart, Chuck Blood and Emily Dumala of Smith Monuments, and Chet Comee & Sons Concrete for helping to bring this project to fruition.”