SOUTHWICK – Three members in the Water Division of the DPW attended a training at town hall that concentrated on the new software program that the department will be utilizing.

According to DPW Director Randy Brown, the software, called Flex Net, will be used primarily for the water meter project that is currently in progress throughout the town.

With East National Water being the contractor for the water meter project, the Flex Net system will allow the contractor to better identify any leaks in the resident’s water system. 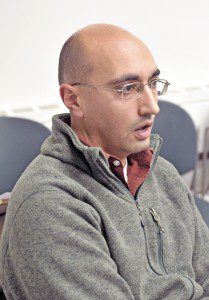 Brown says the system can pick up where the leaks are, for instance, if it is from a leaking toilet.

“It will help us identify if there is a continuous flow in the water meter,” said Brown.

That way, East National Water will be able to reach out to the customer as soon as possible to let them know that they may want to look at their system.

Brown noted that there was a residence just recently that had a leak in their system that was going at the rate of 40 gallons per hour.

The Flex Net System is able to pick up on that type of issue and it’s certainly a program that Brown sees as a benefit for Southwick.

“These things are a great to have at our disposal,” said Brown.

The new system is a part of the $1.4 million water meter project that the DPW received from the town through appropriated funds.