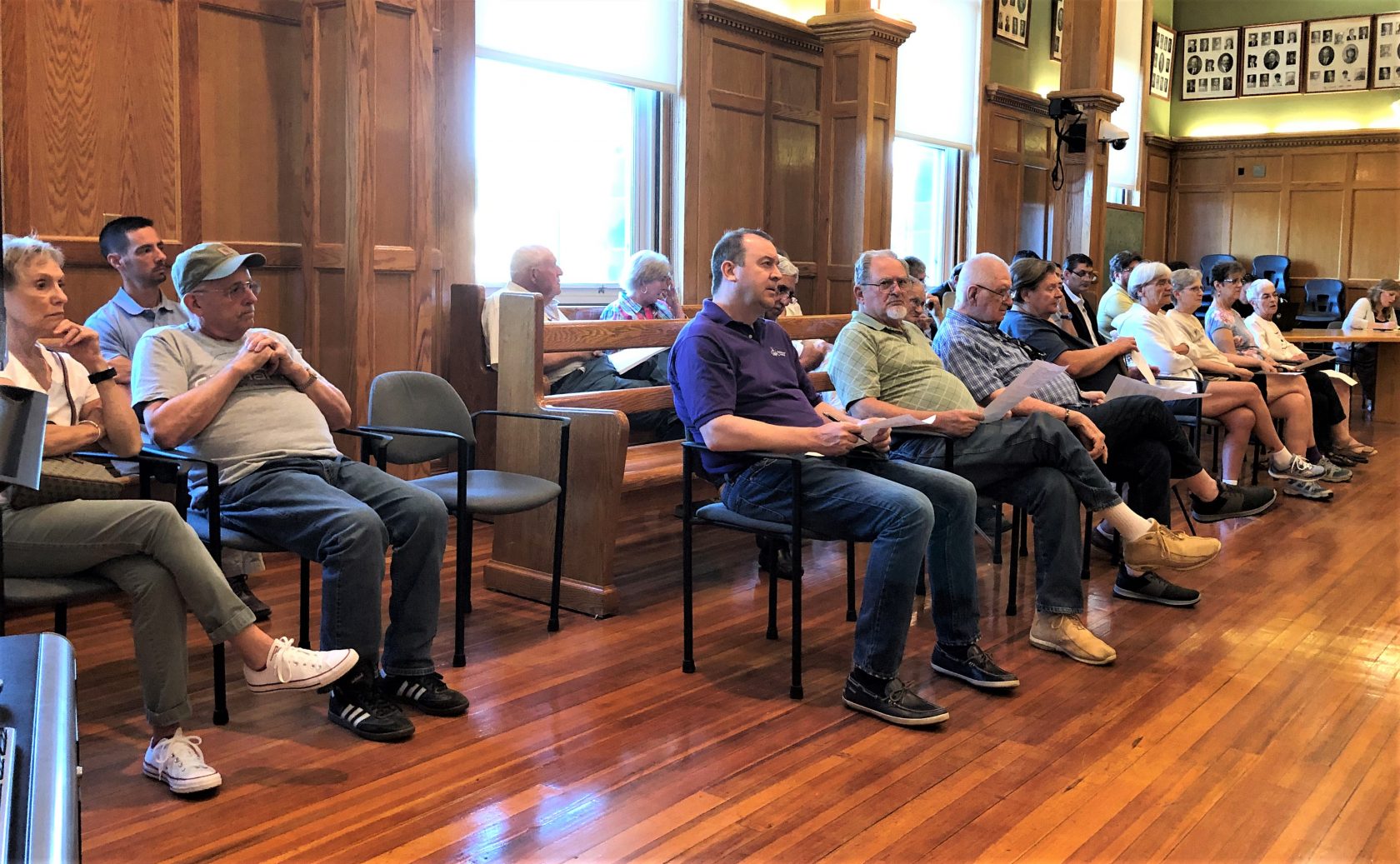 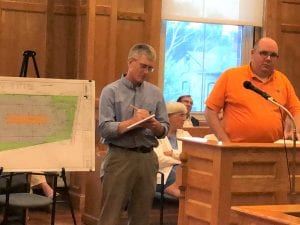 Also returning were a dozen north side residents, including two councilors, who expressed continuing opposition to the plan.
Coon said based on comments and requests for additional information made at the hearing on June 20, the company had made some modifications, including a reduction in radius to a right hand turn onto Medeiros Way, to make it prohibitive. Coon said trucks won’t be able to physically make that turn and go onto Root Road. He said there will also be signs stating no right turn at the exit.
“Regarding concerns about trucks travelling on Root Road. We have no control over trucks, except our own,” Coon said, adding that they had received approval for the modifications from the city.
Coon said he also had a letter from an architect explaining why they did not pursue LEEDS certification, but stated their plan is energy efficient, and meets or exceeds International Building Codes plus additional Massachusetts regulations.
Ward 3 Councilor Andrew K. Surprise asked Coon for more details on the plan’s energy efficiency.
Coon said there will be high efficiency toilet fixtures, sinks, photo sensors on site plus LED lights, thermal and tinted window, high efficiency HVAC and hot water heaters, and recyclable dumpsters for metal and construction waste.
Coon also showed an aerial photograph to demonstrate the distance of the proposed terminal to the nearest structures. He said the nearest residency, Armbrook Village, is 590 feet away from the clearing to the building front. White Oak School is 910 feet away, and the nearest residence, 1,100 feet. He said with existing trees, there won’t be an issue, and the proposed site meets the regulations in the ordinance.
Regarding the property tax, Coon said based on a valuation of $3 million at 2019 tax rates, they estimate the annual property tax would be $115,000.
City Council President Ralph J. Figy then opened the hearing to questions of fact.
In response to a question from At-large Councilor Matt Emmershy, Coon said there would be 43 full-time employees at the site, which will be an end of line terminal. “The same employees every day.”
Tom Williams, manager of the Old Dominion terminal in South Windsor, Conn.,  said it would be all of their employees, as they plan to split the territory with the Westfield location.
Ward 1 Councilor Mary Ann Babinski asked what the hours of operation are now in Westfield. Williams said currently they send two trailers a day to Westfield. He said the majority of drivers leave at 6 a.m. and return by 8 p.m.
Babinski asked if they would be travelling out of the terminal at night. Williams said only to go to other hubs. “Between 6 p.m. and 9 p.m., all our guys are gone. They’re back between 5 and 8 a.m.,” he said.
Babinski also asked about the size of the proposed facility in Westfield, and whether there are any plans to expand the terminal.
Coon said the company reduced the size of the expansion. “What you see is what you get – 26 tractor spaces, maximum,” he said. The original proposal last September included plans for a future expansion. 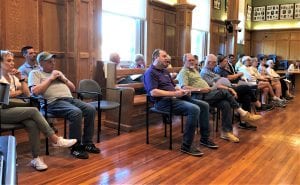 North side residents continued in their opposition to another truck terminal on Medeiros Way. (Photo by Amy Porter)

Charles Mucciarone of Warfield Drive gave a list of concerns of north side residents. “As you know, we have a lot of semis and tractor trailers using our roads, particularly Root Road, Southampton Road, and Medeiros Way. The roads are patched several times a year,” he said, adding that the infrastructure cannot handle the traffic.
Mucciarone also said by 4:30 a.m., there is a line of trucks from C&S Wholesale in the area, and asked if there were any provisions for sound control. He also said the residents have had a problem with lights from a soccer field on Root Road, and asked about the lighting plan and the potential water usage.
Coon responded by repeating that the company will be restricting turns so trucks cannot go down Root Road. He said the trucks are state of the art with anti-idling measures that won’t run beyond 3 minutes.
In addition, he said they have provided a lighting plan, with no leakage, and will not be washing vehicles on site.
John Keilch of Root Road said by his calculation, the property taxes would be $65,000. Coon said he didn’t do the calculations himself.
Keilch also commented on the statement that the longest trailer would be 53 ft. He referred to the traffic study Route 10 and Medeiros Way, with current average daily traffic of 15,000 vehicles. “Currently, there are 2,200 trips on Medeiros Way, and you’re not there,” Keilch said.
Coon said 428 daily trips based on their study showed no impact on traffic.
“Has the DPW done a cost analysis of road repair, will taxes cover road repair, and if not, will taxes need to be increased,” asked Maria Lankowski of Beverly Road.
At-large Councilor Dave Flaherty of Marla Circle, asked whether there is any commitment from Old Dominion to pay property taxes on trucks and trailers, to which Coon replied no commitment had been made.
Kristen Mello of Mosely Avenue asked regarding energy efficiency, if they had any idea of how the reduction of trees would increase ambient heat? Coon said that study is not required, and he didn’t know how he would do that. The proposed site is currently wooded, and will be cleared for the terminal.
Constance Adams of Root Road asked Coon whether he was aware of enforcement action for the west side neighbors on Medeiros Way that had built a stream to drain off water because it’s so wet. Coon replied he was not aware of the action.
Adams also asked whether Old Dominion is investigating driverless trucks. “Not that I’m aware of,” said Williams.
Matthew Roman of East Mountain Road then came forward to speak in favor of the business. “The City Council is here to run the city as a business. We need to start encouraging the right kind of business, that’s what you’re here for. They’ve already gone through this rigmarole,” Roman said, adding that he knows John Medeiros, who is in favor of having the company on his named road.
Kate Phelon, executive director of the Greater Westfield Chamber of Commerce asked the Council whether they had received a copy of her Letter to the Editor published in The Westfield News. “I ask for support of this petition,” Phelon said.
Dave Flaherty then came forward to speak against the petition as a resident. He said he missed the first public hearing, and could not vote on the permit.
Flaherty called Old Dominion “a wonderful company, very responsive,” but said for a special permit, they need to consider the neighbors. “$65,000 to $115,000 in taxes is not a good answer for the cost of ripping trees,” he said.
Flaherty said in reality, there are currently only two trucks a day from Old Dominion in Westfield, and by their own estimate, there will be 26 trucks. He said in the past, they were referred to as medium-sized box trucks, but will be 53 foot trailers.
Flaherty said there are nine required findings for a special permit, and number eight requires preserving sensitive environmental features. He said another required finding is that it will not adversely affect the neighborhood.
“I’m opposed. Old Dominion is a wonderful company. I want to take care of the people already in Westfield,” Flaherty said to applause.
“I’m concerned about the roads,” said Mucciarone in opposition to the plan. 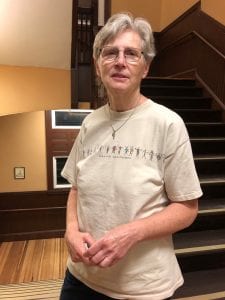 “I’m definitely opposed to any more trucks coming, not to Old Dominion – especially for the residents of Hampden Village, who have had to deal with the condition of Root Road,” Patricia Ovitt said following the meeting.(Photo by Amy Porter)

Patricia Ovitt of Hampden Village on Root Road said many tractor trailers take the turn down Arch Road to Root Road, and asked what’s to keep Old Dominion trucks from returning the other way. She also said she was concerned about the condition of Root Road, and had contacted Babinski, her ward councilor, a number of times about it.
Constance Adams said her concern is about endangered creatures; the Eastern box turtle, lady slipper, and salamander. She also said another truck terminal on Medeiros Way is in the Planning Board. “We’re having problems with climate,” said Adams, adding that truck terminals aren’t the answer. “We will have destroyed woodland,” she said.
“This is where discretion comes into play. Businesses should be in existing buildings,” said Mello.
“I am going to be opposing this project because I’ve been hearing from residents for many years, not only about this project,” said Babinski, adding that the property had not always been Industrial, but formerly was Rural Residential and Residential.
Babinski said starting in 2010, she had fought alongside many residents not to change the zoning.
“I’ve been fighting this battle for a long time as a non-councilor and as a councilor. The north side is over-burdened with planes, trains, trucks. Truck routes are not being used or enforced. We don’t get a warm fuzzy feeling,” Babinski said.
Babinski said she sees cars and trucks piled up bumper to bumper at the turnpike exit for 20 to 30 minutes hardly moving. “Those other truck companies are going to find other routes, because they don’t want to be stuck in traffic. 24 more than we have already is too many more,” she said, adding that the promise of another exit is many years away.
Babinski also said they have yet to see the increased traffic from other company expansions that she voted for because they were using existing buildings, including James Hardie Building Supply, Tell Tool, and A. Duie Pile, and said the city also has a huge project they want to develop on Cabot and Turnpike Industrial roads.
She said there are issues for Environmental Justice neighborhoods, such as Colonial Pines at the exit, which was there before the exit was built, and is not being represented. She said about comments made that residents should move if they don’t like it. “People have invested in their homes. It’s an insult to them,” she said, adding, “Who came first is a terrible justification for over development.”
Babinski said the traffic is overburdening the DPW Dept., giving the example of ServiStar Road that caved in a couple of times. “Trucks destroy roads because of weight that the roads are not built to handle. What is the total cost there,” she asked.
She also talked about adding more impervious surfaces where there shouldn’t be, about the invisible threat of tail pipe pollution and the need for air monitors, and potential groundwater pollution close to the aquifer.
“What is it going to do to our air, our water. What are the real costs to infrastructure and people; broken roads, costs of road repairs, vehicle damage, potential water and air pollution. Prevention is less costly than remediation or mitigation,” Babinski said, adding to applause from residents, “We do not need more trucks on the north side.”
A motion was then made to close the hearing, and refer the special permit to Zoning, Planning and Development and Legislative & Ordinance committees.
L&O Chair William Onyski amended the motion, saying there was no need to send it to L&O. He pointed to the 90 day clock from the close of a public hearing for the Council to act, or the special permit will be approved by default. At-large Councilor Nicholas J. Morganelli, Jr., who chairs ZPD, said his committee will address the permit at the end of July or beginning of August.