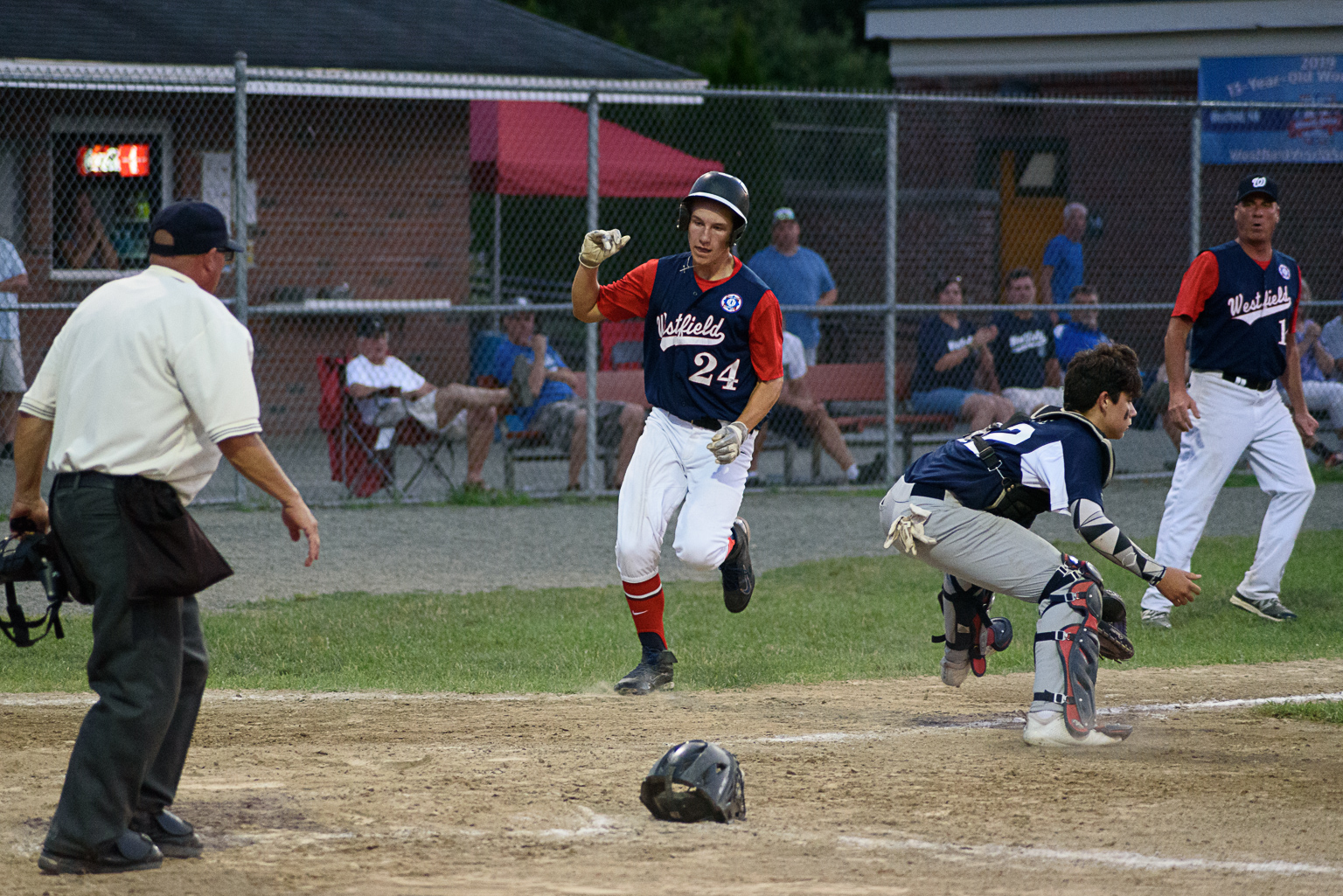 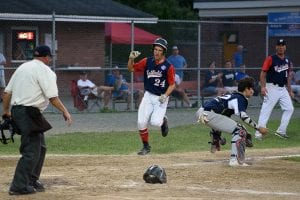 WESTFIELD – Mother Nature was not the only one who brought the heat to Bullens Field this past weekend.
Norwalk (Conn.) continued its hot streak, overwhelming Westfield 11-1 in a mercy-shortened, five-inning game on Day 2 of the Babe Ruth Baseball 15-Year-Old New England Regionals Saturday.
Through the tournament’s first two days, Norwalk had outscored the competition 21-1. By the end of the day Sunday, that had blossomed to 31-1.
Norwalk came out attacking from the outset. Vance Ward manufactured a run from the lead-off position, striking a single through the left side in the first inning, and then stealing second and third bases before scoring on a Jeremy Cooke single to left field.
Westfield unraveled in the second inning.
An infield pop-fly by Ben Boccinfaso that should have resulted in the first out of the inning fell in for a single to begin the second. Two errors sandwiched around a hit batter loaded the bases and resulted in the second run of the game. Another hit-by-pitch made it 3-0. A one-out, bases-loaded walk resulted in a 4-0 lead. Two more walks led to another run and a 5-0 advantage. A sac-fly from Cole Forcellina made it 6-0.
Norwalk pitcher Ali Morin retired eight straight batters to begin the game, and had a no-hitter brewing into the fourth inning before Dylan King broke it up with a double to left center-field. Two outs later, Joey Calderella smacked a run-scoring single to right center field.
In the fourth inning, Norwalk batted around.
Westfield reliever Kyle Dionne, who retired four straight batters during one stretch of the contest, ran into a buzzsaw in the fourth.
Ethan Platt launched a two-run double to left field, Jaden Echevarria ripped a RBI single through the right side, and an outfield error resulted in two runs. Connecticut led 11-1.
Also Saturday, Greater Portland (Maine) defeated Brattleboro (Vermont) 5-1, North Providence-Smithfield (Rhode Island) outlasted Pittsfield (Western Mass.) in extras 8-7, and Keene (N.H.) downed Braintree (EMass) 13-9.

Sun., July 21
Greater Portland (Maine) 16, Westfield 1 (4 inn.)
Portland raced out to a 5-0, first-inning lead and cruised to a convincing, mercy-shortened victory over the host city as pool play came to an end.
Portland loaded the bases in the bottom of the first inning with a pair of hits (Colby Winship, Ryan Thurber), setting the table for Jimmy Gignac, who ripped a two-run double down the right field line. J.T. Fasulo followed with a two-run line drive single up the middle. An error a short time later made it 5-0.
Westfield got on the board in the top of the second. Calderella led off with a lined shot up the middle. Calderella advanced on a fielder’s choice. Danny Provost drove in Calderella with a single up the middle.
Portland put the game out of reach in the third. The big hits in the inning included a two-run triple from Bennett Smith and a two-run double from Anthony Dimillo. Dom Tracy and Gignac also had run-scoring singles in the inning.
Portland ended it in the fourth with four more runs, thanks in large part to Ethan Daniels, who belted a two-run single through the left side and Nate Rende, who blasted a RBI double. A bases-loaded walk ended it.
In other games Sunday, Keene (N.H.) sent Pittsfield packing 15-2, Braintree downed North Providence-Smithfield (Rhode Island) 10-7, and Norwalk (Conn.) shut out Brattleboro (Vermont) 10-0.
The top six teams now advance to the single elimination portion of the tournament format. North Providence-Smithfield (Rhode Island) begins play against Greater Portland (Maine) Monday at Bullens Field at 10 a.m. Westfield-Braintree follows at 1 p.m. Game times were shifted to earlier times in the day in an attempt to avoid the rain expected later in the day.
Keene (N.H.) and Norwalk (Conn.) have earned byes to Tuesday’s semifinals.