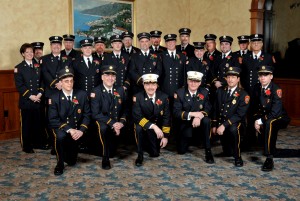 SOUTHWICK – The Southwick Fire Department (SFD) is responding to more calls than ever as the town continues to grow.
Chief Richard Anderson said even before the Halloween snowstorm the department received a record-breaking number of calls.
“We started off October with more calls than we ever had before in the history of the department,” said Anderson, adding there were 98 calls last month.
Last week, the SFD surpassed that amount in just one week, with 108 calls from noon Oct. 29 to noon Nov. 5. Anderson commended the staff, which is comprised mainly of volunteers, for working around the clock last week.
“They handled that many calls and still had to deal without power at home, and they had to go to work,” Anderson said.
The SFD has just three fulltime staff in addition to Anderson. All three are EMTs who work the ambulance on the day shift. At night, it’s all about the volunteers.
“We have very dedicated firefighters and EMTs who answer the call in the middle of the night,” said Anderson. “They respond to a call at 3 a.m. then go to work.”
There are 46 volunteer firefighters and Anderson is looking for a few more.
“I’d like to have 50,” he said.
The volunteers have a variety of day jobs, from pilots to mechanics to business owners. When they leave work for the day, they answer the call to provide firefighting and medical services to the town.
Anderson said the department has evolved over the years as the town has changed.
“Southwick has become a bedroom town with most residents working day jobs out-of-town, a lot in Connecticut,” he said. “It used to be farmers who volunteered.”
Anderson said the addition of full-time staff came a few years ago and he hopes to add a fourth full-time position in the next budget.
“People move here and they expect these services,” said Anderson. ‘And we have five elderly housing complexes and they are taxpayers and need our services, too.”
Anderson said the full-time staff is on the day shift because most calls – especially ambulance calls – come in from 6 a.m. – 6 p.m.
“The 12 – 6 a.m. shift is the tough one for our volunteers,” said Anderson.
Anderson encourages anyone interested in learning more about volunteering to contact him. He said while some volunteers enter the job with experience, the SFD provides training for its firefighters.
“We send them to Firefighter One training and then, if they want to be an EMT, we send them for that course,” Anderson said.
Anderson said the lifespan of the average volunteer is five years, however; there are quite a few exceptions in Southwick.
“We have some longtime volunteers who have family who are firefighters,” said Anderson, noting that he is one of those people.
“My grandfather was one of the charter members of the department,” he said.
When asked why civic service such as firefighting is often a family tradition, Anderson said the answer is pretty simple: “It’s in their blood.”
Anderson acknowledged that the current volunteer system at the SFD is not going to work forever.
“The volunteer situation is not going to be the plan forever,” he said, “but we don’t know when that will change.”