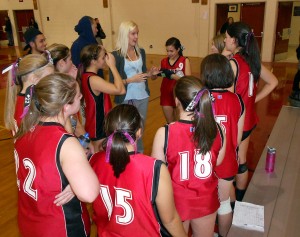 Westfield High School girls’ volleyball coach Lindsay Skaret talks to her players after the Lady Bombers dispatched the Chicopee Pacers 3-0 Saturday night at home in the first round of the western sectional. (Photo by Chris Putz)

WESTFIELD – It was another ho-hum victory for the sixth-ranked Westfield High School girls’ volleyball team Saturday night as the host Lady Bombers easily dispatched No. 11 Chicopee, 3-0 in the opening round of the West Division II finals.
Westfield won 25-17, 25-23, 25-15 to earn a quarterfinal matchup against No. 3 Amherst (14-4) Tuesday night in Amherst at 6:30. The Bombers knocked the Hurricanes out of the tournament last season and defeated them during the 2011 regular season, both in five sets.
“We were a little off our game because we had no practice all week,” said Westfield coach Lindsay Skaret, whose team struggled to gain footing early in the first set Saturday. But as the match progressed, the Bombers finally gained control.
In the first set, Westfield rallied from a 3-point deficit, taking a lead at 9-8 when Jordyn Desmond (8 kills, 9 digs, 3 assists) bent back the fingers of Chicopee’s Andrea Coleman with a bullet of an ace.
Westfield built a comfortable lead behind the solid serves of Kate Menard, and took a 9-point lead on Abigaile Hart’s kill. Hart finished with five kills and two blocks.
The Bombers maintained a large lead and went on to win big, 25-17.
In the middle frame, Chicopee seized a 4-point advantage, 17-13, until Evonne Tapases served Westfield back in front. An ace from Tapases (21 assists, 3 kills, 3 aces) put the Bombers in front 19-17.
Westfield held a slim lead throughout the remainder of the set, and dodged a bullet when one of Chicopee’s best servers failed to get the ball over the net on the last serve of the set.
In the final set, Mary Calabrese served Westfield to a 5-0 lead, capping off the early run with an ace. The Bombers ran away with it.
“It was good to get back into the flow of things,” coach Skaret said. Westfield had been unable to practice most of the week due to school closings as a result of the freak snowstorm that caused widespread power outages throughout the northeast.
Heather White had six kills and 14 digs for Westfield.
As far as the next round is concerned, Skaret said, “It’s going to be night and day.”