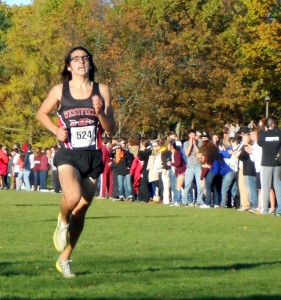 WESTFIELD – The rest of the western part of the state should now be on high alert next weekend when Westfield junior Blake Croteau lines up alongside hundreds of other cross-country runners at the Western Massachusetts championships at Northfield Mountain.
Croteau cruised to a second place time of 15:40.97 during Saturday’s Pioneer Valley Interscholastic Athletic Conference championships at Holyoke Community College. Only Cathedral’s Mark Hegarty was better in 15:33.92 on the 3.1-mile course.
“I was just going out to feel it out,” Croteau said of the course, which was primarily on pavement after storm damage forced a shift in sites from Stanley Park. “I didn’t want to run too hard. Next week is a different race. Today’s a tune-up, next week’s matters. But I’m really proud of our team.”
Teammates Matt Jacobson (13th, 16:11.46) and Tim Dostie (14th, 16:13:08) managed to crack the top 15. The Bombers placed fifth as a team with 168 points.
Amherst won the meet with 64 points, followed by Holyoke (71 points), Northampton (87), and Cathedral (124).
Gateway’s Sam Rexer (80th, 18:02.56), Southwick-Tolland’s Adam Cool (102nd, 18:27.78), and St. Mary’s Felix Chapdelaine (217th, 21:08.13) were the first runners to cross the finish line for each of their respective schools.

GIRLS’ RESULTS: Westfield senior Sierra Swords surprised even herself with a top 20 finish.
“It was a faster race than I thought it would be,” said Swords, who ran to 17th place in 19:49.40. It was the first time all season that the senior broke 20 minutes. Her previous best was 20:42.
“I thought (the race) would be endless but it flew by,” she said. “The hills were definitely better than expected. I kept my eyes on the runners in front of me, and picked them off.”
Swords appeared to take the last-minute change in venues in stride.
“Everyone was pretty crushed that the meet was not at Stanley (Park)…but there was some excitement to run a new course,” she said.
Northfield Mountain, with its hilly climb, will offer a different kind of challenge.
“Northfield is a hard course, but it’s very rewarding,” Swords explained.
On Saturday, Westfield claimed 11th place with 340 points. Amherst (62) was first.
Gateway’s Katie Clark finished 34th (20:55.88), St. Mary’s Julie Carroll placed 49th (21:26.36), and Southwick’s Natalia Riberdy was 53rd (21:31.21).
Longmeadow’s Camille Blackman won the race in 18:02.85.