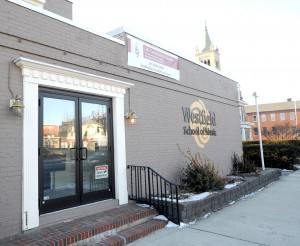 A sign in the door of the Westfield School of Music warns that the premises are under video surveillance but a thief broke in anyway only to be caught by the owner as he walked away with eight guitars. (Photo by Carl E. Hartdegen)

WESTFIELD – The owner of an Elm Street business captured a burglar Saturday who had broken into his business and was making off with an armful of guitars.
City police responded to a 7:47 p.m. report of a burglary and arrived to find a man detaining a thief who had broken into his father’s business, Westfield School of Music on the corner of Elm and Meadow streets.
Det. Sgt. Stephen K. Dickinson was among the officers who responded to the crime and explained that the owner arrived at the scene of the crime before police because he had not alerted police when his alarm company reported an intrusion.
Dickinson said that the man has set up his alarm so that, when triggered, the alarm company does not immediately call police but the system first sends the owner a text message and relays 30 seconds of video from the scene.
Dickinson said that, because there had been a recent false alarm at the music studio, the man was reluctant to ask for a police response when he did not see anything amiss on the video displayed but instead called his son, who was in the area of the studio, and did not see any problem.
Dickinson said, when the younger man returned home, he and his father decided to go back out and check the studio.
When they saw footprints in the recent dusting of snow on the steps of the studio the pair stopped for a closer look, Dickinson reports.
Dickinson said that when the men looked through the glass door they could see a man inside and, before they were seen, they ducked out of the way and called police.
The owner then went around to the rear of the building and arrived in time to see a man walking away while carrying eight guitars.
The owner said that, when he yelled at the man, the suspect dropped the guitars and started walking back to him while attempting to tell him a story to explain why he was carrying the guitars.
When his son joined him, the owner left him there to detain the suspect while he checked on his younger children who had waited in the car.
When Officer Michael Csekovsky arrived, quickly followed by Sgt. Alex Baginski and Officer Richard Mazza, they took custody of Humberto Baez, 47, of 129 North Elm St., who was arrested for breaking and entering a building in the nighttime with intent to commit a felony and for larceny from a building.
Dickinson reports that Baez told him that he had been unable effect entry via a first floor window but was able to knock out a pane of glass at a second floor rear entrance and made entry there.
Dickinson explained that the alarm was triggered then but the 30 seconds of video which was transmitted came from a camera downstairs where nothing had yet been disturbed.
Dickinson also said that Baez has an extensive criminal history.
He said that Baez had served a sentence imposed upon conviction of a rape charge in 1997 and had served a second term after he was convicted of assault and battery on a guard at the Ludlow jail.
He also said that Baez had been convicted in the Northampton court on charges including assault and battery, breaking and entering and larceny.
When Baez appeared for arraignment in Westfield District Court on Monday, Judge Philip A. Contant noted that he has repeatedly failed to appear for previous court appearances and cited his record of convictions when he set bail at $10,000 cash.
Baez was held pending a Feb. 20 hearing.