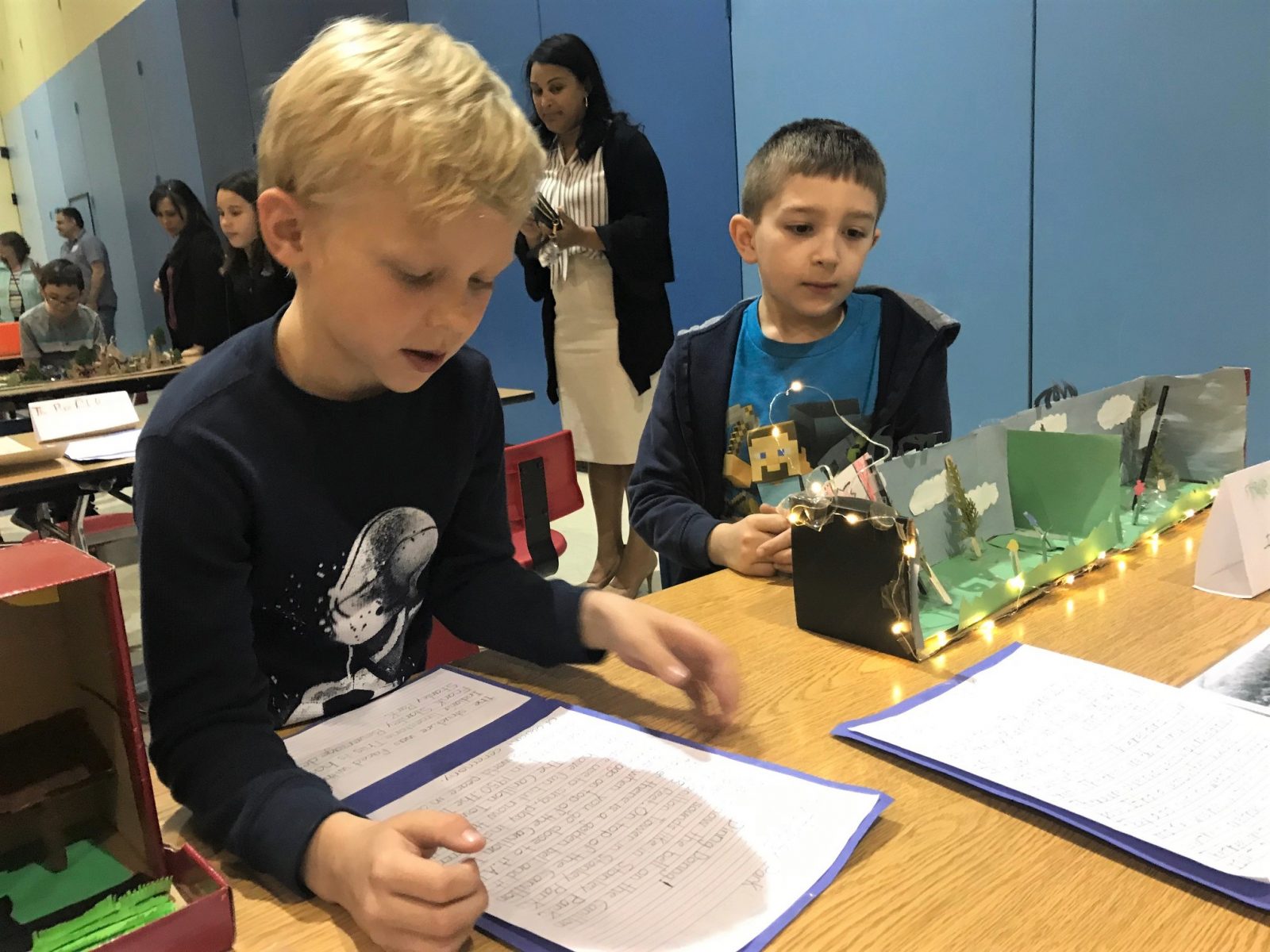 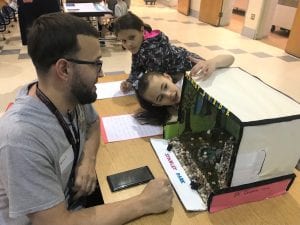 WESTFIELD – Westfield 350 President Harry Rock has said time and time again that the upcoming celebration of the city’s incorporation is really about community. That was evident at Paper Mill Elementary School this week when second grade students presented a Westfield History Fair.

“I knew that Dr. Vanessa Diana from WSU was very involved with the 350 committee, so I reached out to her and asked if we could try to create ways for WSU students to work with Paper Mill students in learning about local history,” said second grade teacher Kathleen Knapik.

That connection turned into a collaboration with WSU students.

“Last month, 50 or so WSU students spent an afternoon with our second graders for lessons and activities on subjects ranging from General Shepard to the Black Squirrel to the Pure Food Movement, to Native Americans, to immigrants, etc.,” Knapik said.

Students said they had fun researching their projects with WSU students and learned new things about their hometown. 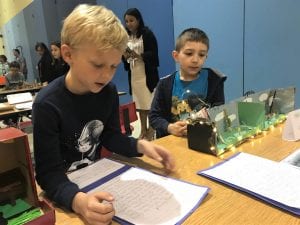 “He found Borax, chalk and even pencil lead,” she said. “It was making kids sick.”

Brooke Potenza said she enjoyed learning about Gen. William Shepard, who is honored with a statue overlooking Park Square Green.

“He served under George Washington,” she said, “and lived near Franklin Avenue School.”

Knapik said she was thrilled with the collaboration and the fair and loved seeing how excited her students were.

“A major goal in my teaching has always been to create connections between the curriculum and the real world’,” Knapik said. “The celebration of the 350th anniversary of the city’s incorporation has created an exciting opportunity for authentic learning in literacy, history, and science.”

After receiving a grant last year from the Westfield Foundation for Education, the school was able to purchase books about local history for its library. Then, Knapik and fellow second grade teachers Samantha Erricolo and Deb Lanoue began planning how to incorporate Westfield 350 and city history into the curriculum this year.

The result was the WSU partnership as well as a Second Grade Speaker Series featuring local historians and community leaders, lessons on Westfield history, the creation of a bulletin board that evolved from prehistoric Westfield to the modern-day city and more.

“The students have thoroughly enjoyed this experience because it’s real — they’re learning about their community,” Knapik said. “They’re fascinated to realize that dinosaurs once roamed this area, that there were volcanoes where our school now sits, that the Woronoakes lived in villages where their homes and apartments now stand. They’re justifiably proud that as they drive around town with their families, they can point out to landmarks and tell them about General Shepard, or Stanley Home Products, or the importance of rivers for the Native Americans and early settlers.”

The 65 second graders were inspired, Knapik said, for a love of history and an appreciation for people who created the city. And they have become engaged citizens, something that makes Knapik particularly proud.

“When we were learning about memorials and monuments, some children wondered whether there was anything in Westfield to honor the Woronoakes, the first people to live in this area,” she said. “This led to some important discussions about our responsibility to honor different people’s experience in history, and the students decided to design a marker that would honor the Woronoake tribe. We are scheduled to submit our proposal to the Westfield Historical Commission in June.”

Knapik couldn’t help but smile when speaking about her students.

“I am so proud that these children raised these questions and developed their own plan to address something they feel is needed in their community.  How appropriate that as we honor our city’s past, these young leaders are poised to guide us into our city’s future,” she said.

The students were also proud of their knowledge and hard work, as were their parents, grandparents and other family members who attended the fair.

“I am so proud of her,” said Yamil Cruz about his daughter Daiann Cruz. “I’m very proud of her hard work – she spent two weeks working on this.”

The Westfield 350 celebration is May 17-19 and includes a community pancake breakfast, Beach Boys tribute concert, fireworks and city parade.