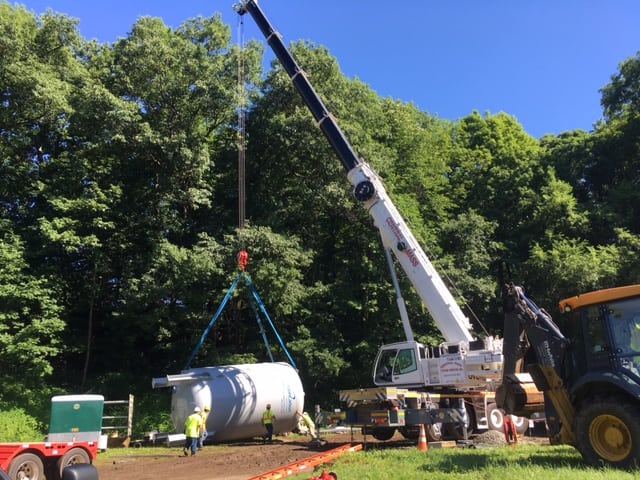 WESTFIELD – The city is not alone when it comes to the impact of PFAS.

State Rep. Kelly Pease is a member of the PFAS Interagency Task Force and said since joining the government committee, he has learned even more about the per- and polyfluoroalkyl chemicals known as PFAS, particularly that there are other communities dealing with water contaminated by PFAS.

“We knew about Westfield and Barnstable, but I didn’t know about Ayer, Acton, Wayland, Easton, Stow and others – all dealing with the same issues we’ve faced in Westfield,” said Pease, adding that “some are not testing as high as Westfield.”

Westfield has been working since 2013 to eliminate PFAS from wells contaminated by firefighting foam used at the Air National Guard Base. Granular Activated Carbon filters were the best solution for Westfield, but it came at a high cost. The city has spent upwards of $13 million in costs associated with PFAS contamination and received $1.3 million from the Department of Defense to help offset costs. Pease said 0 percent loans helped with costs as well,

“It’s challenging,” he said of the cost.

Pease said the task force met last week and heard from small communities that the cost of PFAS mitigation is out of their reach. “The expense of the filters is enormous,” he said.

Pease said the PFAS Interagency Task Force will host monthly meetings to hear from communities and experts on PFAS.

Town administrators, public works employees, and water management officials said during last week’s meeting that more help is needed in cities and towns to prevent and manage the effects of per- and polyfluoroalkyl contamination in water.

Pease said the Task Force is learning more about products that contain PFAS.

“In Westfield, it was firefighting foam at the air guard, but some of these communities don’t have a source at this point – they don’t know where it came from,” he said.

Barnstable officials cite a similar source of PFAS to Westfield.

In Barnstable, Town Administrator Mark Ellis said the issue stems in part from a local fire training academy and to a lesser degree the municipal airport.

Water wells in those areas are managed by Barnstable and Yarmouth but since the wells are aligned closely, any contamination could impact not just one well but a “significant water supply for the regional center of southeastern Massachusetts,” Ellis said.

According to a recent State House News story, PFAS is a term used for a group of chemicals used since the 1950s to create non-stick and water- and stain-resistant products. They’re most commonly found in consumer products like food packaging, outdoor clothing, and leather goods but can also be traced to certain types of firefighting foam that easily seeps into groundwater.

The chemicals do not break down easily and exposure to at least one kind of PFAS has been linked to thyroid disease, kidney cancer, high cholesterol, and testicular cancer, according to C8 Science Panel, a group of epidemiologists who studied probable links between the chemicals and various diseases in 2011 and 2012.

Pease said the Task Force will continue its hearings and compile its finds and recommendations at the end of the year.

“There is a lot we don’t know and we are still in the fact-finding phase,” Pease said, “but I am excited to represent Westfield on this and I want to be part of the solution.”