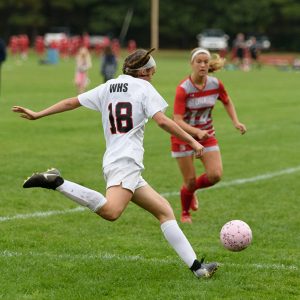 WESTFIELD – A late takeoff by the Bombers proved to be well worth the wait.
After playing to a 1-1 tie, the Westfield High School girls’ soccer team exploded for three second half goals to down visiting East Longmeadow 4-2 Wednesday.
Chandler Pedolzky recorded a hat trick for Westfield. Pedolzky netted the equalizer late in the first half on a pass from Claire Lemarche and had two more in the second half, one unassisted and the other coming off a pass from Isabella Rinaldi.
Kaela Mochak also had a second half score. Georgina Badger assisted.
Maddie Moran scored a first half goal on a pass from Leanna Dalessio. Dalessio scored a second half goal with an assist from Moran.
Westfield goalie Adrianna Arona collected eight saves.

A broken record … almost
Gateway 5, Athol 1
Nina Iglesias and Jessica Van Heynigen scored two goals, and Erin Harris had one goal in a commanding victory. Ava Auclair had two assists, and Becca Heyjek, Charlotte Kazalski, and Van Heynigen each had one.
With two goals and two assists, Heynigen tied Jessica Rida for the school record in points at 104.
Gateway goalie Becca Herman had one save.

GOLF
Rams stay unbeaten
Southwick-Tolland 156, East Longmeadow 161
Southwick stayed unbeaten (19-0) with a win at Elmcrest Country Club.
James Longhi and Matt Garrity led the pack for Southwick each with a 38, followed by Brad Durand (40), and Sam Mizanoglu (40).
Southwick has a week off before returning to action in the regular season finale next Wednesday at home against Palmer.
“We’ll see if we can close the deal,” Southwick coach Al Selden said.

LATE RESULTS – Tues., Oct. 10
JV BOYS’ SOCCER
Southwick-Tolland 2, Central 1
Southwick’s Andy Brown had a hand in both scores, setting up Nate Girard and scoring on a pass from Zach Karetka.