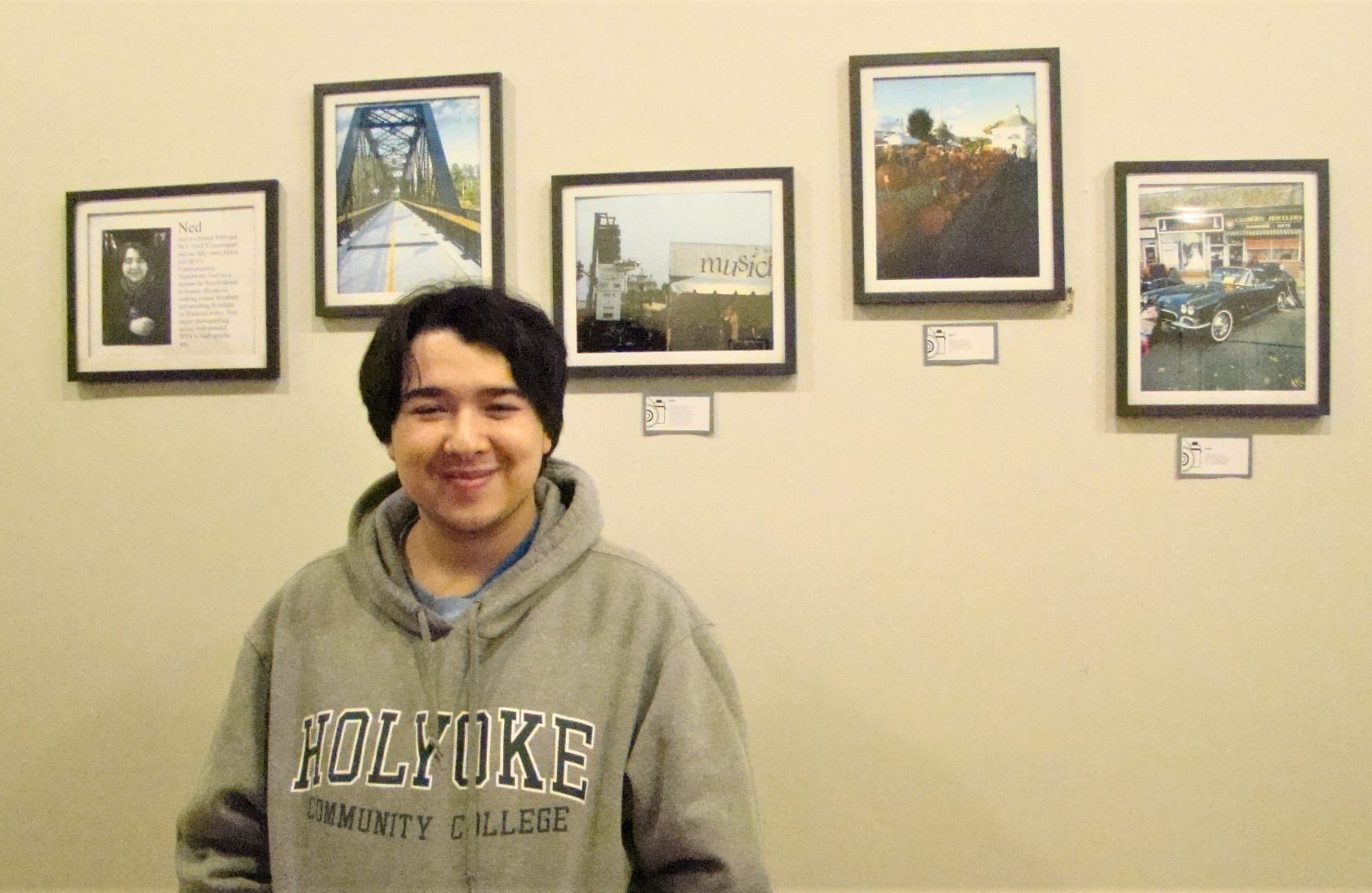 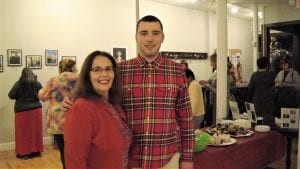 Sherry Elander with Alec, a former East Mt. Road Transition student who is now a paid mentor at Westfield State, at the PhotoVoice exhibit. (Photo by Amy Porter)

WESTFIELD – The Rinnova Creative Arts Center on Elm Street hosted a reception on Tuesday evening for PhotoVoice, a photographic exhibit by students in the East Mountain Road Transition program of the Westfield Public schools, funded by the Westfield Education Foundation.
Four students from the EMRT program, several of whom are dually enrolled through the Inclusive Concurrent Enrollment Initiative (ICEI) at Westfield State University and Holyoke Community College, displayed their photographs for the exhibition and spoke to visitors about them. Sherry Elander, transition specialist for the EMRT Program, who wrote the original grant for the ICEI program, said of the 27 students in the EMRT program, 14 attend college classes at WSU and HCC. 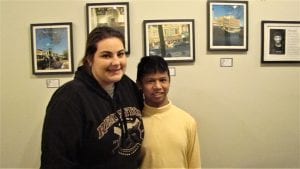 Mangal and helper Crystal Hays discuss his photographs of city blocks in Westfield at the exhibit. (Photo by Amy Porter)

Mangal, a first-year student in the EMRT program took photos of downtown Westfield, and the places he likes to go. One photo showed the city block of Whip City Music, where he likes to go and play guitar. Another is of the Central Baptist altar, where students have lunch after creative art classes at Rinnova. Mangal is also interested in cooking, and the restaurant Alo Saigon is featured in one of the photographs.

Maddie is dually enrolled at EMRT and Westfield State University’s ICEI program, where she takes a photography course. Her photos featured nature and landscapes at the college and Stanley Park. One photo in particular, focusing on the raindrops on a window looking onto a landscape, garnered a lot of comments at Rinnova for its beauty. Maddie also participated in the Yearbook Club at Westfield High School when she was a student there. 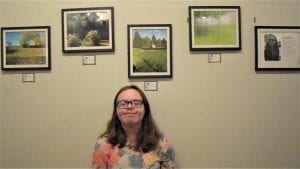 Maddie’s photos featured landscapes at Westfield State, where she studies photography, and at Stanley Park. (Photo by Amy Porter)

Dakota, a former Westfield Tech graphic arts student, could not attend the reception because she was participating in a choral club performance at Holyoke Community College, where she is dually enrolled. Her photographs focused on college life, and one on a dog, showing her love of animals.

Ned, another former Westfield Tech graphic arts and EMRT student is now fully matriculated into the HCC communications department. “I was one of those kids who didn’t want to go to college. Sherry (Elander) said she had one spot at HCC. You start from square one, and you work your way up,” said Ned.
Ned said he enjoys photographing structures and various events in downtown Westfield. Included in his featured photos were ones of a Westfield on Weekends concert and of the Pumpkin Fest on the green. Another photo featured the newly-refurbished railroad bridge on the Columbia Greenway Rail Trail. Ned said the bridge was one of his favorite structures before they turned it into the bike trail, and he was happy they saved it from demolition. “I’m very passionate about Westfield,” he said.
Ty Hanson, who works for the UMASS Boston Institute for Community Inclusion said Photo Voice allowed the students to document and reflect Westfield. She said the project combines photography with social change, to empower students and promote discussion. “Students with disabilities’ voices are not always heard. Through photography, they are able to share their stories,” Hanson said. 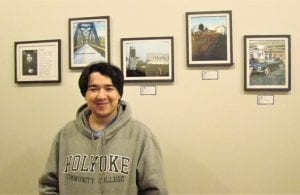 “I am passionate about Westfield,” said Ned of his photos of downtown events and structures. (Photo by Amy Porter)

She talked about another project Ned participated in, called “putting yourself on a digital map.” She said through an app, Ned was able to log himself on campus and elsewhere as he took photos and produced a digital map, allowing him to write a blog and make a video about the life of a college student. He was a keynote speaker at a conference attended by 400 people about the project, and will be presenting at a research summit later this week.
“It’s so exciting seeing Ned taking all the communication classes at HCC,” Hanson said.

Alec, who participated in the digital stories portion of the Photo Voice project, is another former EMRT student who enrolled in the ICEI program at Westfield State. Elander said Alec has just been hired by the college as a paid mentor in the ICEI program. He also works with the basketball team there as a shot changer.
Elander said she requested $1,100 from the Westfield Education Foundation for the PhotoVoice project, and was fully funded. She also gave credit to her WSU intern Mollie O’Connor for preparing the project for exhibit, and thanked Hanson for her involvement and support.