WESTFIELD-Now in its fifth year, the Westfield Police Cadet Program will conduct its toy drive for children – babies through early teens – on Dec. 7 at the Westfield Walmart.

“The cadet toy drive provides gifts for kids that otherwise, might go without,” said Detective Rick Mazza, who runs the cadet program with Westfield officer Christopher Coach. Both men were members of the original Westfield Police Explorers program when they were in high school. 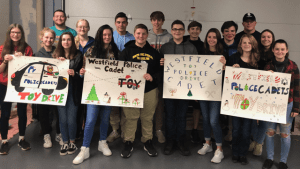 Members of the Westfield Police Cadet Program are hopeful that community members will support their annual toy drive on Dec. 7. (Submitted photo)

The cadet program is open to anyone ages 14-20 including non-Westfield residents who are interested in a career in law enforcement.

“Chris and I, as well as the cadets, donate all of our time collecting, sorting and delivering the gifts to where they are needed,” said Mazza. “From toys and clothes to diapers and baby wipes, it truly is not about want and desire, but the necessity of gifts, diapers and baby items, that some struggle to provide on a daily basis. A small donation on part of our community, friends and family, can really make an entire holiday for the kids and parents alike.”

“We work with Christopher Rogers of the Westfield Public Schools who gives us a list of the number of boys and girls and their ages who are in need of gifts,” said Coach. “If we have an excess of gifts we give them to Laurie Matthews at the Westfield Salvation Army as well as local children’s hospitals.”

Coach added that last year, the cadets were able to provide assistance to more than 200 children in the public schools.

“We will deliver the donations to each individual school on Dec. 9 and then the principal or counselors make arrangements with parents,” said Coach.

For Chris Gage, 17, who has been a cadet for more than three years, the toy drive is a highlight of the commitments made during the year.

“I think there is nothing better than being a little kid and having gifts,” said Gage, adding, “being able to contribute to that makes you feel good about yourself.”

Meghan Lacas, 18, who has been a cadet for four years, concurred.

“The toy drive benefits kids so much,” said Lacas, adding, “our drive lets kids know people are thinking about them during the holidays.”

Madi McCann, 17, a new cadet since May, agreed.

“It is very important to acknowledge that not all families are equal,” said McCann. “Some families have a harder life and all children deserve to wake up on Christmas morning and feel wanted and needed.”

If cash donations are dropped off during the toy drive, the cadets will purchase needed items for the students.

Christopher Rogers, administrator of student interventions and safety with the Westfield Public Schools, coordinates the logistics for the major undertaking each year.

“The Westfield Police Department’s Cadets Program’s annual toy drive is extremely important and appreciated by our school district,” said Rogers. “We are always very thankful for their generosity and community service, especially at this time of year.”

“The cadets’ goal is to help our students in need this holiday season by delivering to our schools what they are able to raise through the drive,” said Rogers. “Last year’s drive was a success and they were able to deliver their donations to every PreK-8 school in our district and we anticipate the same this year.”

Mazza noted that the toy drive is one of the cadet commitments that he looks forward to each year.

“We teach our cadets things like community service, selfless service and teamwork and this event encompasses all of that and shows them that all of their hard work is not in vain,” said Mazza. “Of course, it couldn’t happen without our amazing community or cadets and we thank them all, for its past and continued success, from the bottom of our hearts.”

“Our Westfield community has demonstrated time and time again its ability to help each other and this toy drive is no exception,” said Rogers. “To the police department, the cadets, and to all those community members who donate to the toy drive, please accept our most gracious thanks and know you have helped to make the holidays a little bit brighter for many families in our city.”