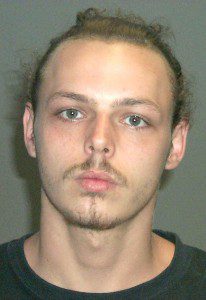 WESTFIELD – City police are actively seeking a young man whose proclivity to violence has kept him in trouble with police and, most recently, has prompted the issuance of two warrants.
Derek Webb, 20, first came to the attention of Westfield police during an incident in 2007.
At that time, West Springfield police had reported him to be a missing person who had left the control of the Department of Social Services.
Det. Sgt. Raymond Manos reports that in 2009 “we started dealing with him” and said that initially “it was minor stuff, verbal arguments” but said that in the same year he first became involved in assault and battery cases.
Westfield District Court records show that since 2009 he has been charged with crimes ranging from trespass to assault and battery with a dangerous weapon.
He has thrice been charged with assault and battery and thrice with assault and battery with a dangerous weapon. He has also faced single charges of breaking and entering, shoplifting, trespass and unlicensed operation of a motor vehicle.
He is of particular current interest to police because of three assaults alleged in a five day period in August.
On Aug. 19, Officer Stephen Gonglik saw Webb involved in a disturbance with another man near the Elm Street railroad overpass and sent both men on their ways.
Gonglik reports that he again urged them to move along a short time later when they were involved in a disturbance near the intersection with Franklin Street and moved them a third time when they became involved in an altercation with a group of youths at a nearby gas station.
A short time later, Gonglik reported, a complainant said that he had been assaulted by Webb, who he recognized, after he left an Elm Street bar. The victim’s companion said that he was assaulted by the man who was with Webb.
Two days later, a Sackett Street resident reported that he had been “jumped” by Webb when he returned home.
The victim in that incident said that he had complained about a neighbor’s radio before he went out and said that when he returned Webb, a friend of his neighbor, assaulted him.
The third recent incident occurred three days later at a Main Street residence.
The victim in that incident said that he had been visiting a friend when Webb assaulted him by punching him repeatedly. The responding officer, Scott Phelon, reported that he observed numerous contusions and laceration on the victim’s face.
As a result of the three incidents, two warrants were issued and police have been seeking Webb in the two weeks which have elapsed.
Det. Anthony Tsatsos, who has taken the lead in the search, said “We’ve been going to places he’s known to hang out” but said that, since Webb is apparently homeless, there is no obvious focus, such as his home or his parent’s home, for the search.
Police have sought him at homeless encampments in the city and found his mother at one of them but she claimed not to know where her son was.
Although Webb has reportedly been seen on a number of occasions, he has thus far eluded police when they responded to those reports.
“He has a history of going to ground when he has a warrant” Tsatsos said.
However, since there are outstanding warrants and Webb seems to have difficulty staying out of trouble, Tsatsos is confident that he will surface, somewhere.
“He’ll get picked up when somebody comes across him” Tsatsos said.
Anybody who sees Webb or knows his whereabouts is urged to call the Westfield Detective Bureau at 572-6400.