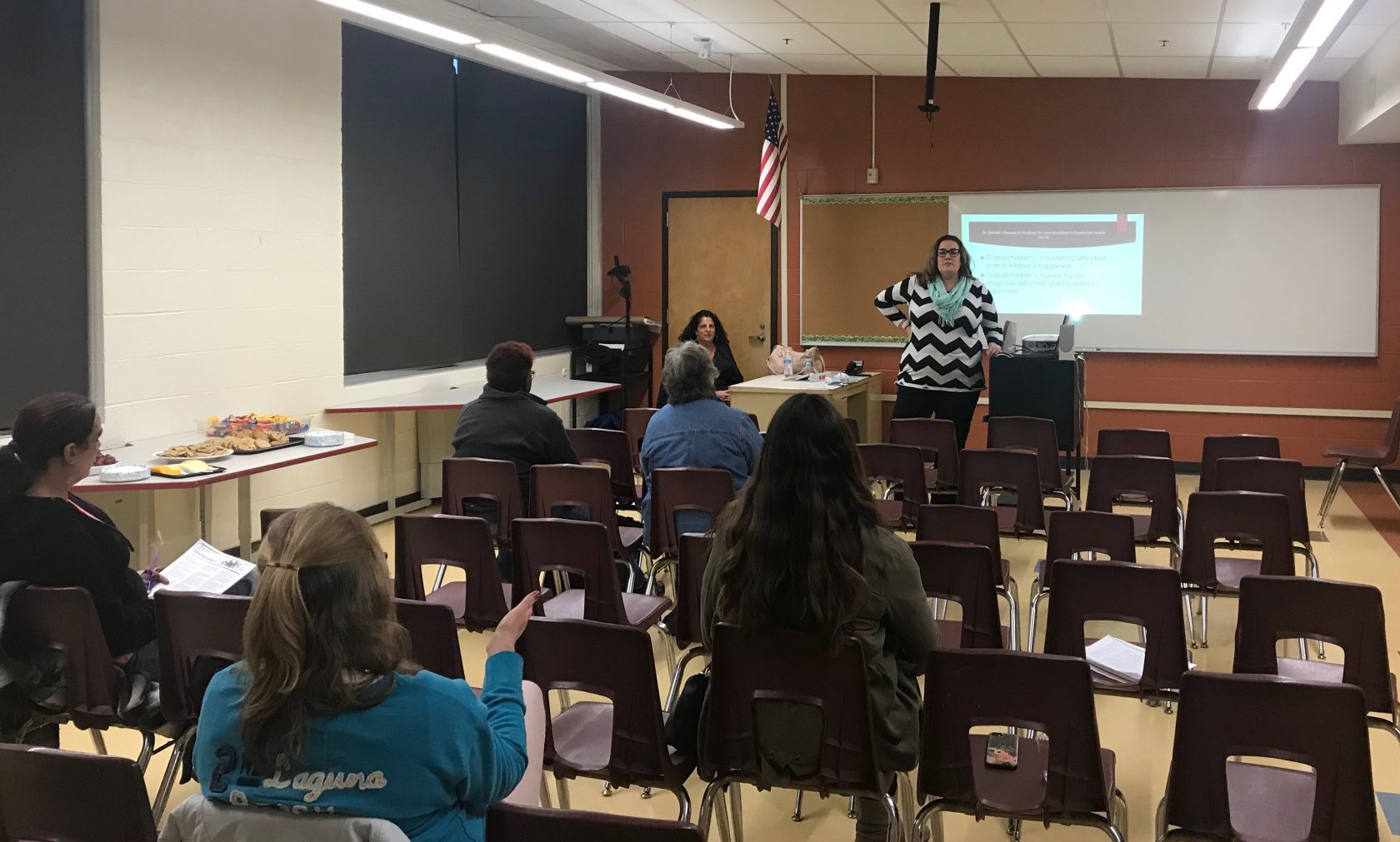 SOUTHWICK – A discussion and informational session for grandparents raising grandchildren was held in the community room at Powder Mill School on Thursday night.

Organized by the school district’s Special Education Parent Action Committee, the event was for those grandparents currently raising their grandchildren and helping guide the grandparents on how to raise, parent, and educate the children who aren’t able to be raised by their parents.

Carolyn Roberts, psychologist for the school district, gave a presentation along with Lina Racicot, Director of Graduate Psychology at American International College. 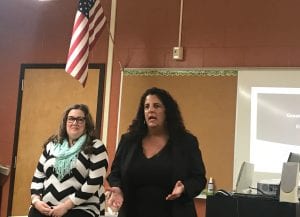 To start, Roberts and Racicot noted that according to the U.S. Census Bureau, 10% of the 65 million grandparents in the United States in 2014 were raising grandchildren. That number has doubled since 1992 when it was 7%.

Whether the child’s parents are deceased, incarcerated, suffering from substance abuse, or another reason, the grandparents have to act like the grandparents as well as the parent and that can cause stress due to the dual identity that they have to possess.

“It’s not about them (grandparents), so they’re not going to say, “I need help,”” said Roberts.

During the presentation from the two psychologists, it was acknowledged that substance abuse is the leading cause of parents not being able to raise their child forcing grandparents into the role of primary caregiver of a child.

The U.S. Census Bureau estimates that the opioid epidemic causes 116 overdoses every day in America.
Racicot went on to discuss the negative impact that heroin and fentanyl have had on individuals leading to parents not being able to take care of their child.

“It’s so sad to be seeing this,” said Racicot. “We’re talking about the younger generation.”

When raising grandchildren, grandparents can go through a number of different stressors, which includes financial and health issues, guilt, isolation, blames, stress, and worry.

“You weren’t planning on raising another child after raising your own,” said Roberts. “This is a group of people that really need our support.” 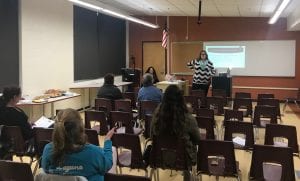 Community members attended an event on Thursday night to learn more about the problems grandparents face when raising grandchildren. (Photo by Greg Fitzpatrick)

Support is something that can be improved upon as there are over 200 grandparents raising grandchildren in Massachusetts that don’t receive any help.

Racicot and Roberts also mentioned that a lot of times the child will blame the grandparent for not having their parent around and therefore causing more stress on the grandparent trying to take care of them.

An issue that some children in this situation face are ACE’s (Adverse Childhood Experiences). Also known as traumatic experiences, ACE’s have to do with the three major categories of abuse, neglect, and family or childhood experiences. The CDC (Center for Disease Control) has reported that ACE’s can lead to negative behavior for children in the future, like health problems and even substance abuse.

A couple of individuals in attendance for the event on Thursday night spoke about their own personal experiences as grandparents raising grandchildren. One woman who wanted to remain anonymous, raises her grandchild and was glad to have different resources available at the event to see if any of them could help her moving forward.

“I was very appreciative to have all the literature that was there,” she said. “It’s great information.”

Another grandmother who also asked to remain anonymous, currently raises two children after her son passed away in a car accident earlier this year. One issue that she’s having is trying to help the children through the loss of their father.

Roberts and Racicot informed those in attendance that if their grandchild attends the Southwick-Tolland-Granville Regional School District, there are resources available to help them like the guidance office or school psychologist.