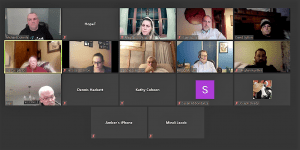 Participants in a Southwick Planning Board Zoom meeting Jan. 19, 2021. (SCREENSHOT)

SOUTHWICK – Residents in the Lexington Circle neighborhood were heard loud and clear by the Southwick Planning Board, which voted 4-1 Jan. 19 to deny a Verizon cell tower request.

After nearly four months of continued public hearings, the board closed the hearing on Jan. 5 and voted Tuesday.

Voting to deny the request were board members David Sutton, David Spina, Richard Utzinger and Associate member Jessica Thornton. Marcus Phelps cast the only vote in support of the proposed tower. Planning Board Chair Michael Doherty recused himself because he is a neighbor of the property and was informed during one of the hearings that the tower could affect property taxes in area and he did not want the appearance of a conflict.

Residents were vocal from the start of the process that they did not want the tower in their neighborhood, despite the cell coverage improvements touted by Verizon representatives.

The town-owned property is in the middle of a residential area, yet is within the town’s cell tower district.

“This came forth when the [cell tower] bylaw was being written,” noted Doherty after the meeting Tuesday.

The bylaw does not allow for the installation of cell towers in residential areas. Doherty said that was the main sticking point for those who denied the request, as were the options for alternative sites not far from the proposed site.

“They were talking about looking out for the residents and there wasn’t a single resident who spoke in support,” Doherty said.

The residents rallied together from the beginning.

“The residents did get together a large number of people and hired an attorney,” Doherty said. “They spent serious time and money.”

Ultimately, the bylaw had to be upheld and Doherty said he believes the other board members may consider revamping the cell tower district and bylaw soon.

The Planning Board will meet Feb. 9 via Zoom to give its official denial to Verizon.