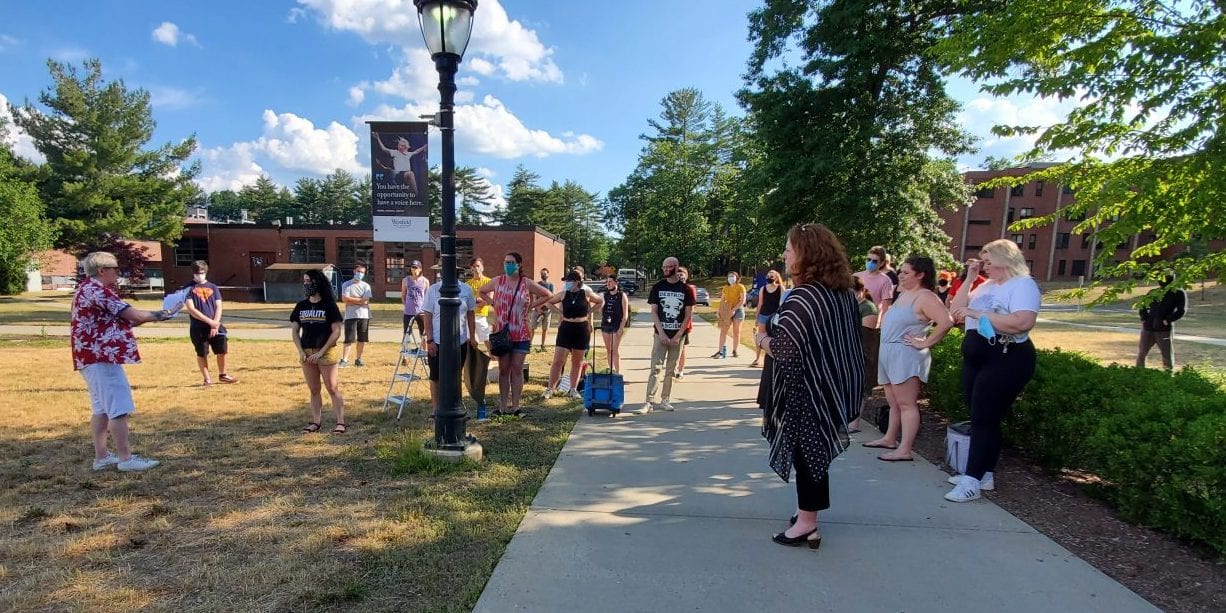 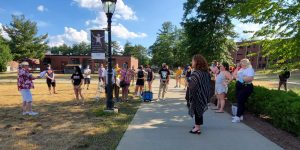 WESTFIELD- Dozens of students gathered on the green of Westfield State University Monday afternoon to protest the university’s handling of an incident in which leaked messages depicted a student seemingly threatening a woman on the dating app Tinder.

The protesters gathered in front of the Ely Campus Center to ask representatives of the WSU administration to explain their handling of the situation so far. Earlier this month, screenshots of messages sent over  Tinder showed an apparent WSU student arguing about current events involving policing in the United States.

The male student in one message responded to the woman by saying that “cops are the reason [you’re] not raped every day.”

When the woman responded saying that he did not make any sense, he sent a reply that was interpreted by some as threatening.

“Who’s to stop someone like me from raping [you] without the cops,” said the student, “You? What would you do if I were to metaphorically rape you?” he wrote.

WSU students Krystle Melanson and Angela D’Agata organized the protest in which they decried WSU and other universities for what they see as a failure to protect students from sexual assault. The accused student is apparently a criminal justice major at WSU according to the leaked screenshots. Criminal justice is the largest major at the university.

Melanson, D’Agata, and several other students shared their own experiences with sexual assault. Several times the point was made that when someone goes through a traumatic experience such as rape or sexual assault, it tends to define, and ruin, their whole life going forward.

They also pointed out that police officers rarely, if ever, are able to stop a rape in progress, despite the attitude of the accused student.

“We’re not going to be able to provide the level of detail that you are requesting. I know that is frustrating. I get that. We understand that. We hear that,” said Oliver, “But that doesn’t mean that we are not taking these matters really seriously.”

The protesters expressed frustration at the lack of information, but said that they understood that Oliver was not the one making the decision to say little.

Oliver cited the Family Educational Rights and Privacy Act (FERPA) as the reason for not providing more information. Melanson pointed out some apparent loopholes that would allow for the administration to be more transparent in the investigation.

Oliver said there is no estimated date for a resolution to the situation.

“If Jack (the student in question) is on campus in the fall then the safety and well-being of your students is not a priority,” said Melanson.

Near the end of the standout, several students said that they were embarrassed to be a student at WSU. Many of them threatened to transfer schools and tell their friends to not bother enrolling there.

Much of the students’ anger and frustration at a lack of action was directed at WSU President Ramon S. Torrecilha, who is set to retire next month. Melanson and the rest of the protesters said that they would be back again next Monday at 4:30 p.m. to protest, and that they would like to see incoming interim President Roy H. Saiga be there personally.

“We’re embarrassed to be [at WSU] right now,” said Melanson.

Following the protest, Oliver provided The Westfield News with the following statement:

“Today, a group of students and others visited campus to share their concerns related to deplorable exchanges on social media. Westfield State University administrators were on hand to listen to their concerns. The input from those who attended today’s protest is significantly valued and will be taken into consideration as we work to investigate and resolve these serious matters.