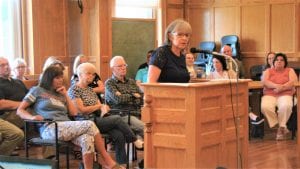 WESTFIELD – More than a dozen residents and department heads came out to speak at the posted public hearing on the fiscal year 2020 budget on Tuesday. The majority of residents expressed concern for rising taxes, and urged the City Council to take a hard look at the budget and make some difficult cuts, while a couple of department officials urged their budgets to be spared.
Kate Phelon of Hillside Road said she was there as the executive director of the Greater Westfield Chamber of Commerce, and also as a resident. “You need to cut the budget,” Phelon said. She said there are some opportunities to have reputable companies come in to the city, but the Council had to make some difficult decisions and cut where they can.
“I am going to ask every person where they think we should cut,” City Council President Ralph J. Figy said to Phelon when she had finished speaking. Phelon responded that she had not come prepared to make those suggestions.
Robert Pearson suggested that the city go to Raytheon and try to get one of their plants in Westfield.
Donna Vella of Joseph Avenue said she agreed with Phelon. Vella said in local, state and federal governments, every department is encouraged to spend every nickel in its budget, whether they need to or not, adding that she was speaking for a lot of their constituents.
Vella said the unfortunate part is employees could not be fired, and no one is held accountable for poor decision. “It’s important for every citizen in the City of Westfield that you have their best interests at heart,” she said, adding, “Before you spend any money, be frugal.”
Figy responded to Vella’s assertions, saying that the city had swept the budget and come up with $1 million to cover a shortfall in health insurance. “I think department heads in Westfield are as conscientious as you want them to be,” he said. He also said employees had been fired.
Figy said he agreed with what Vella was saying, and asked for her suggestions on where to cut, to which she responded that she was not prepared to give any.
Following a point of order made by At-large Councilor Andrew K. Surprise that Figy should not engage the speakers, Vella said she could defend herself. “There is something wrong when spending continues to increase. I would be happy to come in and meet with the Finance Committee,” Vella said. She said the city doesn’t need brick sidewalks or flower pots that they don’t have the money to maintain. “We need water,” she said.
Westfield Public Schools Chief Financial Officer Ronald R. Rix stepped up to ask for support of the school district budget. “If you look at the details of our budget, we’ve proposed a budget at no cost to the city, plus $800,000 savings in insurance costs (to the city),” Rix said, adding that last year they gave back $700,000 for positions that they didn’t fill.
“I’ve never seen a budget that covers all of its increases, including health insurance, and gives back to the city,” Rix added. 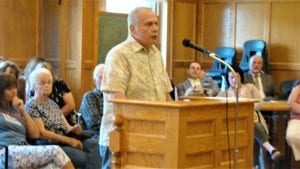 Former Councilor William Chiba said the Council had to go line by line through the budget to make cuts. (Photo by Amy Porter)

One resident of Harvest Moon Lane said she had lived there for 13 years, and in that time, her taxes have almost doubled. “We can no longer afford to live here,” she said.
Bernard Rosenblum brought forward a list of ways to cut, including a hiring freeze, and accelerating the collection of unpaid taxes. He said over the past four years, taxes have increased for residents from 19.44 to 19.67 per thousand.
“I’ve lived here for close to 30 years. I will continue to live here. It is affordable compared to other communities. The roads are not good,” Rosenblum commented, adding, “The City Council has done a very good job the last four to six years. Cooperate, not confront each other. We’ve got to work together. Cutting expenses is the way to cut taxes.”
Kristen Mello of Westfield Residents Advocating for Themselves (WRAFT) said she wasn’t going to speak up at the meeting, but “you asked.” She said she could recommend some areas where there is money on the table, but urged the council to support the arts, theatre and music in the schools, noting “there are no stringed instruments.”
Mello mentioned the interest rate on the water and municipal bond, going to the Air National Guard, and whether Westfield Gas & Electric is sitting on some money regarding water. “You’re walking away from money in environmental enforcement,” she said, adding, “Charge the polluters, take that income and supply clean water to the north side.”
Laura Pisano said she had lived in Westfield for 30 years, was approaching retirement, and was one of the people questioning whether she should stay or go down south. “A lot of people are thinking of leaving,” she said.
“We don’t need frivolity. We need good roads and good drainage,” Pisano added.
At-large Councilor Dave Flaherty came forward as a resident of Marla Circle. “My numbers show a $3.9 million increase in spending,” he said. Flaherty said even though roads are the number one complaint of residents, there is still only $400,000 in the Public Works budget for road construction, which he said should have increased with the meals and hotel taxes.
Regarding schools, Flaherty said they are spending 3.1 percent more with one fewer school, and 37 fewer employees, adding that they also haven’t negotiated labor contract increases.
“I’m going to be proposing almost $2 million in cuts,” Flaherty said, adding that he hopes the same people who argued about spending $10 more for stormwater fees would support them.
Former councilor William Chiba said for a 6 p.m. public hearing, it was “a pretty good turnout.” Chiba also said regarding the budget review meeting to follow the public hearing, “You can’t do that. You didn’t go line by line through the budget.” He said he did budgets in the city for 20 years, and some of the meetings lasted until 2 a.m.
“Good luck to you. Hope you do well tonight,” Chiba said.
Flood Control Commission Chairman Al Giguere said the city hadn’t maintained its flood control for years, and called it “critical to Westfield.” He also said the FCC had a meager budget.
Giguere said the Powder Mill and Armbrook Dams were in need of hundreds of thousands of dollars’ worth of repair. He asked the councilors to spare the FCC budget, which he said gets less than animal control. “We do need big cuts, I agree with everyone here. I just ask that you spare the Flood Control Commission. It’s critical,” Giguere said.