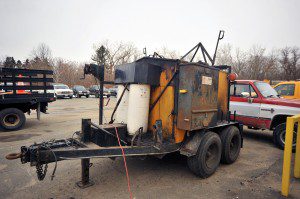 An asphalt hot box machine sits in the rear of the Westfield Department of Public Works. (Photo by Frederick Gore)

I am assuming that Mr. Berry is the one that wrote the response to the person asking about the Hot patch machine aka HOT BOX. First of all you should get the correct information before answering the question. I saw last year you did the same, this year I have to respond. How it works. In the summer or fall you get mix and put it into manageable chunks and stack them. In the winter when you need to patch you start the hot box and put the chunks in and they heat up and are just like mix that you buy all summer. They are for use all winter. Second where in the PURCHASING LAWS do you find where you can only purchase $ 5,000 worth of asphalt? Maybe a city law NOT STATE LAW. Look up Chapter 30 B. I can bid as much or as little as I want where I work, and I can assure you that I have to use these laws. I am not trying to slam you but please get you facts straight first.

This is response is to the PulseLine article pertaining to the person asking the question on where the tar machine that the city bought years ago is. Where is it? Why isn’t it being used? The response from Friday’s paper was that you had to wait for Lane to open up for asphalt. Well that answer is incorrect. You don’t need asphalt for this machine. You use blocks of tar, which is then placed in the machine and heated up. Then it is sprayed in the hole, lightly, then you put cold patch in there and tap it down, then spray a light coat on top which will hold the repair until a permanent repair can be made. Your response was wrong. I don’t know who gave you that information. It would be nice to find out where the machine is. A lot of taxpayers’ money is being wasted and vehicles are being ruined because this machine isn’t being used. It might be a good idea to ask the DPW where this machine is. In the past, other pieces of equipment have been purchased with our tax dollars, but they are no longer seen being used, and we don’t know where they went either. It would be good to have the truth about where our stuff is going.

Your reply to the blacktop issue is crap.

Southwick, like Westfield and other communities in the region, is trying to control its pothole situation. “We have new ones popping up every day,” said Department of Public Works (DPW) Director Randy Brown. “We’re out there patching whenever we can.” Southwick DPW generally uses a cold patch process in winter. The town has a “hot box,” which is a machine that takes used pieces of asphalt, such as old curbing, and heats it. Brown said the hot box product is not working well and cold patch does a better job. “We’re looking into using the hot box but the cold patch, although not ideal, is holding up better,” he said. The hot box is used throughout the year. “We do use it during the rest of the year – we get a better product putting a hot mix in it – but when trying to use used asphalt the product doesn’t hold up,” said Brown. Brown said the biggest concern with filling potholes is moisture. “The real issue is making sure the hole is dry and has no snow inside it,” he said. “If it has water in it and you put a patch in it, that water will break up the patch.”