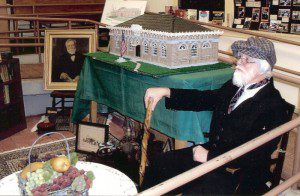 Actor Richard Clark will perform a free show as Andrew Carnegie Dec. 10 at the Southwick Library. A raffle to benefit the library will be drawn that night.

SOUTHWICK – The Friends of the Southwick Library is sponsoring a gift basket raffle through Dec. 10 to benefit programming at the public library.
Friends member Pat McMahon said winners will be drawn on Dec. 10 prior to a performance by actor Richard Clark, who will perform “Great Scot, It’s Andrew Carnegie” free to the public.
The baskets are on display at the library, which is also where tickets are for sale. Tickets are $1 each or six for $5 at the circulation desk.
Library programs have been historically supported by the Friends of Southwick Library and the Southwick Cultural Council.
“With the Cultural Council’s reduction in grants, we are not as able to provide as many funds as we would like,” said McMahon, who also serves on the Council.
The Friends typically raises funds through book sales.
“We heard raffle baskets were successful for other libraries and wanted to try it,” McMahon said, noting that Southwick’s raffled was modeled after a similar successful program at the Agawam Public Library.
All 14 baskets were donated by local residents and businesses and include a variety of themes, including scrapbooking and spa treatments.
They are very different and very creative,” McMahon said.
McMahon said in the age of technology, libraries remain significant, particularly in small towns such as Southwick.
“A lot of people don’t have a Kindle or Nook, or even if they do they like the feel of holding a book,” said McMahon.
In Southwick, free computer access is a big draw for library patrons, who do everything from reading online periodicals to applying for jobs.
“And the children’s programs are very good,” McMahon said. “They really reinforce reading, literature and writing.”
In addition to its resources, the Southwick Library is a place for the community to come together.
“It is a gathering place,” said McMahon. “And our library has a popular collection of current titles and authors.”
Richard Clark is an actor with over thirty years of experience in New England regional theater, New York Theater and television. He is a graduate of Clark University and studied at the American Academy of Dramatic Art, The Actor’s Connection, and the Actor’s Loft in New York City. His Keeping History Alive series brings historical figures such as Mark Twain, Andrew Carnegie, Clarence Darrow, John Barrymore, Ernest Hemingway and William Shakespeare back to life. His shows are based on biographies, autobiographies, personal letters, books and the works of various playwrights.
The Dec. 10 event starts at 6:45 p.m. with a short annual meeting, followed by the raffle drawing and performance. A cake will also be presented as refreshment in honor of the Southwick Library’s 125th anniversary.