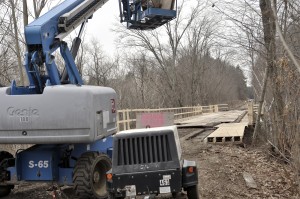 WESTFIELD – The second half of the Columbia Greenway rail trail will be completed thisfall, extending the multiuse trail from the Southwick town line to East Silver Street.
The contractor, ET&L Corporation of Stow, laid the first coat of asphalt last week and continues to work on the two bridges in this phase. The Tin Bridge over Little River is being rehabilitated and two observation decks are being added to the structure. The second bridge over South Meadow Road is also being constructed.
City Engineer Mark Cressotti said the contractor laid the base coat of asphalt and poured an eight-foot-wide sidewalk on East Silver Street linking the trail access ramp to Coleman Avenue.
“The last update is that they do expect to be done ahead of schedule,” Cressotti said. “They have to put down the second coat of paving and anticipate the start of installing the railings on the two bridges in August.”
The original construction timetable was to complete the trail, being funded through a $2 million state Executive Office and Energy & Environmental Affairs grant, by November.
“Now it could be done, depending on the weather, toward the end of September,” Cressotti said.
The rail trail, because of the funding requirements, was divided into three phases, the South Phase, from Southwick to East Silver Street, the Central Phase, from East Silver Street through the downtown to Orange Street and the North Phase, from Orange Street across the Westfield River to Women’s Temperance Park.
The Central Phase comes with the highest price tag, an estimated $7 million because it involved replacement of bridges over East Silver Street, Main Street, Thomas Street, Chapel Street and Orange Street.
The former railroad bridge across Elm Street will not be replaced. It will be raised to increase clearance to 14 feet, 6 inches. The cost of rehabilitating and raising that structure is projected at $1.4 million.
Cressotti said the city is looking at all possible funding sources for construction of the Central Phase.
The high cost estimate is due to the fact that the former railroad is a raised structure running through the downtown. That fact is what makes the trail unique, as there is only one other multi-use raised trail in the country, but also creates other issues, such as privacy and funding.
The North Phase, rehabilitation of the former railroad bridge over the Westfield River, is currently on the Transportation Improvement Project funding list for $2.2 million that would become available in the fall of 2015, the start of the federal fiscal year 2016. The federal year begins on Oct 1 of the previous calendar year.
The South Phase was divided, again because of funding, into two parts. The first part completed by Mass-West Construction, Inc., of Granby which submitted the low bid of $1,288,876, included construction and paving of about 4,000 feet of the rail trail, installation of drainage to prevent erosion and protect adjacent wetlands, and construction of a 60-space parking lot abutting the trail.
The second part of the South Phase is now underway by ET&L Corporation which submitted the low bid of $2,297,538 to construct the next three quarters of a mile of the trail, work that includes extensive bridge work.