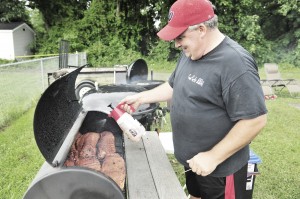 Luke Beauchemin, a member of the Cow Pucks BBQ team of Westfield, sprays a fine mist of water on a rack of slow-smoking meat as part of Grill’n Daze in Southwick, Sunday. The annual event is sponsored by the Southwick Rotary Club. (Photo by Frederick Gore)

SOUTHWICK – Southwick Days organizer Joseph Deedy said the three-day carnival was a success, with the Parks and Recreation’s fireworks display drawing crowds Friday night.
“It was packed for the fireworks,” Deedy said. “I wish we could have fireworks every night to draw crowds.”
Deedy, a Rotarian, business owner and selectman, got the carnival rolling in response to community outcry when the annual Fireman’s Carnival was canceled this year and the Parks and Recreation Commission was concerned about funding fireworks. Southwick Rotary Club stepped in at Deedy’s urging and the 60-plus year Southwick carnival tradition continued.
“It was great,” said Deedy. “We are looking at making improvements, such as signage for the event, and improved entertainment Saturday, but we are happy . . . it was a success.”
Fireworks Friday night kicked-off the event, which continued Saturday afternoon with children’s entertainment, and ended Sunday with the Rotary’s annual Grillin’ Daze competition.
The carnival owner has agreed to come back next year with more attractions and Rotarian Robert Fox said they are already planning for next year.
“It was good,” said Fox. “We’re a small group, but we have some hard workers. We got the carnival together in five weeks and people were happy that we were able to keep the event going. We’ll do it again with everybody in town participating.”
Deedy said this morning he was going to collect fireworks donation cans from businesses around town and he expected the Rotary would “break even” on the event. 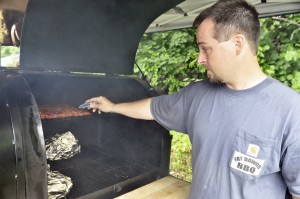 Pete Coppa, team captain of Fat Dawgs BBQ of Southwick, uses an electronic thermometer to check a piece of meat during Southwick Grill’n Daze at the Southwick Recreation Center, Sunday. The annual event was part of Southwick Days and sponsored by the Southwick Rotary Club. (Photo by Frederick Gore)

Fox, a BBQ connoisseur, said although Sunday started off a bit wet, the competition went well and nine competitors offered some delicious barbecue.
Taking first place in the chili competition was Fat Dawgs of Southwick. Bam Bams of Connecticut took second place, and Smokey O’s of Westfield earned third place. Smokey O’s took the first place ribbon in the poultry division, with Fat Dawgs and Bam Bams taking second and third place, respectively. The pork competition heated up with Bam Bams taking the lead, followed by Rudieye BBQ of Agawam, and Cowpucks of Westfield. The main event – the beef competition, was won by Fat Dawgs, followed by Bam Bams in second place and Rudeieye in third.
A panel of local celebrity judges – including The Westfield News owner Patrick Barry – had the enviable task of sampling all the BBQ offerings.
Fox said the “one disappointment” of the weekend was the cancellation of the vintage baseball game because of the rain.
“We’re hoping to reschedule that this summer,” he said.