STOCKBRIDGE – It’s a family affair double feature at Berkshire Theatre Group in Stockbridge, where Erik Tarloff’s new play, “Cedars” is having its world premiere. The play is a bedside monologue in a hospital room (at Cedars-Sinai in L.A.), where a son (James Naughton) is confessing, justifying, and emoting to a comatose father who offers no response. Naughton, two-time Tony Award winner, is directed by daughter Keira Naughton, who has already done some great acting and directing at Berkshire Theatre Group.
James Naughton may look and sound familiar to many. He grew up in West Hartford, Conn. and graduated from Conrad High School. He played Meryl Streep’s husband in “The Devil Wears Prada”, and he nabbed his Tony Awards for “City of Angels” and “Chicago”. He’s the official voice of Audi and a frequent narrator for PBS’ Nature.
Tarloff, the best-selling author of “Face Time”, and writer of over 100 sitcom episodes for “M*A*S*H”, “All in The Family”, “The Jeffersons” and “Alice”, has written a portrait of Gabe, a 50-something lawyer, who is coming to terms with a dwindling career, divorce, dating, and relationships with his children. In a 90-minute monologue, Gabe speaks to his father, hoping for approval and acceptance, both unlikely from the comatose dad. Tarloff’s writing is laced with wry commentary and occasional very funny laugh lines. 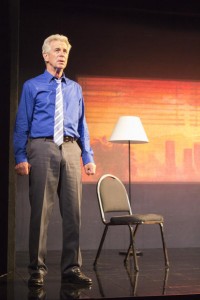 Keira Naughton, aided by Hugh Landwehr’s set which provides a compact playing space on the large Fitpatrick Stage, gives “Cedars” a fast pace. Landwehr’s hospital room design, with an institutional feel but no hospital bed, tubes, or machines, gives the Naughtons a stage which is both a playing space and possibly the inner mind of Gabe.
It takes incredible technique to pull off a one-person show. Hal Holbrook as Mark Twain, Julie Harris as Emily Dickinson, Jefferson Mays as Charlotte van Mahlsdorf, and Bette Midler as Sue Mengers, had the control, stamina, and depth to triumph onstage. James Naughton is simply brilliant. He looks terrific, his voice is smooth and emotive, his gestures just right, and his nuance was great.
Laurie Churba Kohn costumes Naughton in a variety of contemporary outfits appropriate to a lawyer’s casual attire. Solomon Weisband’s lighting enhances the playing area, and Scott Killian’s music bridges the quick costume changes.
“Cedars” is not family fare. It explores adult situations. “Cedars”, however, is interesting theatre, and certainly a feather in Berkshire Theatre Group’s hat. Kudos to Tarloff and the Naughtons.
“Cedars” is the second of three new works on Berkshire Theatre Group stages this season. The theatre hosted a reading of a new musical, “Sometimes Love” with Richard Chamberlain earlier this month, and Eric Hill’s “Poe”, a portrait of the haunting poet Edgar Allen Poe, will be produced in time for Fall foliage season.
The Berkshire Theatre Group presents the world premiere of “Cedars” by Erik Tarloff. Directed by Keira Naughton. Scenic design by Hugh Landwehr. Costume design by Laurie Churba Kohn. Lighting design by Solomon Weisbard. Sound design by Scott Killian. Stars James Naughton. Through August 9. The Fitzpatrick Main Stage, Stockbridge, MA. For tickets: 413-997-4444 or www.berkshiretheatregroup.org.
Mark G. Auerbach studied theatre at American University and the Yale School of Drama. He’s worked for arts organizations and reported on theatre for newspapers and radio.