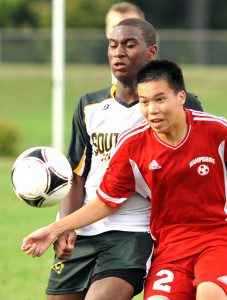 SOUTHWICK – The Southwick boys’ soccer team wound up  neither on the losing nor winning side of things in its opener yesterday. The Rams tied the Hampshire Red Raiders 0-0.
“It’s early in the season,” said Southwick coach Frank Montagna, who had hoped to come out on top in the first game. “It was a combination of inexperienced kids not playing together and early season jitters. But we shut them down defensively.”
Senior Tim Reardon (3 saves) and freshman Patrick King (2 saves) combined for the shutout in net. Senior captain Ross Lebo and junior Ryan King in the backfield helped the two keepers.
Southwick nearly pulled out the victory late.
With about 10 minutes remaining, Rams’ senior forward Andrae Campbell curled a bending ball around a defensive wall of players on a free kick. But the goalie made a diving save to preserve the tie.

Gateway 0, Palmer 0
Palmer scored with eight minutes left on the clock, but an offsides call nullified the potential game-winner. Gateway escaped with a scoreless tie.
“It was a good effort,” Gateway coach Tim Gamble said. “We got a point out of a pretty good effort, against a good Division I opponent. I’m not thrilled but I’m happy with the effort.”