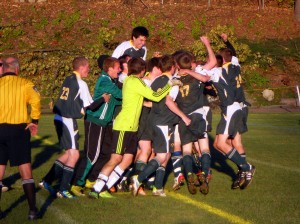 PALMER – What power outage?
The Southwick-Tolland Regional High School boys’ soccer team may have gone more than three-quarters of the Western Massachusetts Division 2 opening round game without a goal, but the defending champion Rams rallied for two goals in the final 13:23 of regulation before tallying the game-winner in double overtime to defeat No. 5 Palmer 3-2 Sunday at Legion Field.
Southwick junior Mark O’Neill scored the team’s first goal in the 86th minute off a rebound, and made the tying goal on a beautiful header from less than 10 yards out with just less than 10 minutes to play. Andrae Campbell assisted on the play.
Campbell also set up the game-winning goal, feeding Anthony Whitehead, who drilled the shot from about 40 yards away to keep Southwick’s repeat hopes alive.
“It feels amazing,” said Whitehead, one of several Southwick players fortunate to have their season extended despite finishing with a sub-.500 record. The Rams’ final two games were cancelled due to the freak snowstorm that hammered the northeast a week ago, but a waiver allowed their team and others to compete in the postseason.
Whitehead nearly won it for No. 12 Southwick (7-8-2)  in the first overtime period, but a Palmer defender stepped into an open net to turn away the potential game-winner away at the last second.
Palmer was also a bit fortunate in building its 2-0 lead too, the Southwick coach explained.
“They capitalized on some early mistakes,” Southwick coach Frank Montagna said of the opposition. “We let some opportunities go by the wayside.”
Faced with a 2-0 deficit, Southwick turned up the intensity and began to pepper the Palmer goalies with one shot after another in the second half.
“In the second half, we were more fit, we had more guys to rotate in, and we didn’t miss a beat,” Montagna said. “In overtime, we turned it on.”
A monumental task looms ahead for Southwick. Next up for the Rams: No. 4 Monument Mountain (10-3-3) on Tuesday.

Franklin Tech scored 17 seconds into the game, and tallied three more goals in a shutout of Voc-Tech.

Holyoke Catholic held serve with the home victory in the opening round of the D3 tourney.

Ashley Bovat and Rebekah Santiago each had one goal and one assist for Westfield, which received scores from six different players. Bombers’ goalie Briana Kubik had seven saves.