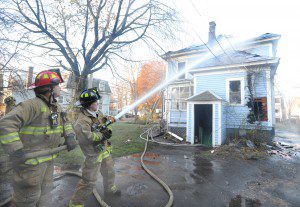 WESTFIELD – One person was rushed to Noble Hospital early this morning after city firefighters braved a smoke-filled burning building at 26 Noble Avenue early this morning to rescue the person found inside the house.
City police report that an alarm was received at 12:30 a.m. Monday and Officer Chris Coach was the first to arrive at the apparently single family house.
Coach was soon joined by Officer Michel Cekvosky and the officers were advised by bystanders that one person was believed to be inside the building which was fully involved in flames.
Capt. Hipolito Nunez, a spokesperson for the department, said that the officers immediately attempted to enter the house but, when they were able to open a door, found “the whole first floor was filled with smoke.”
The officers regrouped and arriving firefighters took over the rescue effort, entering the smoky house in search of residents.
Nunez said that after a ten-minute search, the firefighters emerged with one man who was immediately transported to Noble Hospital for treatment.
The firefighters then directed their full efforts to fighting the fire and the blaze was brought under control but stubborn hot spots in the attic were still sending smoke into the sky at daybreak as firefighter continued to pour water into the smoking building.